Obama loves to demonize all the “fat cat” bankers jaunting around the globe in their corporate jets, eating caviar on their yachts. That stalwart of the middle class, that defender of “the little guy” Barry Obama dukes it out with those greedy Wall Street goons on a daily basis on our behalf and complains that we should be thanking him.

Except the woman behind the man, Valerie Jarrett, just happened to be Director of the Federal Reserve Bank in Chicago from January 2006 until April 2007. She also just happened to resign from this job at about the same time as Obama began his fight for the little guy and joined the presidential fray. She just happened to be a slum lord extraordinaire, making millions off of the misery of the poor.

She is really "Big Brother".

She is always 10 feet away
just out of the camera shot. 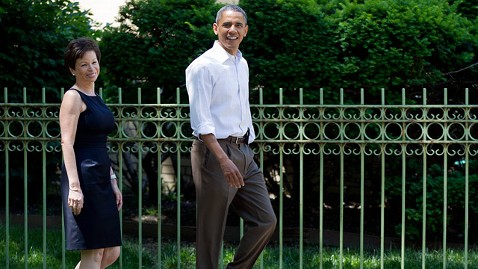 How did a committed socialist become head of the FRB in the first place?

Maybe some of the conspiracy theories have a place in fact ...

[”Not only was Barry’s ‘mentor’ a card-carrying member of the Communist party USA, who carried the water for Stalin during the dark days of the purges, Valerie Jarrett’s father-in-law was too. - Frank Marshall Davis and Vernon Jarrett were good buds, who helped to build up the fledgling Communist party in Hawaii."]

Obama doesn’t realize the unemployment rate is so high because in his world the communist unemployment in the US is ZERO. Priority one after booting OB in November clean out the communist infested rats OB let infest our government.

The fact that most of us know that Barry’s probable bio daddy Frank (Pop)...and his connection with V-jay-jay’s FIL....But the msm doens’t touch it...as they don’t touch the down low thang.... How pathetic.

It’s all coming out, via algores’s interwebs. Drip, drip, drip.

Dust off the popcorn machine.

Things are going to get interesting!