So, it's under way and, using a memorable turn of phrase from a colleague, India soared over the first Commonwealth Games hurdle by producing a vibrant and polished opening ceremony with a mass singing of Jai Ho at the end it would be hard to ever forget.

It's certainly an event Nottingham's badminton star Nathan Robertson will remember - being a flag bearer for your country at a major games is quite something.

He'll be looking to shine, but will have to wait his turn.

My job out here will often be to get to the sports which are getting less attention from BBC Sport's live and highlights programmes.

So today I'm at the archery, interviewing Grantham's Simon Terry amongst others.

He qualified comfortably for the elimination round but, in common with all England's archers, wasn't exactly stoked about his performance. Better to come, I'm sure.

And, as I write, Rebecca Adlington has got safely through to the 200m freestyle final in the pool as she goes for a tough 200m, 400m and 800m treble. Loughborough's Jo Jackson qualified even quicker - in fourth.

Games organisers will be delighted to at last be up and running after all the bad publicity.

I'll be honest, some venues are far from perfect when you step away from the athlete's area but the archery venue where I am now is spot on.

And there's plenty you can't fault - the welcome, the pride and the food for starters.

Entertainers perform underneath a giant aerostat at the Jawaharlal Nehru Stadium. 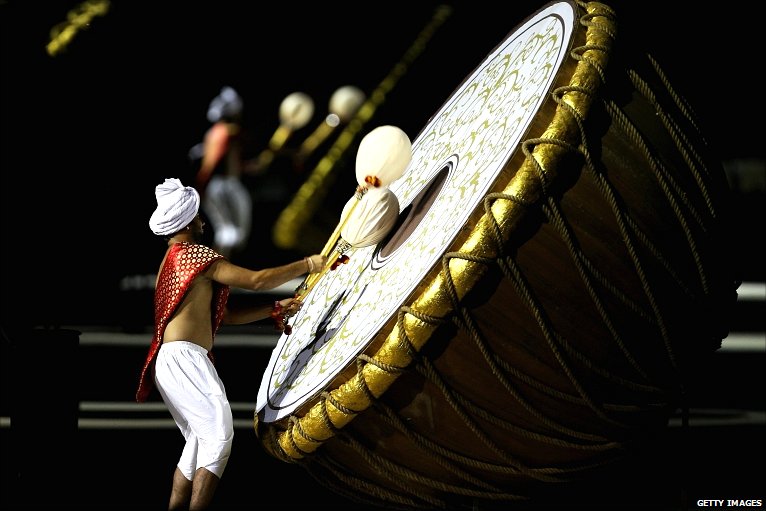 Traditional Indian drumming as part of the early section of the 54 nation Commonwealth Games. 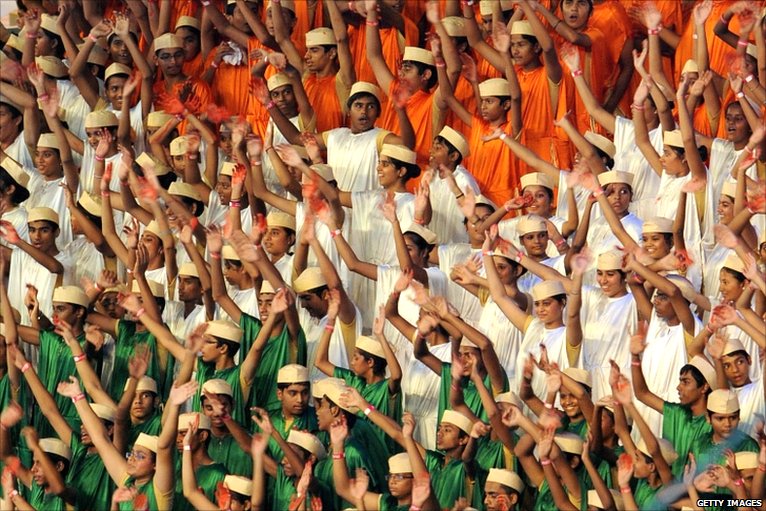 Unity of the Nation. 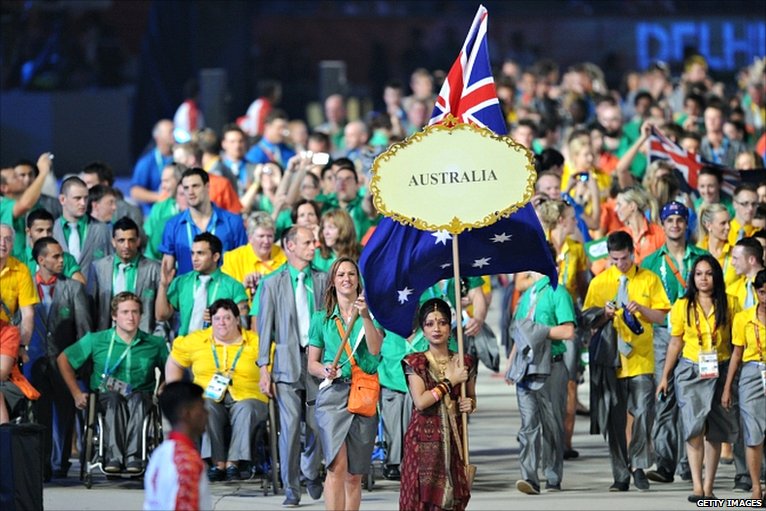 Australia, the host of the Melbourne Commonwealth Games in 2006, was the first in the parade of Nations. 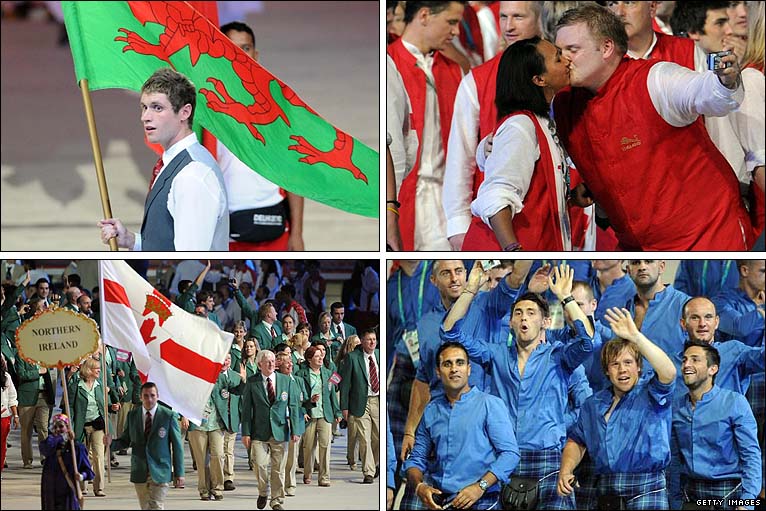 Is India planning on bidding on the Olympic Games anytime in the near future? 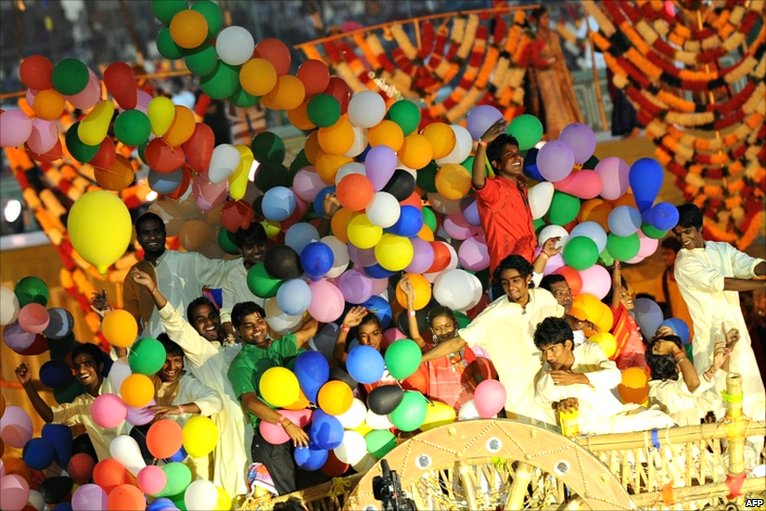 A Procession of floats, with the hustle and bustle of Indian Life follows. 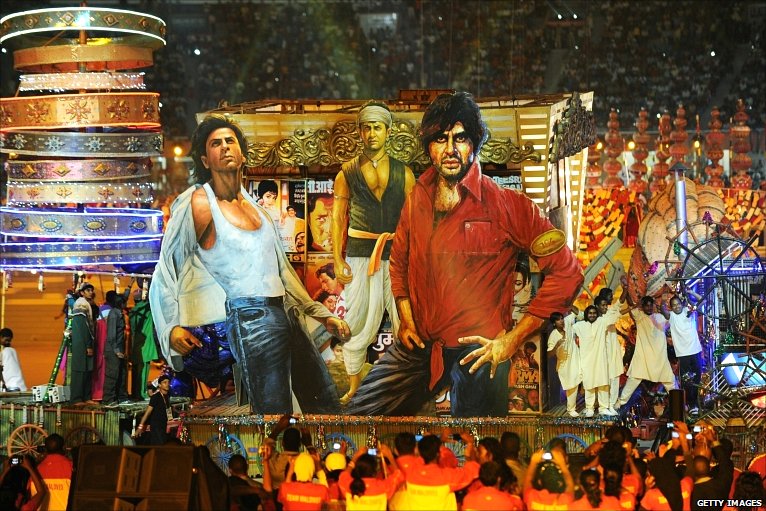 The success of the Bollywood film industry is celebrated before the show is closed with Indian legendary film star -- AR Rahman singing Jiyo, Utho, Bado ,Jeeto, the musical finale from the Oscar winning -- Slumdog Millionaire.

RE: Is India planning on bidding on the Olympic Games anytime in the near future?

Well, after Rio 2016, and if these Commonwealth games are deemed a success, I don’t see why 2020 can’t be possible.

It was just 2 weeks ago when people were afraid that they would not be ready (with some man made bridge collapsing and some of the venues that required a lot of cleaning). Well, apparently they did it. You can do a lot of cleaning with a billion people.

Now the next question is this -— WILL THIS GAME EXTRAVAGANZA MAKE MONEY ? OR DRAIN MONEY FROM THE ECONOMY ?

lolol, i hope not.

The people of Delhi and India have been absolutely disgusted by the incompetence, graft, and corruption of the authorities.

In fact, many middle and upper class families have planned getaway excursions while the games are on.

City is on a security lockdown that makes everyday life a hassle filled gauntlet.

Great picture of the Scottish team.

From a fiscal point of view, I have a very strong feeling that these games will end up COSTING the Indian Government Money.

They will have to pay for this LONG after the games are over.