1. ObamaCare’s centerpiece, a Medicare-like “public option,” would cause millions of Americans to lose their employer-provided health insurance.

Millions of employers would choose this new “option” for their employees. The Lewin Group, a prominent consulting firm, estimates that under a widespread, Medicare-like “public option,” 118 million Americans would lose their private health insurance and be switched onto government-run care.

President Obama wants to control health care’s rising costs. In the free market, that goal can be met through increased competition and choice. With the government in charge, there’s only one path to that end: rationing care.

3. ObamaCare would cost a fortune, and we’re already running higher deficits than during the Great Depression.

ObamaCare would cost a fortune, and we’re already running higher deficits than during the Great Depression — even when expressed as a percentage of our gross domestic product. Our GDP is now about 250x higher than during the Great Depression. Incredibly, our federal deficit is now about 400x higher (from $4.5 billion to $1.8 trillion). In inflation-adjusted dollars, we are now running the highest deficits in our nation’s entire history, higher even than during the Civil War or WWII. Only 55 percent of this year’s budget ($2.2 of $4.0 trillion) is coming from tax revenues; the rest is being borrowed.

White House budget director Peter Orszag says that every other federal program’s effect on future deficits will be “swamped” by Medicare and Medicaid. The last thing we need is a new Medicare-like program and an expansion of Medicaid...

Number one should be the fact Federal health care is unconstitutional! No where in Article 1 Section 8 is it expressly written Congress has the power to regulate health care and yet very few are making this point!

I am still not sure, is there an 11th reason, LOL 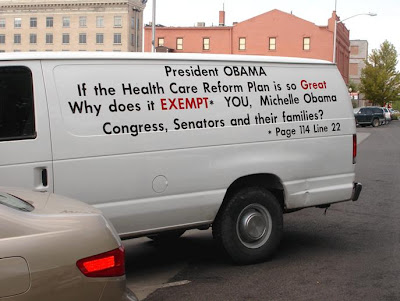 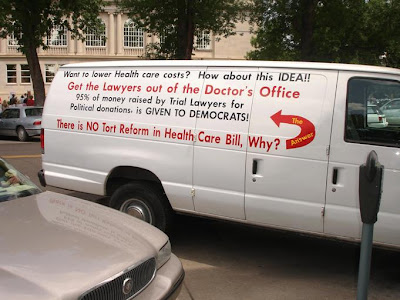 The reflection of the truck is in the car next to it though ... so I thought maybe they were real ... but who knows?

Maybe they are real. Either way, a great idea. Let the masses actually see page references.

11. There’s no going back to ANY sort of private insurance, should we be unhappy with the “public” option.

9 posted on 08/27/2009 10:37:43 AM PDT by Lou L
[ Post Reply | Private Reply | To 1 | View Replies]
To: Man50D
I made that point in my letter to the editor this morning. Congress tends to shoehorn a lot of what they do into the interstate commerce statement, but the definition of commerce requires an actual good to change hands. That's just one of the many reasons to kill this program.

Here's a copy of the text of my letter to my representatives and the local media:

I’m writing to ask your support in opposing the national health care bill. This bill is a huge mistake that will cost American taxpayers trillions of dollars. The current American health care system is the best in the world; People from countries with socialized healthcare come here for treatment.

Past attempts to “fix” the health care in this country, like Medicaid, resulted in bloated programs that cost over 9 times what they were estimated to cost when they were created. President Obama has said he won’t support a health care reform bill that will add to our exploding deficit. But the Congressional Budget Office says these proposals will increase the federal deficit. I don’t see any way that this program can be solvent without a huge tax increase.

The exclusion of pre-existing conditions in the proposed bill sounds nice, but in reality it will be a disaster. Why will people pay for insurance if they can wait until they’re sick and get it then? Insurance depends on people who will make few claims balancing out the people who make many. This won’t happen with the new system and the only people on it will be the most expensive to insure. This ultimately drives up costs and forces the remaining healthy people so go elsewhere (as happened in Maine).

States like Maine, Massachusetts, and Hawaii have tried socialized medicine and in all cases the cost is many times more than the estimates and the result has been a failure. People who have private healthcare insurance drop their coverage to enroll in the government programs and costs skyrocket.

The bills impose an individual mandate on me to buy health insurance approved by the Federal government. What will happen to me if I don’t go along? Will non-compliance penalties apply to illegal aliens the same as to American citizens and legal aliens?

Despite claims by the Whitehouse that the program will not include illegal aliens, the figures that they use in their argument for a “failed system” of 47 million uninsured includes them. Attempts by Republican lawmakers to add verbiage to specifically exclude illegal aliens has been blocked. How is it fair that I pay for the medical care of people who have ignored our laws and haven’t paid into the system?

The bill requires employers to provide insurance for all employees or face a fine. This will cause small businesses to cut back or drive them out of business. The end result will be that entry level jobs will disappear and the tax base will shrink as small businesses go under. The newly unemployed will have to use the public option, but will not have money to pay for their share. The burden then falls on the remaining taxpayers.

Governors of both parties have strongly objected to current proposals, saying that mandated expansion of Medicaid will put an intolerable fiscal burden on struggling state treasuries and taxpayers. This is essentially an unfunded federal mandate that will push the states into bankruptcy.

As currently proposed, “qualified” health insurance plans must include all “essential benefits” as determined by federal officials. The majority continues to force inclusion of elective abortions as an “essential benefit,” insurance companies must provide and taxpayers must subsidize. What will you do to protect insurance providers and citizens whose consciences require them not to provide or finance elective abortions?

Exploding medical malpractice claims are driving doctor and hospital malpractice insurance premiums ever upward. This increases scarcity of doctors in certain high-risk fields, like obstetrics, which decreases access and increases cost. Why are there no provisions in any of the bills to rectify this problem? If you want to decrease medical costs, you need to have tort reform, reduce the cost of doing business for health care providers, and encourage people to become healthcare professionals.

As it stands today, the favored bill contains a “public option”—a government-run insurance company “to keep the private insurers honest.” Will this government-run company pay taxes, pay for its own revenue collection and marketing costs, and pay market interest rates on its debt? Or will it enjoy government backing that will enable it to undersell its private competitors, swallow up their customers, and become a new “Medicare for Everybody”?

Medicare is $36 trillion out of actuarial balance and will run out of hospitalization benefit funds by 2017. How will the government-run “public option” insurance company avoid turning into another Medicare disaster? And how will our senior citizens on Medicare continue to get medical services?

And I’ve saved the best for last. What gives the federal government the right to do this? There is no Constitutional mandate that allows the federal government to take over health care. In the past Congress has misused the interstate commerce statement to justify its interference in the free market. (The Constitution gives Congress the power "To regulate Commerce with foreign Nations, and among the several States, and with the Indian tribes." The word "regulate" meant, at that time, to make regular, or uniform.)

In summary, this bill is unfair to taxpayers, it will drive up the deficit, it will hurt the people it’s designed to help by eliminating jobs and limiting healthcare for the elderly, it’s unconstitutional, the provision to force Americans to pay for abortions is immoral, and it’s anti-free market.

On another note...I looked up page 114 Line 22 and don’t see this. Are there different versions of the plan?

The constitution limits the federal government to a few enumerated powers.

Nowhere can I fine the clause allowing them to control my health care choices.

All other points are moot.