STOCKHOLM, Sweden - Birgit Nilsson, whose prodigious voice, unrivaled stamina and thrilling high notes made her the greatest Wagnerian soprano of the post-World War II era, has died. She was 87.

A funeral was held Wednesday at a church in her native town of Vastra Karup in southern Sweden with only her closest relatives attending, said Fredrik Westerlund, the church's vicar. He did not know when Nilsson died or the cause of death.

Born on a farm in Vastra Karup, Nilsson reigned supreme at opera houses around the world during her long career, which began with her debut in 1946 at the Stockholm Royal Opera as Agathe in Weber's "Der Freischutz" and continued until the mid-1980s when she retired.

She sang a wide variety of dramatic soprano roles, but her reputation was based especially on her mastery of a handful of the most punishing in the operatic repertory. Chief among these was Isolde in Wagner's "Tristan und Isolde," which she sang for her sensational debut at New York's Metropolitan Opera in 1959.

She was immediately hailed as a worthy successor to her fellow Scandinavian, Kirsten Flagstad, the Norwegian soprano who owned the Wagner repertory at the Met during the years leading up to WWII.

Other parts Nilsson made her own included Bruennhilde, the warrior maiden of Wagner's "Ring" cycle, the title role of Elektra in Richard Strauss' opera of the same name, and the heroine of Puccini's "Turandot."

At her peak, Nilsson astounded audiences in live performance with the unforced power of her voice, which easily cut through the thickest orchestrations, and with her remarkable breath control, which allowed her to hold onto the highest note for seemingly endless amounts of time. Her interpretive powers grew as her career developed, and she became a moving artist as well as a vocal phenomenon.

Her reputation for dependability was sealed and a piece of operatic lore was written on Dec. 28, 1959, when she sang a performance of "Tristan" opposite three different tenors. Her scheduled co-star, Karl Liebel was ill, and so were his two "covers," Ramon Vinay and Albert DaCosta. Met general manager Rudolf Bing perusaded each of them to go one for a single act so the performance wouldn't have to be canceled.

Nilsson also was renowned among her colleagues for her playful sense of humor. Once asked what was the chief requirement for singing the role of Isolde, she replied: "Comfortable shoes."

Johanna Fiedler, in her book about the Met, "Molto Agitato," tells the story of Nilsson's unhappiness with the gloomy lighting on which Herbert von Karajan insisted for his production of the "Ring." To register her objections, she appeared on stage during one rehearsal wearing a coal miner's helmet with searchlight.

Another legendary Nilsson moment occurred after one of her frequent battle-of-the-high-note contests with tenor Franco Corelli during the second act duet from "Turandot." Enraged that no matter how he tried she could hold onto the climactic high C longer than he could, Corelli apparently got his revenge during their third-act love scene by biting her on the neck instead of kissing her. Nilsson is said to have telephoned Bing to cancel her next performance with the explanation, "I have rabies."

Nilsson's last appearance on the Met stage came more than a decade after she retired, when she took part in an April 1996 gala celebrating music director James Levine's 25th anniversary with the company. After some gracious remarks, she launched into Bruennhilde's "ho-yo-to-ho" battle cry from "Die Walkuere," delivering — at age 77 — a performance that would have been the envy of any younger soprano.

Nilsson made her Swedish debut at the Stockholm Royal Opera in 1947 in Verdi's "Macbeth." In 1954 she received the title "Hovsaangerska," or court singer, for her contributions to Swedish opera.

Even before that, she had dazzled audiences. Her first major foreign engagement came on June 20, 1951, at the Glyndebourne Festival near London, then as Elettra in Mozart's "Idomeneo." Early in 1954, she performed with the Vienna State Opera, and later that year made her first appearance at the Bayreuth Festival.

She sang at the opera houses of Milan — where she scored one of her greatest successes in 1958 in "Turadnot" — Naples, Venice, Rome, Florence, Munich, Zurich, Lisbon and Barcelona as well as major cities in France and Belgium.

Her music education started at age 3, when her mother, an accomplished amateur singer, bought Birgit a toy piano, on which she learned to pick out melodies.

"I sang before I could walk. I even sang in my dreams," she told reporters soon after her opera debut.

After retirement in 1982, she continued to teach master's level courses in singing.

Although she studied at Sweden's Royal Academy of Music, Nilsson said she learned most of her musical skills on her own.

"I'm mostly self-educated. I discovered early how wonderfully easy it was to sing in big localities. In small rooms my voice got tired," she told a Swedish reporter once.

Nilsson married Swedish restaurateur Bertil Niklasson in 1949. The couple had no children.

Her Brunhilde is one I still listen to frequently. She deserved a Viking funeral, in the flaming boat out on the water! :)

What a great voice! Now, it's gone. A sad day for opera lovers.

A great voice and a fine person. I'm glad she had 87 years!

As long as it's not Brigitte Nielsen.

I guess it's over. [dark humor]

If you want on or off this list, let me know via FR e-mail.

For years now I've had an autographed photo of Nilsson on my desk. The greatest -- then, now and forever. 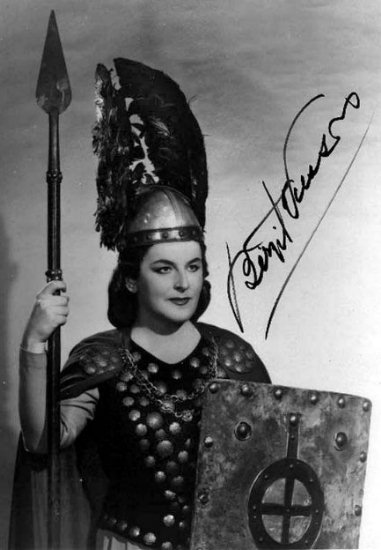 But she was never fat!

Dang, I figured Uncle Junior or maybe Paulie Walnuts would be the next ones to go.

Not to worry. They're still--I mean she's still--hanging in there.

A sad day indeed. It's hard to imagine someone that formidable ever going.

Needless to say, I never saw her perform.

Is it true some of the music at her wake consists of dragging some cats claws down a blackboard?