During Nowruz, people of Iranian descent celebrate the arrival of spring, a season of rebirth. This joyous occasion provides an opportunity for Persians to cherish their rich heritage and enjoy the company of family and friends in anticipation of happiness and blessings in the year ahead.

This year's observance comes during a challenging time for our Nation and the world. As the international community works to face great challenges and embrace important opportunities, America remains committed to peace, justice, and opportunity for all people. Throughout this time of renewal, we remain dedicated to bringing hope and freedom to troubled regions around the world.

Laura joins me in sending our best wishes for a joyous celebration to you, your families, and your relatives and friends in Iran.

The great Persian celebration of New Year, or the Nowruz, has long scattered its shining rays upon Persian history.  It is a glorious celebration that marks the rejuvenation of nature, thus highlighting the deep-rooted connection between the Persian psyche and the environment, and exploring the metamorphosis of the earth as measured against the hidden regions of the human spirit.

Nowruz is of particular cultural and indigenous importance to the Persian people, for it marks the first day of the Persian calendar.

Much has been said and written of the history and mythology of Nowruz, yet its origins remain hidden in the mists of time.

As concerns mythology, Persians consider Jamshid, the fourth pishdadi king of Iran, to be the founder of this national celebration.  Since then, it has given rise to numerous tales and legends that have passed from generation to generation, changing form with each retelling.

Jamshid’s reign is remembered as one of the golden era of Persian history.  Food was plentiful and in endless supply; animal husbandry flourished; men, beasts and plants lived long and fruitful lives; and pure human virtues replaced dark and impure ones.

Ebn-e Balkhi writes of King Jamshid’s rule: “During three hundred years of his reign, the world was radiant as a bride, and all godly and earthly evils were lifted from its face; no creature knew pain or illness in those three hundred years, and the inhabitants of the earth were safe and sound, immersed in the plenty of God’s blessings…

Jamshid was consumed by his pride of these blessings, and fell upon the devil’s ways… he called forth the people and the demons, and said to them: ‘It is clear to you that I have banished all hardship, pain and evil from your lives these three hundred years, and this has come about at my behest and by my power…  no sooner had he uttered these words… that he lost all glory and wealth, and the angels, that had been bidden to attend him at all times, departed from his side.”

The day Jamshid designated as Nowruz, was the day he commanded a throne of ivory and teak to be built, and that he should be seated upon it and carried between earth and sky.  It was done, and the moment that the first rays of the spring sun lit upon Jamshid’s throne was designated by him as Nowruz, “the new day,” and the first day of the month of Farvardin.

“Jam ordered the demons o build him a throne, and as soon as it was finished, the throne was lifted, with Jam sitting upon it, and moved from Damavand to Babol in a day.  People were astonished to see their king upon the throne in the sky, shining like the sun.  They believed that there were to suns in the sky.  This event took place on the day of Urmazd of the month of Farvardin.  The people later gathered round his throne and said, ‘this is a new day.’  And this day was named the New Day, or Nowruz. He ordered the next five days to be celebrated.  The word shid, which means ‘shining,’ was added to Jam’s name, and henceforth he was referred to as Jamshid.”

Many scholars believe the Darius’s reign to have begun in summer, and to have ended in early spring.  The Avesta, the holy book of the Zoroastrians, makes no mention of Nowruz or its rituals.  Bahar believes this may be due to the fact that Nowruz was not celebrated in eastern Iran.  Manichaean and Pahlavi texts however speak of Nowruz as the celebration of the beginning of the year, the Dinkard, an ancient text dating to the 3rd century BC and written in Pahlavi, speaks of Nowruz as one of the oldest celebrations of Iran.

Many scholars believe the Darius’s reign to have begun in summer, and to have ended in early spring.  The Avesta, the holy book of the Zoroastrians, makes no mention of Nowruz or its rituals.  Bahar believes this may be due to the fact that Nowruz was not celebrated in eastern Iran.  Manichaean and Pahlavi texts however speak of Nowruz as the celebration of the beginning of the year, the Dinkard, an ancient text dating to the 3rd century BC and written in Pahlavi, speaks of Nowruz as one of the oldest celebrations of Iran.

The inscriptions and reliefwork of the Achaemenid era, the people of that era celebrated Nowruz as an ancient ritual.  Representatives from various nations, such as Elamites, Babylonians, Medes, Khuzis, Assyrians, Tunisians, Africans and Indians visited the court of Jamshid bearing gifts for the king and hoping to celebrate Nowruz at his court.  The rituals and traditions of Nowruz have undergone numerous changes throughout the ages, and reviewing these developments is beyond the scope of the present text.


The festival of Norouz represents a major part of the Iranian peoples’ rich culture and is one of the cornerstones of the eastern civilizations.

The origins of Norouz (New Day) are unknown, but references to it can be traced back to several thousand years predating the Achaemenid Dynasty (ca. 700 to 330 BC). The ancient Iranians marked the last ten days of the solar year in a solemn ceremony of mourning (‘Farvardgan’) to signify the end of life.  This was followed by the festival of Norouz that in contrast celebrated the rebirth of nature, signifying the rebirth of life and this was a great occasion for celebration and joy

The ancient Iranians marked the last ten days of the solar year in a solemn ceremony of mourning (‘Farvardgan’) to signify the end of life.  This was followed by the festival of Norouz that in contrast celebrated the rebirth of nature, signifying the rebirth of life and this was a great occasion for celebration and joy.
The details of Norouz ceremonies during the reign of the Achaemenid kings are not known, possibly because until the time of Alexander the Great foreigners were barred from attending these occasions.  However, there is no shortage of references to the rituals of celebrating the Norouz during and after the reign of the Sasanian Dynasty (226 – 652 AD).
One of the rock reliefs of the staircases in Persepolis depicts a procession of Median dignitaries on their way to the festival of Norouz, carrying ceremonial and symbolic offerings.
The basis of the rituals have remained remarkably intact for several thousand years, observed by vast populations living in Iran, Turkey, Iraq, Afghanistan and Central Asia, as well as ex-pat communities living through out the world.
The significant moment that starts the celebrations is when the earth goes through the spring equinox i.e. the exact moment when the earth has completed one revolution of the Sun, which is calculated with split second accuracy.
The Zoroastrians of ancient Persia celebrated the creation of life by offering their god, Ahura Mazda, seven trays filled with symbolic objects representing truth, justice, good thoughts, good deeds, virtue, prosperity, generosity and immortality.
Today, the tradition is continued through the setting of a special table or spread with an arrangement of specific symbolic items, seven of which have names that start with the Persian letter Seen (s).  These are:

I wanted to go to the lunch buffet at the Iranian restaurant today (I used to dance with the owner's daughter) but it's Friday. Well, if it doesn't hurt, it isn't penance! 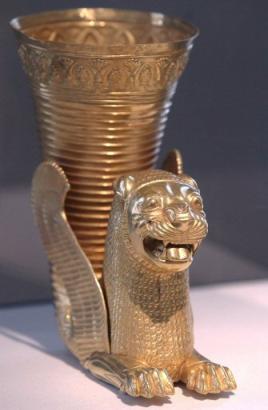 A golden lionshaped drinking container from 500-450 B.C. is displayed at the Basel, Switzerland Antiquities Museum, Feb. 12, 2003. The show '7,000 years of Persian Art' comprises chiefly loans from the Iranian National Museum in Tehran. (AP Photo/Keystone/Dominik Pluess)
9 posted on 03/21/2003 6:35:14 PM PST by freedom44
[ Post Reply | Private Reply | To 8 | View Replies]
To: freedom44
I guess I missed the advertisement. They probably had belly dancing, too!