The mother of one of five Britons being held in Camp X-Ray in Cuba has said her son is innocent and called for an end to his "unlawful imprisonment".

Zumrati Juma, whose son Feroz Abbasi is being held in the Guantanamo Bay camp, has called on the UK Government to persuade the US Government to hand him over to British authorities.

Louise Christian - solicitor for one of the accused - warned of possible legal action in Britain and the United States to ensure the mens' human rights were respected.

And legal organisations the Law Society and the Bar Council are backing calls for the men to be allowed access to lawyers.

US Defence Secretary Donald Rumsfeld has said he is willing to repatriate foreign nationals at the camp, including those from the UK, to face prosecution at home.

But he added that they would have to be available to further questioning from the US, should more evidence emerge.

The Home Office told BBC News Online that this was a matter for the American authorities until the UK was asked to intervene.

In her first public statement, Miss Juma said: "I am frightened that he is being badly treated and being kept in a cage without any exercise."

"To obtain legal rights for him I want him to be brought back to the UK but I don't think Mr Rumsfeld should be putting conditions on this."

Miss Juma said her son had disappeared a year ago but she had never stopped looking for him. 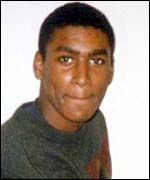 She believes the imprisonment of the detainees is unlawful.

Her solicitor Louise Christian added that the conditions they were being held in were an "absolute disgrace".

She said lawyers for the detainees would be lodging a petition in the US and were considering legal action in the UK.

The British Government could be held liable for aiding and abetting the US in the unlawful detentions on the basis of the interrogation by MI6 agents, she added.

Ms Christian said she wrote to the government on Friday threatening legal action if nothing had happened by the end of Tuesday.

The Law Society and Bar Council said their concern was that detainees were being denied their rights such as access to a lawyer.

The president of the Law Society, David McIntosh, told reporters he would be writing to Prime Minister Tony Blair on Monday urging him to take action in the US so that permission for access to lawyers is given immediately.

The two organisations said international law experts had concluded the prisoners, labelled "unlawful combatants", are entitled to these rights.

They also accused the US of breaching its international obligations by treating foreign-born suspects differently from the Americans.

Mr Abbasi, of Croydon, south London, sent a note to his mother saying he put his trust in Allah to keep his family healthy and well.

"I am fine and love you all very much. Please do not worry about me. Feroz," he wrote.

It was written on an official US military document marked "Prisoner of war mail".

Two other Britons, Asif Iqbal, 20, and Shafiq Rasul, 24, from Tipton, West Midlands, have also written home, it has been reported.

Miss Juma was joined at the Law Society in London by the father of another of the Britons being held.

Riasoth Ahmed said his son Ruhal, 20, had no connection with any militant Islamic organisation.

"I am anxious about the time it is taking for a decision to be made by the US as to the status that is to be afforded to my son," he said.

Mr Rumsfeld said on Sunday the US was open to another country receiving its nationals and prosecuting them.

But a Home Office spokeswoman said it was "a matter for the American authorities at the moment".

"If Mr Rumsfeld approaches us officially then obviously we take what steps we need," she added

The other Britons being held are Ruhal Ahmed, 20, all from Tipton, and web designer Jamal Udeen, 35, from Manchester.

We'll send him back so he can excersize his legal right to a proper burial.

And now she gets her knickers in a twist.

4 posted on 02/25/2002 2:51:03 PM PST by RippleFire
[ Post Reply | Private Reply | To 1 | View Replies]
To: knighthawk
Her solicitor Louise Christian added that the conditions they were being held in were an "absolute disgrace".

Can't we sue these people for libel?