Not too long ago a video emerged out of Afghanistan showing the country’s new rulers – the Taliban – parading a number of “suicide bombers” at an undisclosed location.

In the video, which was aired on Afghan National Television, masked men were seen carrying the Taliban flag and were referred to as “martyrdom-seekers squadron”.

The parade showcased everything from suicide vests, explosives, guns, rockets, mines, car bombs and yellow barrels. In the video, the Taliban claimed the weapons were to be used “against invaders and their puppets in defense of independence and dear country”.

They then went on to explain how the yellow barrels, car bombs, and suicide vests were used to “attack and destroy the enemy”.

This video summarizes how the subcontinent is sitting on a powder keg ever since the US military completed its withdrawal from Afghanistan on August 30, 2020.

As the democratically elected government fell overnight, with President Ashraf Ghani fleeing the country, it marked the start of uncertain times, not only for the people of Afghanistan but also for its neighbors, particularly India and Pakistan.

Parading of a “suicide squad” by the rulers of a country in the 21st century may seem dystopian, but now deputy governor of the Badakhshan province, Mullah Nisar Ahmad Ahmadi, gave official stamp on the development by telling Khaama Press that the suicide battalion has been deployed in his region, which borders Tajikistan and China.

"Disturbing display on State Radio Television of Taliban’s Arsenal of suicide vests, car bombs and road side bombs. Lethal weapons for Taliban but they did murder thousands of Afghan civilians including women and children across Afghanistan over the last 20 years." 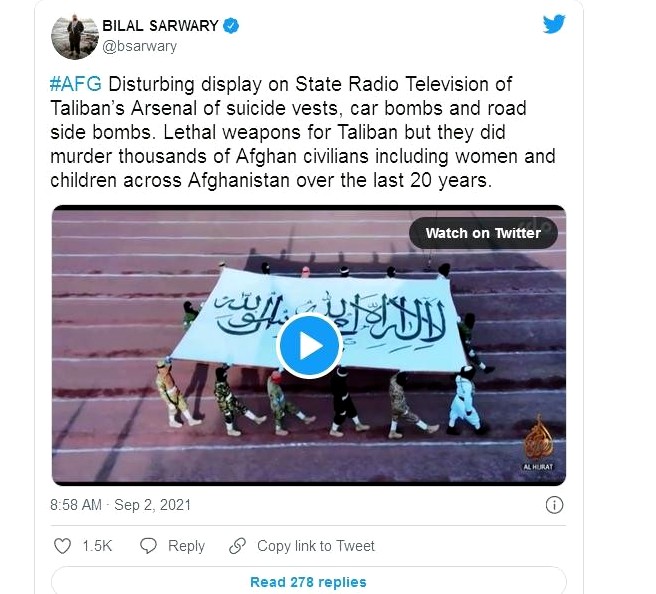 Fake story. The Tallibandy doesn’t have any weapons. Where in the world would they have gotten any weapons?

Brits too when they were a super power.

China will control Afghanistan through debt trapping. No need for military action.

China is finding a lot of countries aren’t paying their predatory loans.

China is in for a rude awakening if the think those ill gained properties will be secure in the terrorist filled countries they wish to occupy.

Get the belt. Hit the road.

This article is an absurdity. China barely touches Afghanistan at the very extremity of the Wakhan Corridor. And the Wakhan remains one of the least known and lightly populated places on earth.

Some of these folks will have to find new work.

Airborne drones will do the job at half the cost.....

The Chinese will have no rules of engagement or qualms about opening fire on ANYONE that even faintly resembles a suicide bomber...from a great distance.

I thought they invited the PRCs in to harvest their rare earth minerals?