Congressional Democrats and the Biden administration are working towards an ambitious goal of eliminating coal-fired electricity and 'decarbonize' the US electric grid by 2035.

To meet such an aggressive deadline, House Democrats unveiled a $150 billion 'clean electricity' program to incentivize utility companies to phase out fossil fuels for clean energy. The Clean Electricity Performance Program, or CEPP, would reward utility that boost their percentage of electricity supplied to the grid from green sources - such as solar, wind and hydro, between 2023 and 2030. 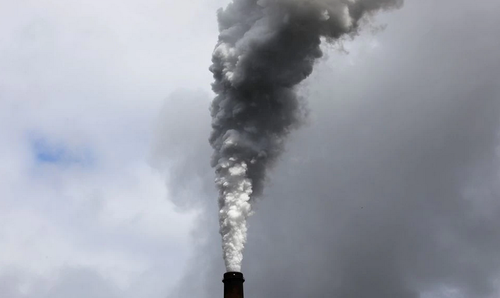 In short, Democrats are asking power companies to take a huge gamble on renewable energy - which would effectively 'kill' coal-fired electricity in the US.

"The CEPP would eliminate coal-fired electricity by 2030, if not sooner," according to a letter to House reps by Michelle Bloodworth, CEO of America's Power - which represents top miners, who added that the program would also "eliminate or at least drastically curtail the use of natural gas to generate electricity."

Biden's plans to decarbonize the power sector by 2035 is an enormous task, however according to America's Power, utilities are already making the switch - rushing headfirst into solar and wind projects which have inherent stability risks.

For example, there have been three significant grid issues this year involving renewables, the first in Texas, then California, and the UK. In Texas, a cold snap in early 2021 froze wind turbines and nearly crashed the entire power grid in the state. In California, wildfires strained the clean energy grid where state officials requested the federal government to relax air quality rules to burn natural gas turbines. And in the UK, wind power generation has dropped, straining the grid.

Not all Democrats agree

In a break from Democrats, Sen. Joe Manchin from the mining state of West Virginia mentioned last month that the coal industry "will be saved, has to be saved, because the country can't survive without it." He believes that there will eventually be "a transition" to other energy sources like atomic fusion, hydrogen gas, and nuclear power.

While coal generation has dropped by half over the past two decades, its use has sharply risen since the pandemic began - increasing from 15% to 23%. 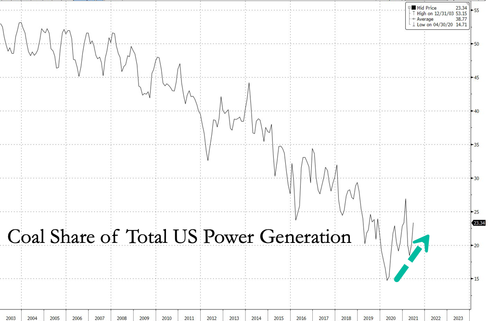 And while US progressives may be able to 'kill' coal in the West (at potentially great cost to grid stability), Asia is headed in the opposite direction.

Last month, TIME reported that China is planning to build 43 new coal-fired power plants and 18 new blast furnaces, despite the world's largest polluter pledging to bring its emissions to a peak before 2030, and achieve carbon neutrality by 2060.

China is leading the world in new coal power plants, building more than three times as much new coal power capacity as all other countries in the world combined in 2020. It isn’t alone in its reliance on coal, however. China and four other countries, India, Indonesia, Japan and Vietnam, account for more than 80% of the coal power stations planned across the world, according to a June report by the think-tank Carbon Tracker. -TIME

As FreightWaves' Greg Miller noted in July, bulk ships full of coal are headed to Asia.

"Turns out the news of the demise of coal has been greatly exaggerated," said Stifel analyst Ben Nolan in a new client note. "Despite an unseemly carbon footprint, coal demand is actually accelerating this year" across much of Asia.

In other words, China is leading a coal recovery by restarting dozens of shuttered coal mines to increase power demand, while other Asian nations are engaged in their own coal projects. 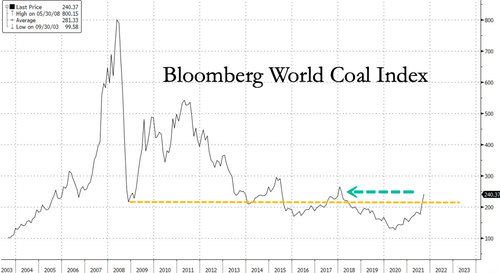 So as Democrats stage a dramatic 'kill the coal' campaign in the United States - an effort which will only be passed along to consumers (hurting low-income families the most), many other parts of the world, including China, Australia, South Africa, and South America, continue to use traditional energy sources as demand shows no signs of abating.

bubba got US off to a good start to kill “clean coal” in 1996 beginning with this:

PS: where is mochtar these days?

The Democrats are not interested in “killing coal” per se. What they are interested in is destroying the United States of America as a World Power. The fools who continue to elect, vote for, and support the Democrat Party and Democrats do not care. The Republican Party that aids and abets the Democrat Party in achieving its goal does not care. The vast majority of sheep don’t care. Even though it means their lives and the lives of their children.

We’re going to burn more coal so you need to speed up the purchase of Chinese-made solar panels.