Former President Donald Trump blasted the Biden administration's withdrawal from Afghanistan and speculated that China and Russia could already be reverse-engineering U.S. military equipment left behind.

Speaking with host Sharyl Attkisson during an interview that aired Sunday on "Full Measure," Trump excoriated the withdrawal as "incompetent" and warned it will likely endanger the United States and benefit its enemies.

Trump also expressed doubt regarding whether the war in Afghanistan is over, noting how many unvetted Afghan refugees are being resettled in the United States and around the world.

With all the traitors we have in the government/ military/defense companies, the Chicoms already have our secrets.

Of course they’re reverse-engineering it ... it was completely predictable as soon as the “brown blizzard” concluded.

Byedumb almost guaranteed it’ll be back and worse than before

The more advanced equipment should never have been given to the Afghan Army, even if they crushed the Taliban. They would always be able to sell critical pieces of equipment to anyone at anytime for any reason. 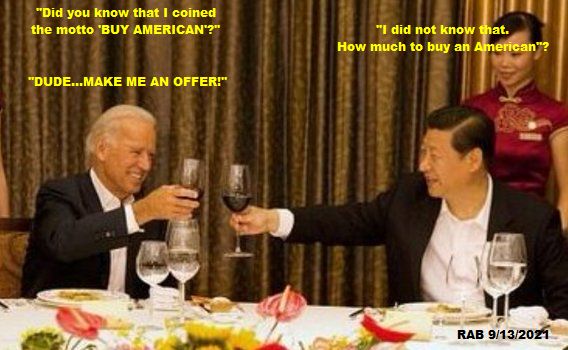 That meme could be an image of the free traitors on our side and would be just as, if not more, accurate.

9 posted on 09/13/2021 4:07:46 AM PDT by TwelveOfTwenty (Will whoever keeps asking if this country can get any more insane please stop?)
[ Post Reply | Private Reply | To 5 | View Replies]
To: American Number 181269513
Trump says Afghanistan withdrawal opens door to China, Russia reverse-engineering US military equipment