Clickbait title, right? 'Humberto and his family, who live just north of New Orleans, got hammered badly by Hurricane Ida. Trees are down all around Humberto’s house, no power, no AC-- so the poor guy’s losing it. I mean, he lost his house to Hurricane Katrina back in 2005, just as he was kicking off his book tour for what became the internationally-acclaimed BLOCKBUSTER "Fidel: Hollywood’s Favorite Tyrant!"  So now he’s stumbling around in a brain fog,  pouring and wiping sweat, cranking his chain-saw and probably swigging a (warm) brewskie while conjuring up clearly outrageous and barely coherent titles for his Townhall columns.'

Well, can’t blame you for the reaction above, amigos. So here, read some of The Washington Post's article yourselves. Note that the very title sets the amazing stage, (and don’t miss the part about how it’s all Trump’s fault!)

“When it Comes to Hurricanes the U.S. can learn a lot from Cuba: “As Hurricane Ida made landfall in Louisiana on Sunday, knocking power out to the entire city of New Orleans and beyond, many people nervously wondered, 'will Ida be another Katrina?' Unfortunately, the Federal Emergency Management Agency’s record since Katrina, particularly under the Trump administration, has not improved much.”

But AH! Now down in Stalinist Cuba:

“Hurricane Flora…prompted Fidel Castro to establish a civil defense system in 1966 that became a global model according to the United Nations….When the hurricane hit….Fidel Castro, his brother Raúl, his Argentine comrade-in-arms Ernesto “Che” Guevara and other revolutionary leaders personally put themselves in harm’s way to lead rescue and relief operations for those who could not escape. Seeking to combat the hurricane as if it were a human enemy, Castro wore a soldier’s helmet during rescue operations. He flew in an army helicopter that landed as close as possible to affected areas and then rode in — and sometimes even drove — amphibious vehicles to reach victims. In one harrowing moment, the overflowing La Rioja River nearly drowned him in his vehicle, but local peasants and soldiers rescued their leader just in time by attaching a tow cable to a tree to prevent his vehicle from sinking. One survivor of the hurricane recalled to me how Castro went “everywhere” to help victims while another remembered that medical care was readily available in hospitals for her children when she needed it right after the storm.”

“Almost drowned?” That’s highly contradictory, Washington Post. Given Castro’s manifold attributes as catalogued in your article, surely he could also walk on water.

At any rate, note how it’s all there, amigos. Yes, the diligent WaPo editorialist dutifully covered all the required bases, as taught in Communist Propaganda 101. The entire amazing—even by WaPo standards—article is linked here.

But perhaps we should provide a slightly wider angle view of the WaPo’s paragons of compassion and care-giving? Perhaps a little fleshing out of their Cuba-based Florence Nightingales is in order?

“Of course I knew the missiles were nuclear-armed,” responded Fidel Castro to Robert McNamara during a meeting in 1992. “That’s precisely why I urged Khrushchev to launch them. And of course Cuba would have been utterly destroyed in the exchange.”

“If the nuclear missiles had remained (in Cuba) we would have fired them against the heart of the U.S. including New York City.  To establish Socialism rivers of blood must flow. The victory of socialism is well worth millions of atomic victims!”

But there’s absolutely nothing new in The Washington Post’s propensity to parrot the KGB-founded-and-mentored Castro regime’s propaganda. After all, the WaPo’s former Latin American correspondent, and current immigration specialist Nick Miroff (not, astoundingly enough, the author of the hurricane article,) is married to a former educational apparatchik of the Castro regime named Camila Harnecker. She is the daughter of the founder of the Castro regime’s military intelligence (G-2) apparatus. This notorious KGB-protégé, Che Guevara-chum and Stalinist torturer was named Manuel “Barba Roja” (Red Beard) Pineiro.

In brief, the man who (had he not been offed by Castro in typical Stalinist fashion after his services expired) would have been the father–in-law of a star Washington Post reporter is the gentleman with the ZZ Top-type beard alongside his soulmate and fellow mass-torturer and murderer Che Guevara himself in this picture.

Significantly, at the time of its founding in 1959, Castro’s G-2 was under the close tutelage of Soviet GRU torturers who had interned with the masters themselves, Stalin and Beria.

For years, Manuel “Barba Roja” Pineiro served for the Castros exactly as Yezhov, Yagoda, and Beria served for Stalin–as director of mass-murder and torture.

And wouldn’t you know? Like so many others in such “sensitive” positions within Stalinist regimes (Yezhov, Yagoda, Beria– indeed, like Che Guevara himself), Manuel Pineiro’s usefulness to his employers finally expired. In 1998 the infamous “Barba Roja” himself got a taste of his own medicine and was “disappeared.” For the brain-dead, his Stalinist “comrades” concocted a story of a “car-accident."

Unsurprisingly, among the brain-dead we find former CIA officer who’d been stationed in Cuba during the revolution Robert Chapman, who denounces my books bitterly in The International Journal of Intelligence and Counterintelligence. For some crazy reason a person who finds my books highly offensive swallows every single propaganda missive from the Castro regime.

This would be hilarious in an inspector Clouseau sort of way—except that this person (CIA officer Chapman along with his colleagues) were paid very handsomely by U.S taxpayers to determine if the Castro brothers, Che Guevara and their merry band (who’d all been under KGB-tutelage since 1955) had any communist connections and might conceivably pose a threat to the U.S. upon gaining power.

Of course Chapman and his ultra-educated and highly-paid colleagues answered that question with a resounding “no.”

At any rate, a couple years ago The Washington Post ran an “in-depth” article (by none other than Nick Miroff) on an islet off the southwestern coast of Cuba called The Isle of Pines, which hosted the biggest prison/torture and forced-labor complex for political prisoners in the history of the Western world. Tens of thousands of American citizens of Cuban heritage had family members tortured there by Castro’s Stalinist regime. Many had family members murdered there.

Dozens of the surviving torture victims are U.S. citizens and live in the U.S. today. Interviews (or even mention) of these people would have sure added a relevant and eye-catching “human-interest” quotient to the “in-depth” article. After all, these people (most of whom would be immensely easy to contact) qualify as the longest-suffering political prisoners in modern history, having suffered prison camps, forced labor, and torture chambers for a period three times as long in Castro’s Gulag as Alexander Solzhenitsyn suffered in Stalin’s (8 years).

Alas! Except for the Cuban-American readers of the WaPo’s “in-depth” story by Nick Miroff, no reader would have guessed any of the above regarding this notorious prison torture-complex. Gosh. Wonder why?

Maybe because most of the victims were sent to Cuba’s Isle of Pines prison/torture/forced-labor complex on the orders of the man (Manuel “Barba Roja” Pineiro) who would have become father-in-law to the Washington Post’s Nick Miroff, the author of the story on the Isle of Pines, who married a one-time educational apparatchik of Cuba’s Stalinist and terror-sponsoring regime.

Why don’t all these limousine Marxists go live in Cuba, or Venezuela, or North Korea etc.?

Can AOC and her abuela be sent to Cuba to live in peace and abundance?

Fontova is a good guy! Hates the regimes of both Cuba and the US.

5 posted on 09/04/2021 4:32:05 AM PDT by outofsalt (If history teaches us anything, it's that history rarely teaches anything.)
[ Post Reply | Private Reply | To 3 | View Replies]
To: LIConFem
Methinks, Senior Fontova would welcome the chance to return to his homeland. The problem is, he would probably be killed as soon as he stepped ashore.
Humberto Fontova is currently the most prolific(Hell, maybe the only one left) anti-Castro, anti-communist writer left in the disUnited States.
I recommend your reading his regular column in TownHall.com. 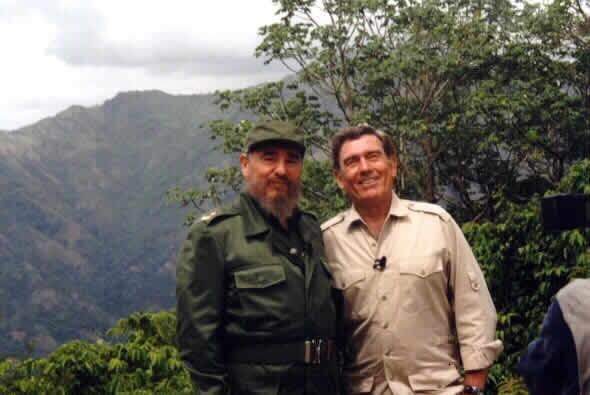 And the LEFT once again demonstrates why and how the term ‘ENEMEDIA’ has come into use! What a two-fer article at that, reminding us of the Katrina debacle (but not how the Louisiana City & State made it so) and then tying TRUMP to it before any real recovery gets to work.

Perhaps this article is a prophylactic defense if Biden’s assistance fumbles? You know; “Oh look, it was Trump’s fault for not funding FEMA”! WaPoop, the DNC’s local propaganda, claiming to be Pravda on the Potomac!

Fontova was born in 1954 in Havana, Cuba. Fontova's family went into exile to the United States (New Orleans) in 1961, when he was seven years old. Coinciding with their exodus, his father was held prisoner by the regime of Fidel Castro for three months after the Cuban Revolution, although he was later released. A short time later Fontova's cousin Pedro, whom he describes as a "fervent Catholic activist" who spoke out against the new regime, died while in Cuban state custody. The official cause of death given was a heart attack, although Fontova believes he was murdered by police interrogators. I agree though what you said about the Washington Compost crew. w

They love it so much they don’t want to leave

The only way that headline is true is if you consider mass murder “helping”.

of course the Democrats do nothing but complain about Global Warming and having to spend tons of money to change the weather ,LOL

I remember a hurricane in Cuba quite a few years ago. The press glorified the Cuban response to it with a photo of a man walking down a road.
On his head he had a palm leaf to keep off the rain. No shoes, no raincoat.

I thought...Forty years after the US Revolution, using Adam Smith’s THE WEALTH OF NATIONS, the US was becoming an economic powerhouse.

Forty years after the Cuban “Revo-loo-cion” they still could not make Marxism work.