As part of MTV’s ongoing celebration of their 40th anniversary, the network has revealed its new-look Moon Person trophy.

Artist Kehinde Wiley — whose presidential portrait of Barack Obama resides in the Smithsonian’s National Portrait Gallery — is the creator of this iconic statuette that the winners will receive at this year’s MTV Video Music Awards.

Ahead of the September 12th award show, Rolling Stone has the exclusive first look at the new Moon Person trophy:

“Kehinde Wiley’s Moon Person sculpture represents inclusivity and diversity marked by the historical, environmental and nature relevance of the botanicals,” MTV said of the design.

“The design features botanical vines seamlessly flowing up and around the figure’s legs, body, and arms as a commentary on the ethnic histories that surround America. Each intertwined vine or leaf has a different historical relevance, such as the seeds from African slaves, that are woven into the American tapestry. The sculpture complements Wiley’s forthcoming series of portraits, in which he plans to create paintings featuring his subjects lying on their sides as vines encircle their bodies.”

The redesign is by Kehinde Wiley who did Obamas' portrait. Can you spot the sperm and the penis? 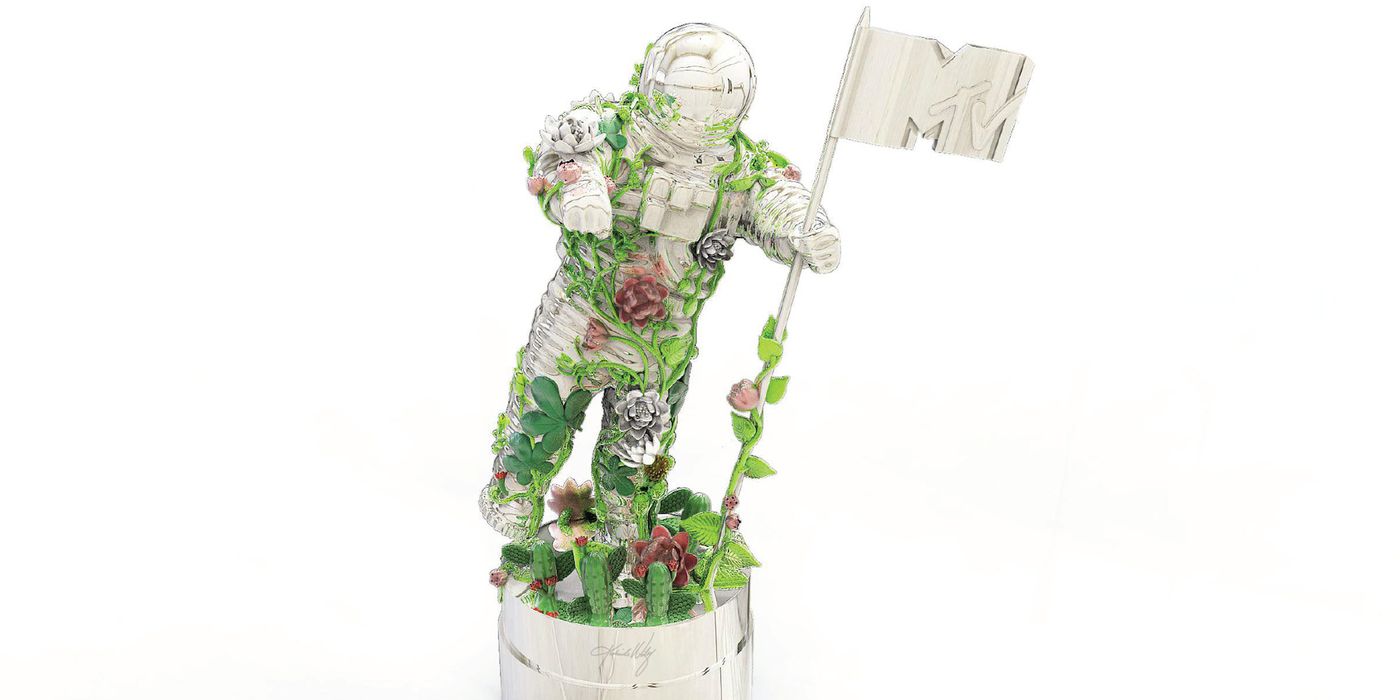 MTV?
That channel that USED to actually play music?

Never heard of them.

Absolutely HIDEOUS. Just like the weirdo Odungo portrait. Someone should tell this horrible artist (they stink!) not to down a potful of drugs before going into their studio.

Reminds me of ancient Mayan ruins, once a proud and powerful empire, long since abandoned, their language forgotten, and now nature is reclaiming the space they once dominated. All that is left are vine-covered artifacts.

A leftist salute to how MTV and others destroyed western civilization. Gaia is now free to take over since those eeeevil capitalists are gone.

Society does not celebrate fun guys.

It does look like preparation for the end of society, after it disappeared 300 years ago, like in a Charleston Heston movie.

Looks like “The Mummy” (Karloff) in a space-suit with a green fungus on him.

Or maybe it is actually a salute to the original “Blob” when it attacked the man’s arm.

Or perhaps it is just plain crap.

Martha Quinn was a cutie but I digress

12 posted on 08/02/2021 3:36:02 AM PDT by Lib-Lickers 2
[ Post Reply | Private Reply | To 1 | View Replies]
To: yesthatjallen
“Kehinde Wiley’s Moon Person sculpture represents inclusivity and diversity marked by the historical, environmental and nature relevance of the botanicals,” MTV said of the design.

If MTV is doing it and Kehinde Wiley is a part of it you know it's gonna suck. This statement just confirms that.

A man who was aware of the times and what was coming.