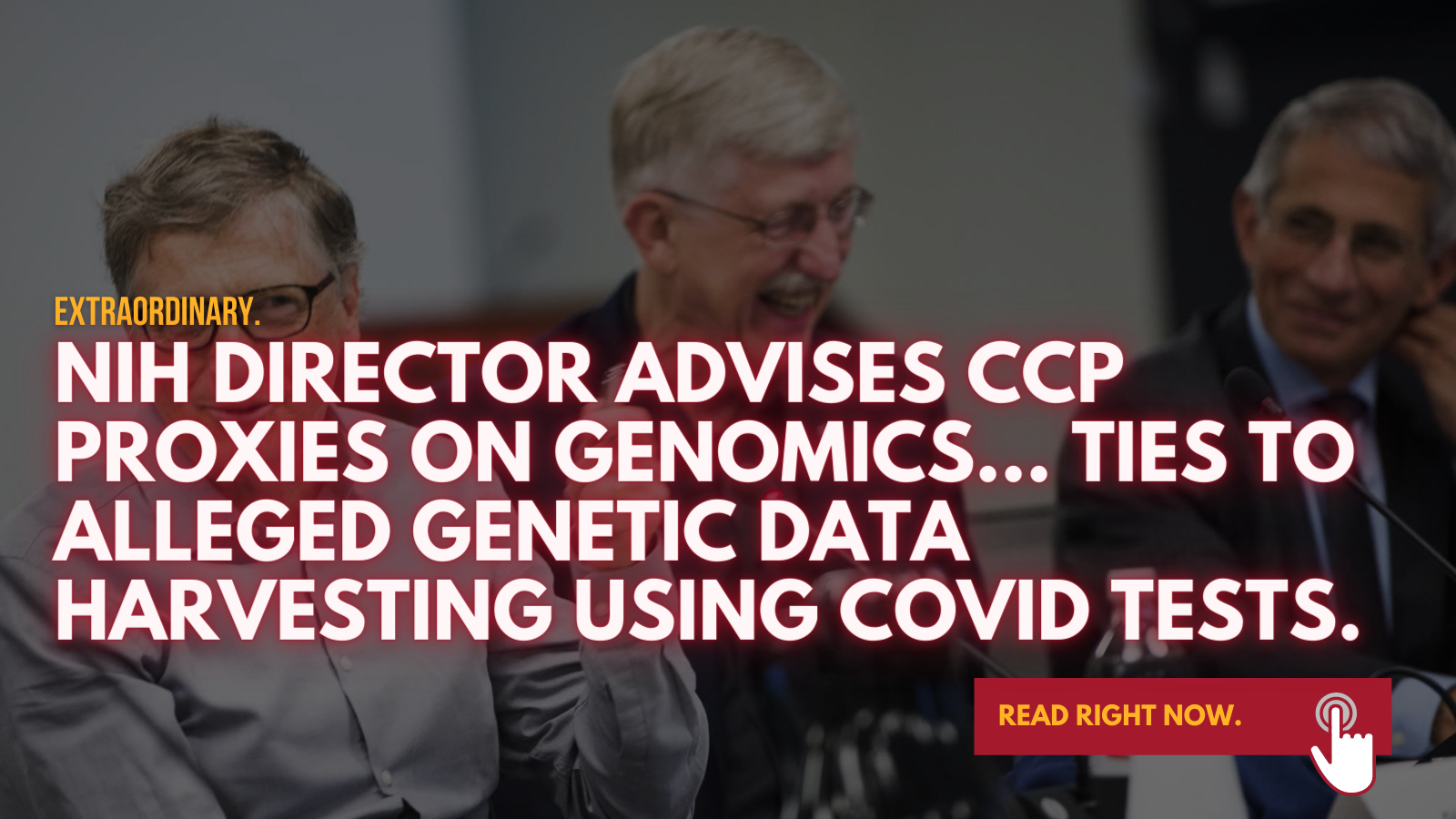 National Institutes of Health director Dr. Francis Collins serves on the advisory board of a conference sponsored by a Chinese military-linked genomics firm, The National Pulse can reveal. The D.C.-based, health industry big-wig and boss to Anthony Fauci has even referred to the controversial company’s founder as a “friend”.

The annual event in question – the International Conference on Genomics – is organized by BGI Genomics and the China National GeneBank.

BGI Genomics has been flagged by U.S. intelligence officials for its robust efforts to “collect, store and exploit biometric information” on American citizens through COVID-19 test kits. According to the Federal Bureau of Investigation (FBI), the firm has deep ties to both the Chinese Communist Party and its military.

“BGI comes to the U.S. bearing gifts, but harboring other motives. It’s unclear whether BGI, or any COVID tester, would get DNA from nasal swabs, he says, but the labs are a way to establish a foothold, to bring their equipment here, start mining your data, and set up shop in your neighborhood,” the report claims.

That the group is linked with the head of the U.S. National Institutes of Health should raise immediate alarms. Gene Storage.

BGI also manages the conference’s other sponsor, China National GeneBank, which describes itself as a gene storage project that’s “approved and funded by the Chinese government.”

Several BGI consultants, managers, and researchers in addition to professors at Chinese Communist Party-run universities speak at the conference and have done since its 2006 founding, which Collins attended and spoke at. MUST READ: Biden's UN Adviser Met With Group 'Co-Opting' Americans To Push CCP's 'Preferred Policies'.

Collins is also listed as a member of the conference’s Advisory Board and addressed the conference during his tenure as National Institutes of Health (NIH) Director in 2016.

“I send hearty greetings from the United States,” Collins begins his virtual speech for the event, before praising the event as an “important, highly relevant scientific gathering” and the Director, Co-founder, and Chairman of BGI Genomics Yang Huanming as a “friend.” Collins listed on the BGI advisory board.

Yang, however, has authored studies funded by China’s People’s Liberation Army (PLA), according to Reuters:

“One science paper authored by BGI founders Yang Huanming and Wang Jian along with the PLA’s Key Laboratory of High Altitude Medicine and the Third Military Medical University focused on experiments with the brains of monkeys suffering altitude sickness. The study, published in January 2020, stated that it was funded as one of the “key projects of military science and technology” by the PLA. A decade ago, the military university’s research sought to identify genes related to altitude sickness so the PLA could screen for susceptible soldiers. The latest research focused on how drugs interacting with genes could potentially protect a person from brain injury.”

Throughout the speech, Collins implore attendees to pursue international scientific collaboration, celebrating that the “attitude of needed by all, owned by all, done by all, shared by all, continues to this very day not only in genomic research but in many other areas of science that have adopted that same message.”

“What are you doing to reinforce and expand upon the spirit of collaboration in “omics” research and all others,” he inquires before asking attendees to “enhance data access and opportunities for sharing across the globe.”

Collins also praised BGI during a 2011 interview while speaking on a panel with fellow former directors of NIH’s National Human Genome Research Institute. He lauded BGI as an “amazing center with amazing talent,” adding he didn’t regard the “remarkable” Chinese military-linked firm’s success as a “threatening outcome”:

“But, was that a threatening thing? It was to some people, I suppose. And it certainly was a surprise to people who thought that the U.S. would remain dominant for centuries to come. It wasn’t that hard with energy and some funds for BGI to jump out there and create an amazing center with amazing talent. Again, I never felt like that was such a threatening outcome as long as they’re playing fair.”

The news comes as an embattled Anthony Fauci takes to the airwaves on a daily basis to attempt to distance himself from the allegations that his National Institutes of Allergy and Infectious Disease (NIAID) funded gain-of-function research at the Wuhan Institute of Virology. The National Pulse’s reporting on gain-of-function, proving Fauci’s involvement, can be all found here.

Francis Collins is a regular guest on Fox News, where he often appears on shows hosted by anti-Trump anchors such as Neil Cavuto.

China owns the fedgov. Infiltration,honey traps, bribery, blackmail. They are smart and patient, and have been at it for many years.

Individual States are all we have now.

This, plus beijingbiden ordering fed employees and fed contractor employees to get the shots or get tested :

means that China will have DNA info on all who refuse to get the shots.

The Chinese communists also are collecting a gigantic genetic database on their domestic population, especially those who pose security challenges to their regime, like Uighurs and Tibetans.

they’re coming for your kidneys!

The Chinese communists also are collecting a gigantic genetic database on their domestic population, especially those who pose security challenges to their regime, like Uighurs and Tibetans.

did chinese interests buy ancestry.com to capture their DNA service???

I had not that heard that Chinese interests had purchased Ancestry.com, but it would fit a pattern of collecting that information, as well as generally being a technology that is an intelligence collection priority of the ChiComs.

another point of interest to me is chinese interest purchased about 130,000 acres in val verde county tx.

the curious thing about the purchase (to me) is that this property is in close proximity to a rare earth metals mining operation ($TMRC) Texas Mineral Resources Co. based near Sierra Bianca, TX.

any idea what’s going on down there?