Ted Cruz Calls on Senate Colleagues to Oppose Biden's DHS Nominee: "He has shown a repeated disregard for the rule of law."
NewsMax ^ | 01/29/2021 | Theodore Bunker

Sen. Ted Cruz, R-Texas, on Friday released a letter that he sent to his colleagues in the Senate urging them to oppose the nomination of Alejandro Mayorkas as Secretary of the Department of Homeland Security, saying he “has shown a repeated disregard for the rule of law.”

Cruz claims that Mayorkas, the former deputy secretary of DHS who also served as Director of U.S. Citizenship and Immigration Services, committed “a long list of ethical, legal, and policy failures,” during his career, including “abuses of power that provided special government favors to benefit well-connected Democrats, such as securing an EB-5 visa for a high-level official at Huawei, a global espionage operation of the Chinese Communist Party masquerading as a technology company.”

The senator cited a 2015 inspector general’s report on Mayorkas, which he says “brought to light his improper actions as the Director of USCIS.”

The report concerns the then-director’s intervention in the EB-5 visa program and any possible link with wealthy investors, and concluded that while Mayorkas did not break any laws he did create the appearance of “special access,” according to The Washington Post.

“Mayorkas overrode normal process in order to provide political favors under the EB-5 visa program to well-connected Democrat stakeholders — including a company run by former Secretary of State Hillary Clinton’s brother that sought a visa for a vice president of Huawei Technologies and a company in which Senator Harry Reid’s son was involved,” Cruz writes.

“Mr. Mayorkas’s improper intervention was the deciding factor in granting visas to politically favored companies and people, and led to ‘significant resentment’ among not only career staff but ‘senior managers and attorneys responsible for USCIS mission and programs.’ As the Inspector General bluntly put it, Mr. Mayorkas’s intervention was ‘corrosive and destabilizing,’” he continued. 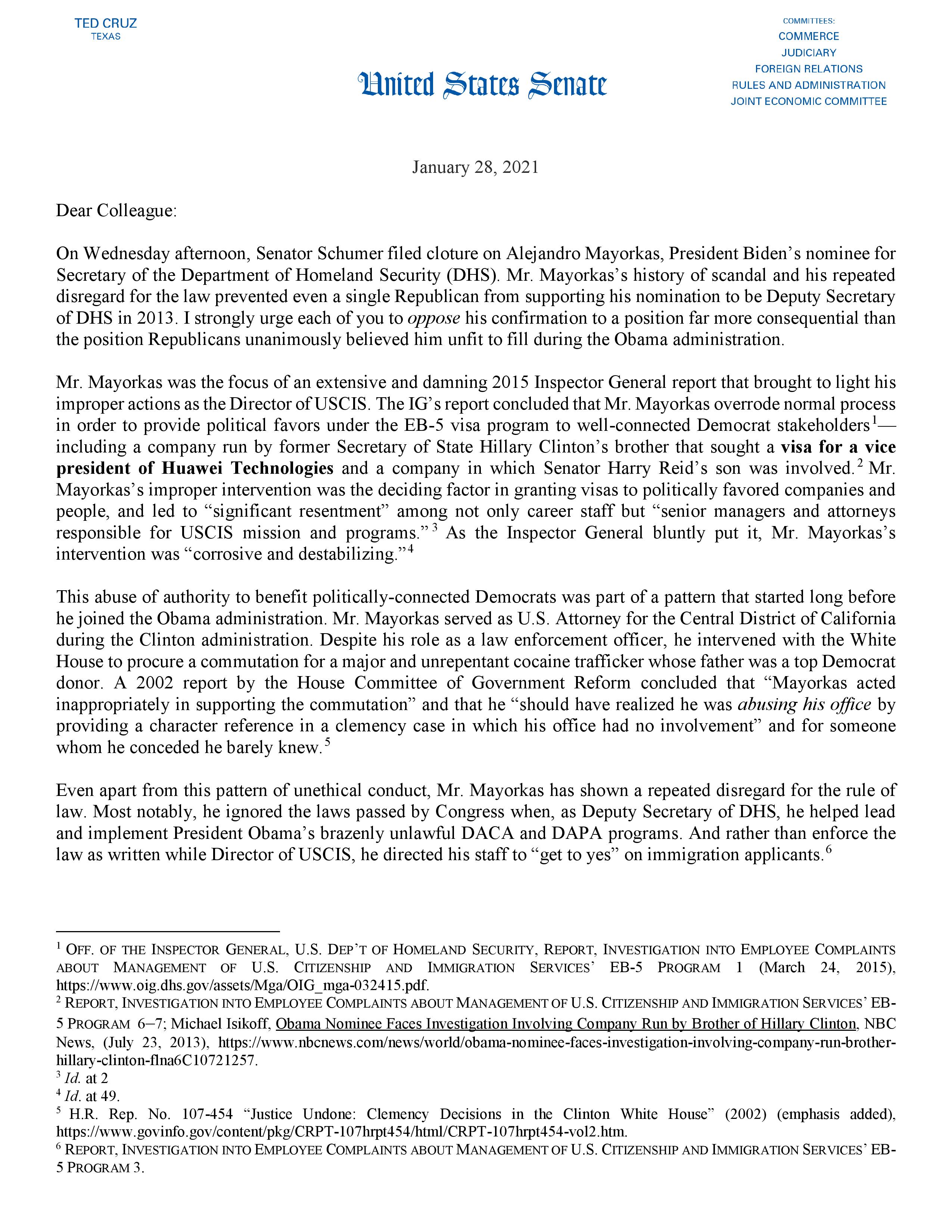 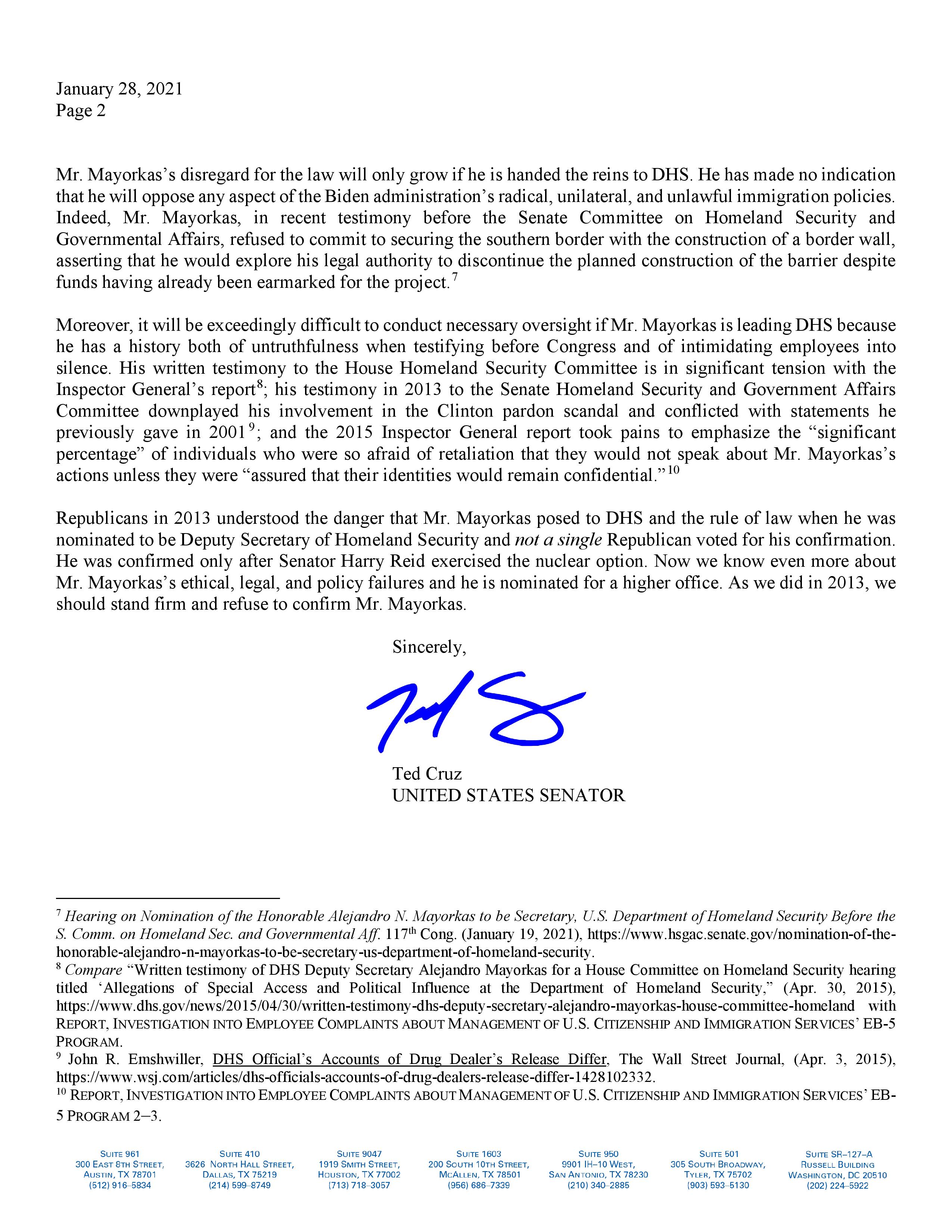 Who? Xiden or his corrupt and odious nominee?

Dick Morris: Criminal Chinese Company Had Strong Links to Clintons
12/11/2018, 12:16:33 AM · by bitt · 52 replies
westernjournal.com ^ | 12/10/2018 | morris
When the chief financial officer of Huawei Technologies, Meng Wanzhou, was arrested in Canada on Dec. 1 through an extradition warrant from the U.S., American media described, in detail, how the company had conspired to evade U.S. sanctions on Iran Huawei has long been involved in helping terrorist states and seeking to thwart U.S. sanctions. Meng is the daughter of Huawei’s founder, Ren Zhengfei. As details of Huawei’s complicity with Iran emerge, it is time to look back on the Clinton family and its close relationship with Huawei. When their connection was first exposed more than a decade ago, it...

China Vows ‘Severe Consequences’ If Huawei Official Is Not Released
12/8/2018, 11:07:29 PM · by familyop · 46 replies
The Wall Street Journal ^ | December 8, 2018 | Eva Dou
Meng Wanzhou is being held in Canada at U.S. request to be extradited, face allegations she violated sanctions on dealing with Iran BEIJING—China issued an ultimatum to Canada, demanding the immediate release of Huawei Technologies Co.’s finance chief or face unspecified “severe consequences.” Chinese Vice Foreign Minister Le Yucheng summoned Canada’s ambassador to Beijing, John McCallum, on Saturday to deliver the warning, according to a statement from the Chinese Foreign Ministry.

This is a must-read.

Didn’t they already approve this guy with the help of the RINO contingent.

Not Yet. But it will get there.

Democrats never break the law. They either ignore it, rewrite or reinterpret it.

I want to move to a new planet. I was driving home this evening in my ultra-conservative city and out of the corner of my eye, I saw one of those electronic billboards that was saying “Cruz Resign.” I think I will go count my bullets again.

RE: I was driving home this evening in my ultra-conservative city and out of the corner of my eye, I saw one of those electronic billboards that was saying “Cruz Resign.”

OK, either the one who put up the billboard is a liberal in your conservative city or has somebody better than Cruz in mind. Who do you think that person who would replace Cruz should be? Texas already had Beto, who tried once.

EVERY republican senator should be shouting this to the rooftops.

I am all for term limits so I would be glad to see someone other than Cruz. Cornyn is a a loser. I hold my nose when I vote for him. What bothers me is that someone spent money to flash that ad in a town that Louie Gohmert represents. And we are not even in an election cycle.

My short take on the article; Biden wants to install a ChiCom spy master as head of DHS.

This police state stuff is moving at a rapid pace now.

Of course the Libs want Ted Cruz to resign. He’s just about the only guy on our side who is doing ANYTHING to counter them.

Thanks Ted, but the ENTIRE GOP has also shown a complete disregard for the law - November 3 through January 20...