Vice President Mike Pence said that he refuses to invoke the 25th Amendment to remove President Donald Trump from office, saying that it would set a “terrible precedent.”

In a letter to House Speaker Nancy Pelosi (D-Calif.), Pence said that he does not believe that invoking the 25th Amendment is in the best interest of the nation or consistent with the Constitution.

“[W]ith just eight days left in the President’s term, you and the Democratic Caucus are demanding that the Cabinet and I invoke the 25th Amendment,” he wrote. “I do not believe that such a course of action is in the best interest of our Nation or consistent with our Constitution.”

“Last week, I did not yield to pressure to exert power beyond my constitutional authority to determine the outcome of the election, and I will not now yield to efforts in the House of Representatives to play political games at a time so serious in the life of our Nation.”

Pence said that the Trump Administration’s energy is now “directed to ensuring an orderly transition.”

“In the midst of a global pandemic, economic hardship for millions of Americans, and the tragic events of January 6th, now is the time for us to come together, now is the time to heal,” he wrote.

“I urge you and every member of Congress to avoid actions that would further divide and inflame the passions of the moment,” he added. “Work with us to lower the temperature and unite our country as we prepare to inaugurate President-elect Joe Biden as the next President of the United States.”

He concluded, “I pledge to you that I will continue to do my part to work in good faith with the incoming administration to ensure an orderly transition of power. So help me God.”

A Trump administration official close to Pence who chose to remain anonymous previously told The Epoch Times that there is no possibility of Pence invoking the 25th.

On Jan. 7, Pelosi said that Congress may move to impeach Trump if Pence and Trump’s cabinet do not take action. At the time, she said that Trump “clearly has indicated that over and over again,” including by allegedly “inciting sedition,” referring to the civil unrest that took place on U.S. Capitol grounds on Jan. 6.

Trump has been repeatedly calling for peace and condemned the violence that took place at and near the U.S. Capitol on Jan. 6, when a group of protestors breached the Capitol as lawmakers gathered in the building to count and certify electoral votes for the now-president-elect Joe Biden.

Pelosi and Senate Minority Leader Chuck Schumer (D-N.Y.) have both accused Trump of having incited the violence, and both have called for his removal from office.

The Jan. 6 breach of the Capitol building interrupted the lawmakers for several hours before proceedings resumed. One woman, Air Force veteran Ashli Babbitt, died that day after being shot by Capitol police inside the building.

It is unclear who instigated the breach of the building. A video of the event shows a left-wing activist encouraging and convincing Capitol police to let trespassers through at several points.

Separately, the civil unrest that broke out on Capitol grounds left at least four more people dead—three due to medical reasons, and a U.S. Capitol police officer was confirmed dead by the department on Jan. 7, due to injuries sustained while on duty responding to riots. 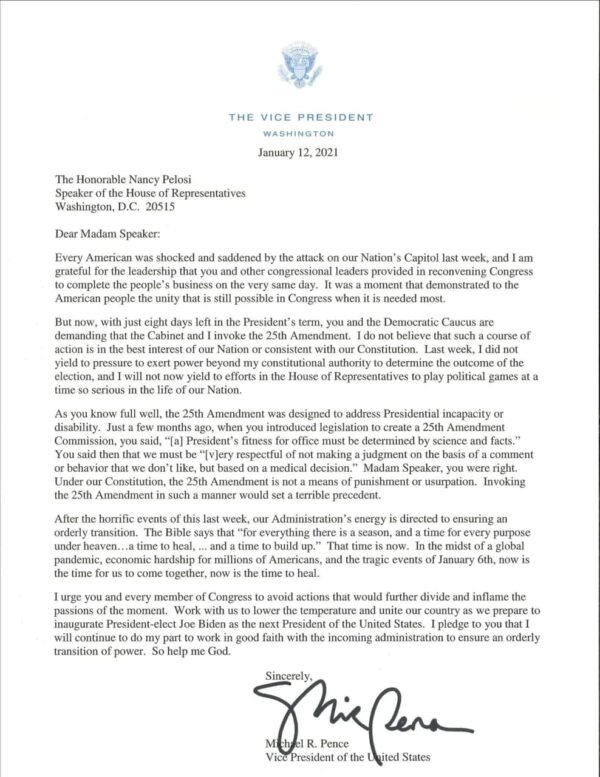 So, he’s not against it. He just doesn’t want to set a bad precedent.

I wonder if the Republicans will invoke the 25th Amendment to remove Biden from office.

“I will not now yield to efforts in the House of Representatives to play political games at a time so serious in the life of our Nation.”

So NOW he’s concerned about the life of our nation.

Wow. If that’s a real letter then this guy is definitely the ‘Deep Throat’ of the entire 4 years of the Trump presidency. He never refutes the actions or the premise of such an outlandish proposition. All he says it’s not “in the best interests of the nation”.

Pence will go down in history as the spineless fool who wrecked the country.

“Vice President Mike Pence said that he refuses to invoke the 25th Amendment to remove President Donald Trump from office, saying that it would set a “terrible precedent.””

Precedent? Who cares about precedent. That is not the reason. Nor does it matter than he only has days left to serve.

If a President WAS truly incapacitated the 25th amendment should be used. However the whole thing is a joke and an insult in the context of President Trump.

All that to be said in the letter was “Are you nuts?”

This entire America and liberty ending scenario is on Pence.

The dudette is the worst of traitors.

People like the pence will not be touched by the gas chambers and guillotine’s the left will in time push for, enabled me ow by the pence.

Oh well, what’s the law to a guy who single handedly veto’s his own Indiana legislative majorities, in order to enable and enforce the entire LGBTQ agenda, including abortion.

Go for the backing of the anti-abortion crowd, then back the crazed, no moral bound sex crowd (often with a thousand partners or more), who have driven the abortion industry from the beginning.

But hey, it ain’t for real until we frame and throw a 3 star patriot in jail, and muzzle him, for 4 years, so no one can learn any truth.

Pence was the Jeff Sessions/Bill Barr of Vice Presidents

VP Mike Pence Ignored a Letter from Republicans In Wisconsin’s Congress In December Contesting the Results: Here is the Letter...

RE: VP Mike Pence Ignored a Letter from Republicans In Wisconsin’s Congress In December Contesting the Results: Here is the Letter...

Here is the question I have for these Wisconsin legislators:

1) Who has the the authority BY LAW to choose Wisconsin’s electors?

My understanding is it is the job of the LEGISLATURE

2) If so, how the heck did Wisconsin choose electors for Joe Biden when the results are in doubt? I think the legislators did not follow the constitution and ABDICATED their job to a committee and the governor.

3) What the heck was the REPUBLICAN CONTROLLED legislature doing when the wrong electors were being chosen? Why did no one object?

Then they have the temerity to write Pence a letter at the very last minute to ask him to remedy things for them?

thanks for pointign that out, i didn ‘t notice the date-

“I wonder if the Republicans will invoke the 25th Amendment to remove Biden from office.”

OMG I hope not. That means mattress back would be president