To hear leftists on cable news tell it, there’s a Russian behind every bush and tree. They hear everything you say, and see more of you than New Yorker magazine staff members saw of Jeffrey Toobin. In fact, the Russian disinformation plotters are more omniscient than Santa Claus. You’d be insane to deny them their will, they’re that good…or so liberals believe.

Democrats have tried a lot of campaign strategies this election season – you’re a racist, now vote for me; the country sucks, let us run it; you don’t know how bad you have it; etc., etc. – but at the end they’ve settled on an old favorite: RUSSIA!

They’ve been playing this game throughout the Trump administration – Donald Trump has been everything from a Russian puppet to a Russian agent, depending on the day of the week. He was horrible at both, sending actual military assistance to Ukraine in the form of weapons, not just MREs and pillows. If you’re doing the bidding of a dictator you don’t aid a country that dictator has invaded with heavy weaponry.

The narrative that President Trump was in league with Putin didn’t stand up to scrutiny, so now the left is trying a different approach with an old familiar ring: Russia is interfering in the election again.

Last time it was through a few thousand dollars in Facebook ads. I said at the time, if Russia can change an election with a few grand on absurd social media posts we should ask them to look at everything our government does, because that level of efficiency is amazing. This time, it’s through a strategy that would make a James Bond villain envious.

If we’re to believe what the Morning Joe-set is trying to sell, Russian operatives filled a laptop with pictures of Hunter Biden, including at least one of him unconscious with a crack pipe in his mouth, and a string of shady, if not incriminating, emails. They then sent that laptop to a computer repair shop more than a year and a half ago and left it on the off chance that Joe would not only enter the race for the Democrat nomination (it was dropped off a week before Joe announced), but that he would beat the other 700 Democrats in the field. If, in the event that he did all that, they could then unleash all that manufactured data on the public, but only after the computer was in the hands of the FBI for 10 months. Oh, and they got the people on those shady, if not incriminating, email threads to vouch for their authenticity. On top of all that, they also somehow convinced Joe, Hunter, and the entire Biden campaign to refuse to deny all of it was real.

That’s one hell of a plan. If the Russians can pull that off, we’d be crazy to cross them. Maybe they also trained Toobin in how to use Zoom? There’s nothing they can’t do!

Theoretically, if the Russians did all that because they wanted to help Donald Trump, they would have done something similar for all the viable candidates, right? Just in case, I mean. Where is the rest of it? Where’s the plot against Pete Buttigieg? Seems like the set-up for Kamala Harris would be relevant, doesn’t it? Why waste it? Hit the campaign with a two-for.

Of course, everyone espousing the idea that Hunter’s laptop “reeks of Russian disinformation” knows they’re lying, they just don’t care. Who’s going to call them on it? Certainly no one they work with. On the contrary, if they want their contracts renewed, a shot at a job in a Biden administration, or even access to one they know they’d better toe the line. Not that it’s a tough choice for them, they’re on the team.

Maybe they think people will forget, that credibility and public trust will return to them once they stop spitting in our faces while telling us it’s raining?

More likely is that they just don’t care. Their audiences are what they are; after lying to them for 3 years about collusion, they stuck around. There’s literally nothing they can do to lose the audience they have left and that’s enough. They’ll make their millions, get good seats at restaurants in Manhattan (at least the ones that survive De Blasio and Cuomo), and will be the toasts of their social circles, so what do they care?

Jeffrey Toobin’s wife knows what her husband is – he’s fathered a child outside their marriage and has a history of, um, less that faithful actions (actually, quite scummy) – and she’s still around. Liberal media consumers are kind of like that – they don’t care what the people filling them with lies do or say, as long as they’re there when they turn on the TV, filling them with comfort food, and making them feel superior to everyone not as “enlightened” as they are.

Most importantly, these lying elites are protecting them from the Russians plotting against them…as wealthy Russian politicians and oligarchs suffer under sanctions imposed on them by their puppet/agent, Donald Trump.

These people are morons. (The Russians made me write that.)

TOPICS: Culture/Society; Editorial; Politics/Elections
KEYWORDS: disinformation; hunterbiden; joebiden; russians
1 posted on 10/22/2020 5:08:58 AM PDT by Kaslin
[ Post Reply | Private Reply | View Replies]
To: Kaslin
Throw out who likes who. Instead just look at the parties' policies and how they affect Russia. The one change in US policy that would have Putin doing a Cossack dance in the halls of the Kremlin would be restrictions or elimination of US oil and gas drilling. That would increase world fuel prices to Russia's benefit and make sure that Western Europe remains dependent on Russian natural gas. Russia's fortunes (and thise of Putin's oligarch friends) and power would increase.

Now which party is planning on restricting drilling and eliminate fracking? That's the one Russia wants to win. Anything else is just to promote chaos and division in us.

I think the absolute best result for Russia in 2016 would have been Trump winning the popular vote but Hillary winning in the Electoral College. That would have split the voters but put Hillary, who was already in Russia's payroll from the Uranium One deal and Bill's speaking fees, in charge of limiting our fuel production.

Wow... That’s a plot line that is probably not only too convoluted and apparently prescient for a Bond villain... Probably wouldn’t cut the mustard even for Dr. Evil in the Austin Powers series of movies...

The Devil made me buy this dress! - Flip Wilson 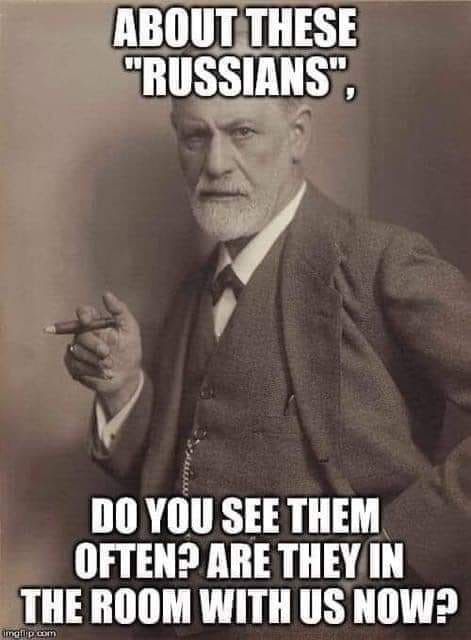