Reports from the Honduras-Guatemala border shows large groups of migrants illegally pushing past security personnel. Despite the threat of COVID-19, the migrants forced their way across the border.

McDonald reported that Guatemalan border officials expect an additional 3,000 to attempt to enter from Honduras on Friday, raising the total two-day crossing to an estimated 6,000 migrants...

The article states the odds of the caravan reaching the U.S. border is small due to increased immigration enforcement in Guatemala and Mexico following negotiations with the Trump administration earlier this year. As part of that negotiation, Mexico created a National Guard for the specific purpose of enforcing its southern border with Guatemala.

“The migrants who arrived at the Guatemala border on Thursday had set out walking the previous night from San Pedro Sula, and many wore masks,” The Guardian article reports. “They appeared to be mostly young men, though there were the occasional small children being pushed in strollers.”

TOPICS: Foreign Affairs; Government; Mexico; Politics/Elections
KEYWORDS: aliens; caravan; guatemala; immigration; invasion Navigation: use the links below to view more comments.
first 1-20, 21-26 next last
Let me guess - some Leftist organization whipped this up to influence the US election. It is the first caravan attempt in many months.

My guess is that Mexico will crack down on them at their Southern Border - if Guatemala doesn't get them first.

Just in time for an election border crisis. What a coinkydink, eh?

China and soros along with our corporate elites are behind this!! Our swamp government are useless to investigate who is sponsoring this crap!! They are damn busy hoaxing stupid Americans!!!

“They appeared to be mostly young men”

Poverty and shitho1e country origin does not entitle anyone to enter the UnitedStates !

The writer says, “presumably” they are heading for our Southern Border,,,,what rock is this clown living under?
Did he think they were heading for Chihuahua City for Snow Skiing for the winter? Over 60% of them will have the Covirus....

So glad Trump is president. Otherwise tens of thousands would have been crashing through the entry points of our country while telling us, eff your borders and laws...

Guatemala being constantly involved in messing with the US through refugee crisis shouldn’t really surprise anyone.

From the 60’s through 80’s, Guat had already been known as one of several Soviet Politburo/Kremlin vacation and warm climate medical recovery enclaves.

Then, in 1991, most members of the Soviet Politburo and many military brass became the Russian Parliament, the Soviet Union became the CIS (Commonwealth of Independent States), excluding Estonia, Latvia, and Lithuania.

CIS Headquarters has since remained between Moscow and St. Petersburg.

But as with other “Latin American” nations, Moscow’s influence grew even stronger and dynamic in Guatemala than it had been during the “formal cold war”.

From the 90’s to the present, as with Nicaragua and Venezuela, Moscow’s influence in Guatemala has become vastly more militaristic, formal, and organized. GRU and FSB (KGB) nearly dominate Guatemala, even while yet somewhat quiet.

In the past 15 months, (twice), Putin has overtly threatened to trigger “Syrian style” and “Latin American style” mass refugee crisis into Southern Europe (Italy and France), through Libya/Tripoli, IF the EU and NATO didn’t sign off on Libya, Tripoli, Egypt, and the Eastern Med.

GRU and FSB activity permeates Guatemala (and others).

As with Ukraine, chaos and targeted corruption are used to weaken and neutralize governments, and to manipulate a specific outcome.

Refugee organization also creates pressure on other smaller nations across the Western Hemisphere.

This is very much the M.O.

All of that does not exclude US based leftist orgs, agencies, NGO’s, and billionaire’s from taking part in a big way.

The Venezuelan Government/Intelligence Services were implicated in organizing some of the illegal immigrant caravans last year, through Leftist front groups.

Where’s that Aww jeez, not that sh!t again! meme?

I don’t think they are going to get very far.

Mexico is powerfully incentivized to stop them, in a grand deal that includes the new USMCA trade deal.

We are going to rip our supply chain out of China, and Mexico can have a huge chunk of the business - if they play ball.

It is a once in a generation development opportunity, that could make AMLO’s tenure as President of Mexico a huge success.

Mexico established a brand new, and specially empowered 25,000 man National Guard force dedicated to border protection and migrant control. They put an end to those caravans back in January, down near Mexico’s Southern Border - over 1,000 miles from ours.

This caravan is a challenge to that force, the Mexican President’s ambition, and the legitimate National interests of Mexico.

I anticipate that the vanguard of this caravan will be given a new part in their hair with riot batons, and wake up being transported South.

I have said many times here I despise Mexico and I despise Mexicans. They have been violating our border for decades, causing chaos, crime, murder, sponging off our welfare system, flooding hospital emergency rooms, over crowding our schools and bringing in drugs and engaging in human trafficking.

I am one American who will NEVER forget May 1, 2006 when thousands of Mexicans carrying their damned flag marched in the streets of cities across this nation yelling “Si Se Puede’’ Yes We Can’’.

Now their borders and immigration laws are being violated and they don’t like it. F’ing hypocrites.

There are good and bad among any group - even good people are bad sometimes.

You can see some Americans (like Antifa) march around with hateful signs as well - doesn’t mean that you, or all otherAmericans, should be lumped into the same category with them.

When the Mexican economy is doing really badly, Law enforcement has to fight a higher tide of illegal immigration.

We need the whole spectrum of pull and push factors to augment strong border security and law enforcement, to get the best outcome for minimizing illegal immigration.

Mexico has never been an ally of ours. They are one of only two countries fortunate to share a border with The United States and yet they hate us. I’m sorry, but I hate them too. As I said will never forget May 1, 2006 and the utter disrespect and contempt they displayed for America.

When you march through the streets of someone else’s country waving the flag of the country you ran away from that’s an act of war.

16 posted on 10/02/2020 2:35:06 AM PDT by jmacusa (If we're all equal how is diversity our strength?)
[ Post Reply | Private Reply | To 15 | View Replies]
To: BeauBo
Last month I suggested Mexico build its own Wall (Bollard type) along its Southern Border. I was asked rather pointedly by another Freeper,"When was the last time you heard of a caravan coming north?" Well, now he has his answer.

And the entire Belize/Guatemala Border would not need to be Walled off due to impenetrable jungle. Time to repel boarders before we have to board them. At the Mexican Border (southern) or our own border with Mexico. 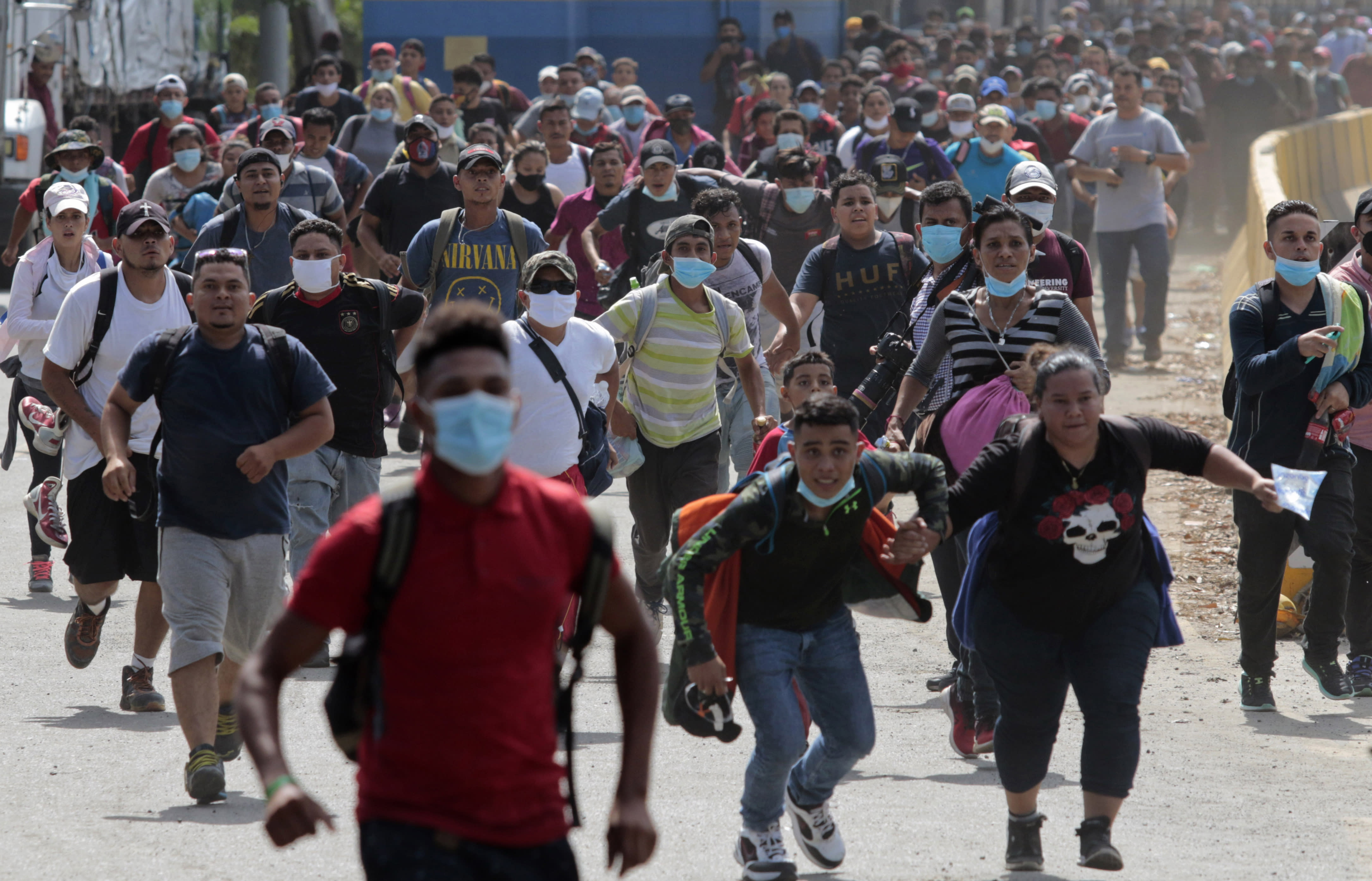 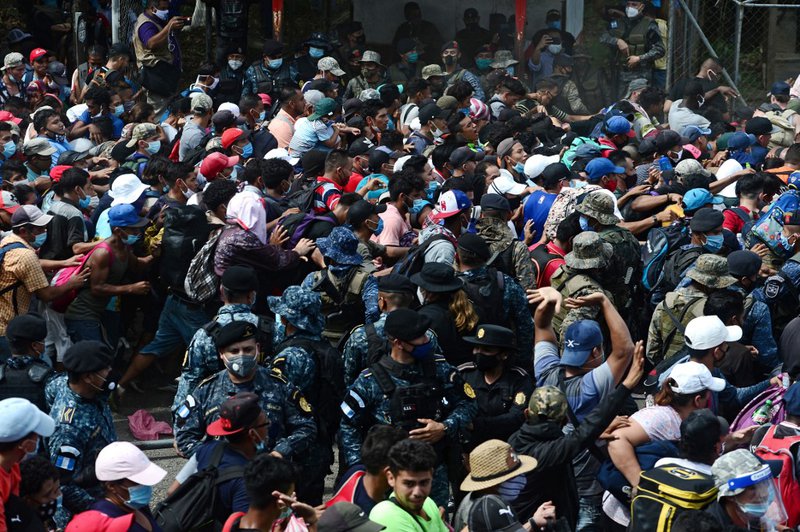 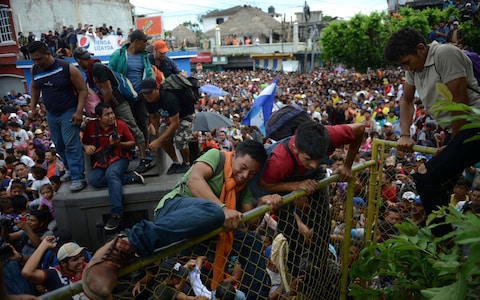 Most are men with a few children for good measure.