A “Culture of Lawlessness” in D.A. Offices. Progressive prosecutors around the country have failed to pursue justice for the public.
City Journal ^ | September 25, 2020 | Jason C. Johnson

U.S. Attorney William McSwain of the Eastern District of Pennsylvania blames Philadelphia District Attorney Larry Krasner for the rise in violence in the City of Brotherly Love. Krasner’s policies, McSwain announced, “create a culture of lawlessness; they leave criminals emboldened; and they have inevitable consequences.” Indeed, since Krasner took office in 2018, homicides are up 49 percent and shootings have climbed by 59 percent. If the trend holds, Philadelphia will tally more than 450 homicides in 2020—the highest count in nearly 30 years.

Crime is spiking precisely because Krasner isn’t holding serious offenders accountable. An analysis by my group, the Law Enforcement Legal Defense Fund, found that Krasner is failing to prosecute felony offenses. Compared with his predecessor’s average conviction rates, Krasner either dropped or lost 26 percent more of all felony cases. More robbery cases (up 14 percent) and auto theft cases (up 37 percent) were dropped or lost. In drug sales (not possession) cases, Krasner dismisses or loses 55 percent of cases, compared with the 34 percent rate of his predecessor.

On taking office, Krasner had released Elliot, who went on to violate parole when police caught him trying to sell cocaine. That same day, Elliot killed a man. Months later, Elliot murdered O’Connor, who was trying to apprehend him.

Should be hunted down like the animals he releases by the families of the victims that would otherwise be alive today if not for his deliberate irresponsibility and actions.

In a FAIR world, George Soros would be in PRISON!

And some guy in PA is spending a year in jail for hosting two parties.

The law is worthless if it is just used as a weapon of war by those in positions to use it as such. Lawfare is normalized in our society and leftist democrats are to blame.

This mother, sitting far away from others in the bleachers and watching her son play football, is violently tased and arrested in front of her children for not wearing a mask in public (even though the state has no edict to wear one outside). She's a Terrorist, donchaknow. 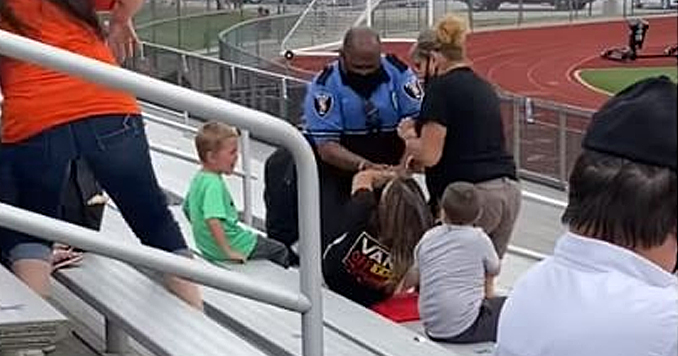 Anyone know where the President is during any of this? Tweets don't count. How about some Federal action?

This is the same as if the Mafia took over the DA’s office. I Wonder if this is a RICO type case.

I think using the word “failed“ is incorrect in this context.
More appropriate would be “refused”...willfully refused to follow the law they SWORE to uphold. No failure, at all. IMHO

What part of uphold the laws as written escapes these POS.

Larry Krasner is the reincarnation of Leon Trotsky. (Bronfstein). Where are Stalin’s guys with that ice pick?