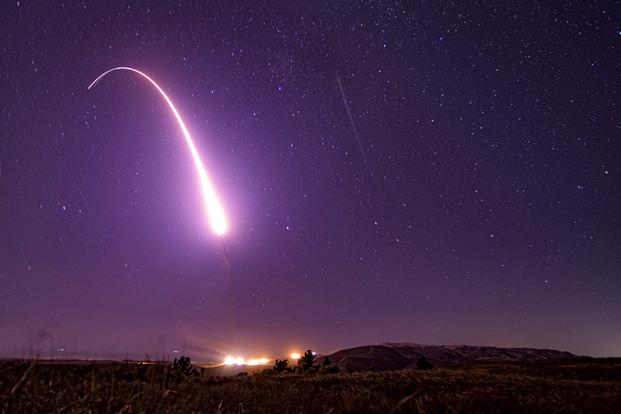 The U.S. Air Force has awarded Northrop Grumman a $13.3 billion contract for the engineering and manufacturing development (EMD) phase of the service's next-generation intercontinental ballistic missiles to replace the aging Minuteman III ICBMs.

The service on Tuesday said the contract for the Ground Based Strategic Deterrent, known as GBSD, aims to replace the 1970s-era ICBMs by the late 2020s. Northrop Grumman was the sole bidder for the program after Boeing Co. dropped out of the running for the EMD contract last year.

"Modernizing the nuclear strategic triad is a top priority of our military," said Defense Secretary Mark Esper in a service news release. "It's key to our nation's defense. It provides that strategic nuclear deterrent that we depend on day after day -- that we've depended on decade after decade."

"I am fully confident in the evolutionary warfighting effectiveness GBSD will ensure," he said in the release. "The increased accuracy, extended range and improved reliability will provide the United States a broader array of options to address unforeseen contingencies, giving us the edge necessary to compete and win against any adversary."

The service is responsible for two of the three legs of the nuclear triad -- land-launched nuclear missiles and aircraft with nuclear bombs and missiles.

“Hypersonic warheads?” No, just extra large burrito for lunch, thanks for asking;-)

Existing ICBM reentry vehicles (warheads) are already waaaaay into the hypersonic realm. They travel at about Mach 24, while the definition of hypersonic is Mach 5 or above.

More winning, gotta keep ahead of the Wangs, ‘ya know

Yep, after a certain point its impossible to stop an ICBM warhead.

A laser “might,” maybe get one while its in ascent or high above the atmosphere, but there simply is no tracking tech possible to do so 100% of the time, and definitely not when its approaching target.

They are hypersonic. Some film of an inert MMIII warhead in the late 70s came spinning in and hit at the edge of the beach on the atoll. It was a little off its expected target and hit an empty small steel building at the edge of the beach where they had cameras. When the warhead hit the building there was a blinding thermal flash and the building and nearby palm tree evaporated.

9 posted on 09/09/2020 9:00:57 PM PDT by minnesota_bound (homeless guy. He just has more money....He the master will plant more cotton for the democrat party)
[ Post Reply | Private Reply | To 8 | View Replies]
To: SeekAndFind
Uh oh! Those grubby military industrial complex giants gets another chance to charge the wringer out of the US taxpayers in exchange for Toys That Goes Boom!

Also with the prevailing mindset in the Pentagon for the past 12+ yrs of making stuff like the Littoral Patrol ships (which is basically an aluminum soda can) and the latest generation of Ford Super Carriers (that has major issue incl launching and landing aircrafts + massively embarrassing toilet problems), my gut feeling is that with these newest generation of ICBM's, they will be doing yet another crazy cluster-fluck, i.e. featuring the new Ultra-Tiny Warheads of 0.1-50 Kilotons.

The reasoning for these ridiculous designs is that since the USA has mastered ultra precision strikes, then there isnt any need for any warheads beyond 50 Kilotons anymore.

The USA military has long started on this road for nearly a generation, therefore it wont surprise me one bit. Those who know me, have heard me lamenting how the USA Military has been relishing in the fancy ultra-small and ultra precise for many yrs now while our rivals are making weapons that are many times the destructive power.

Our generals seem to think that we can always mouse-click our enemies into submission.

Mark my words, though I do hope I am wrong for the sake of this country.

10 posted on 09/09/2020 9:02:08 PM PDT by prophetic (Trump is today's DANIEL. Shut the mouth of lions Lord, let his enemies be the Cat Food instead.)
[ Post Reply | Private Reply | To 1 | View Replies]
To: prophetic
That grubby military industrial complex has kept your ass free since...well forever.

I worked Minuteman while in the USAF through four major upgrades. I was fortunate enough to be trained in the latest and greatest iteration for deployment in 1974.

The missile system design is from the late 1950's and was the first major weapon system to use transistors. Yes, that is still the technology for them to this day.

I'll bet you threw out all of your consumer electronics from that generation, 30 years ago.

There are ~40+ GMD ABM’s at Fort Greely in AK and a couple in Vandenberg AFB designed to intercept nuclear armed RV’s aimed at the USA during the mid-course phase of their ballistic trajectory. These are 2nd generation hit-to-kill interceptors. The first gen was the Safeguard nuclear-armed interceptors that were retired in the mid-70’s.
How reliable is our GMD? I assume there may have been issues since I had heard that replacement interceptors were in development but the replacement program was cancelled a few years ago. Maybe the issues were resolved. I don’t know since I’ve been retired from that business since 2009.
As you stated, terminal phase intercepts of RV’s is very difficult. They enter the atmosphere at Mach 24, but rapidly decelerate to low hypersonic speeds. It’s possible that a THAAD interceptor could be used in a pinch if it’s based near the aim point.

The GBSD MM3 replacement will use refurbished W78 and W87 warheads that are presently used on MM3. Those are like between 350 to 500 kilotons, so that is no firecracker.
Little boy was 13 kilotons.

My son is a physicist for Northrup-Grumman.

14 posted on 09/10/2020 9:58:03 AM PDT by blam
[ Post Reply | Private Reply | To 1 | View Replies]
To: prophetic
If Northrop Grumman engineers missiles akin to how it programs moral trajectory and anatomical correctness then Russia and China need not worry.

15 posted on 09/10/2020 5:48:48 PM PDT by daniel1212 (Trust the risen Lord Jesus to save you as a damned and destitute sinner + be baptized + follow Him)
[ Post Reply | Private Reply | To 10 | View Replies]
To: minnesota_bound
From the article, which I thoroughly enjoyed thank you. Legend has it that in a meeting with US diplomats in 1972, Zhou Enlai was asked what was the significance of the French Revolution. His answer was, “It is too early to say.¹³ But the jury was out on Communism long before the Opening of China. In case you missed it in class, communism was not just a deeply-flawed economic model; it was a criminal enterprise that enslaved and murdered millions of people¹⁴.
16 posted on 09/10/2020 6:41:52 PM PDT by Delmarksman (Pro 2A Anglican American (Ford and Chevy kill more people than guns do, lets ban them))
[ Post Reply | Private Reply | To 9 | View Replies]
To: pfflier
LOL, I spontaneously chuckled when I read your reply.

Dont get me wrong, I'm not an Anti-Military, Anti-American nor an Anti-Trump in the least way; I'm actually very Pro Trump/Military/USA all the way.
My grouse is that I'm tired of seeing every new generation of weapons seems to be having major issues as I've mentioned above yet they seem to be designed to be more of a POP weapon vs a real BOOM weapon, esp as the military's love for ultra-precision consumes everything they touch.

I agree with you those ICBM birds has kept the USA free from aggression since WW2 and fyi I do still have most (if not all my electronics from 30 yrs ago, unless they were broken and tossed out or my ex-wyfe took them :-)

And thanks for your hard work & sacrifice on those projects.

those super expensive weapons are the only reason we can continously and imperviosly shirk our national debt by merely adding zeros to our make-believe digital money supply. anybody tries to call it in, we send it to em in MRVs at mach 24.