Joe Rogan has one of the biggest megaphones in the country, and this week he used it to send a message to a famous critic.

And it wasn’t pretty.

Clearly, Rogan heard about the Tweet and indirectly fired back at the starlet from his podcast perch this week. He stuck the rhetorical knife in slowly.

“I think we should leave it all to Alyssa Milano,” Rogan cracked after Dillon said he’s sick of every single American weighing in on every single political topic.

“That’s the way to be relevant now is to be … political,” Dillon said, leaning into the pregnant pause. “All day, every day.”

“That shift where you go from actor to activist, all in, as soon as the f***ing calls stop coming in, you’re like, ‘all right, I’m an activist,'” Rogan said without mentioning Milano directly. The actress continues to find work, including a gig on Netflix’s “Insatiable.” She generates far more cyber ink, of late, for her activism (and hypocrisy).

Dillon said most stars are self-absorbed and not truly plugged in to the latest news.

That’s all well and good, except the same stars aren’t as magnanimous in real life, he contended.

“I’ve seen them make people cry backstage at a theater because there’s not enough water in the dressing room. It’s those same people who are really cruel going out and telling everybody how good of a person they are all of the time,” Dillon said.

Rogan noted the monolithic nature of celebrity activism, suggesting it’s just another role for some.

“They find the pattern, the way they have to talk and the things they have to talk about, and they lock into those things with no deviation. They find whatever the line is where Hollywood wants. It’s always Left. always super progressive, always super woke, and they f***ing ride that line like a railroad train -- no deviation, and it’s so obvious.”

Dillon said some stars get political to secure their next gig.

“They’re doing it so someone can see them and say, ‘you know, he had a great [Mayor Eric] Garcetti tweet. He should write on ‘Bojack Horseman,'” Dillon said.

One of Milano’s upcoming acting gigs? A TV movie dubbed Alyssa Milano for Mayor written by … Milano herself.

They’re bringing back Who’s the Boss?, and Tony Danza and Milano will be in it. I never watched it, because I don’t like sit-coms.

These people live in their own reality. La la land.

I wonder why people care about what she says when she hasn’t been popular in a while.

I only care about what her boobs say. And even those are fake.

I don't know why. Maybe they should bring back Embrace of the Vampire
her t*ts are her only talent (and she bought them)

I watched that podcast with Tim Dillon, never heard of the guy but he’s funny as hell. He goes after the right some, but way more after the left.

I don’t and never did. Who is she anyway?

I wonder how much of her “activism” is an effort to upstage Rose McGowan.

My brother loves Rogan. Saw him live & said he was great.

They're heading south in a hurry.

Even though I regard Joe as a typical showbiz entertainment industry nitwit, I pull him up on YouTube once in a while because I can pick and choose, skip around in his vids, and he's pretty funny. His standup really kinda sucks. As most know, he was on the TV show "Newsradio", is eyeballs-deep in MMA, and recently got that giant Spotify contract.

So as soon as she starts criticizing the Democrats this guy starts busting on her?

14 posted on 08/22/2020 10:15:29 AM PDT by BlackAdderess (Authoritarians are all about cancelling people who disagree with them.)
[ Post Reply | Private Reply | To 1 | View Replies]
To: rktman
It's going to be hard for AM to do anything after being disemboweled on Twitter by Rose McGowan. 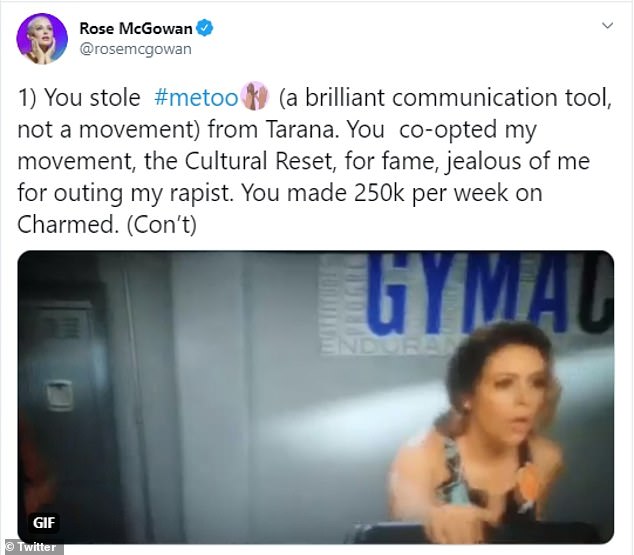 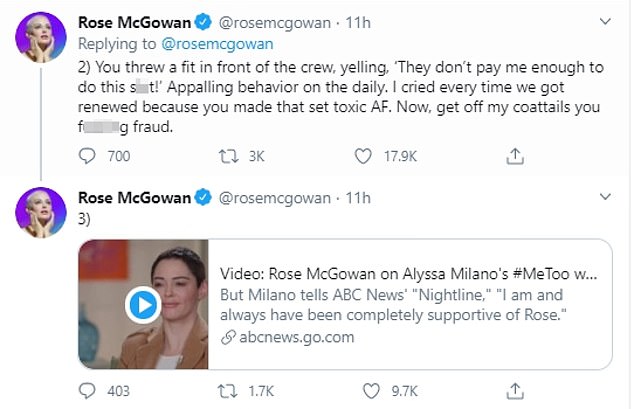 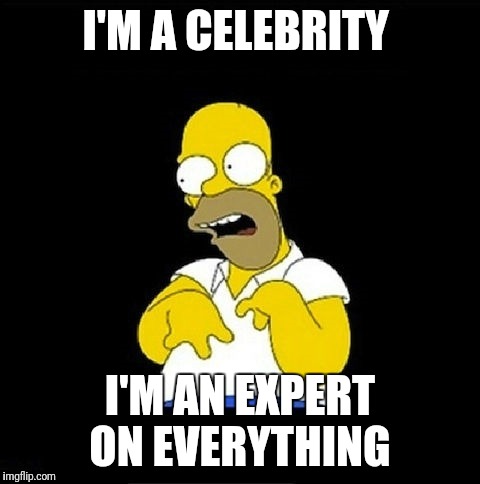 When I want thoughtful insight I'll listen to bubble dwelling substance abusing narcissistic self absorbed drama queens who got insanely rich parroting lines given to them and playing make believe. And to think when I was a kid I was made fun of for believing pro wrestling was real.
16 posted on 08/22/2020 11:12:33 AM PDT by Impala64ssa (Virtue signalling is no virtue)
[ Post Reply | Private Reply | To 1 | View Replies]
To: Impala64ssa
WUT?! Pro wrestling isn't real? What next? Santa, tooth fairy, leprechauns, unicorns, obxxx was an awesome POTUS? 😂📴
17 posted on 08/22/2020 11:17:11 AM PDT by rktman ( #My2ndAmend! ----- Enlisted in the Navy in '67 to protect folks rights to strip my rights. WTH?)
[ Post Reply | Private Reply | To 16 | View Replies]
To: mass55th
They’re bringing back Who’s the Boss?, and Tony Danza and Milano will be in it.

But they will play the grandparents' roles. Time passed them by.

She was the idiot that thought a sex strike would help her pro abortion cause.