Is anyone keeping an arrest record?

Yeah, so far they are throwing a shut out. Bottom of ninth, nothing on the board for us.

In way over his head? Heck, Jeff never even dipped a toe in the water.

I think Durham is focused on the corruption with legislators and Ukraine OR Barr has has the Texas prosecutor reviewing Durham’s findings it is DAMN HARD to prosecute in the SWAMP!! Perhaps helping Durham to put the case together!!

.
They just showed Jeff Sess a Video of someone making a Statement about him - and he did whatever they said.

Same thing got him out of retirement

what with ALL the magic negro’s little plagues none, so far have entangled the POS
But wit, reackoning is coming.

American government is so good at reviewing stuff and talking about it. It also pays well for government but we pay for it and get nothing in return. 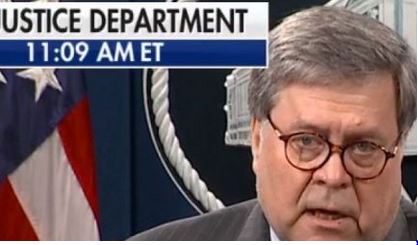 this smutchz who said: Barr says he does not expect criminal investigation of Obama or Biden

if the ag won't investigate criminality at the highest level, what is he worth?

“how did that work out?”

Yet another perspective is that Barr and Durham have found enough evidence of political unmasking that they need another investigator to look deeply into it. This allows Durham and Jensen to focus on their “suspects and evidence” while adding the new investigation to it to bolster their case and possibly turn more rats.

“this smutchz who said: Barr says he does not expect criminal investigation of Obama or Biden”

We would get our asses kicked politically if we went after either of them. But throw the rest in jail and the corruption of Biden/Obama will be clear to everyone.

The R’s must be planning to Ballot Harvest just like the D’s, or have some method of ensuring that Trump gets re-elected. Bulk mailed ballots to all registered voters is a recipe for a Biden landslide.

Otherwise, this is just an act of temporary public embarrassment for the coup plotters.

If Biden gets elected, his AG will drop all charges and the Flynn case (and Mandamus appeal) will have firmly and freshly set the precedent that the DOJ determines who gets prosecuted. Or, Biden will pardon the whole bunch “to put the matter behind us”.

I haven't checked the dockets, but, I suspect that the Western District of Texas (aside from Wetback & drug problems) might have a caseload that favors diverting the efforts of its U.S. attorney for for a brief spell -- and a good cause...

My thoughts are - IF Barr/Durham is considering a conspiracy or RICO prosecution then they have to include a good case for all of those being charged. If, say, 120 people are included in the case {DS bureaucrats, politicians + media derps + whoever} then it takes time to legally establish all the connections.

That is my understanding. I suppose DoJ could refile the conspiracy or RICO case to add new defendants, I am not sure. I am just saying that I suspect that if they are filing a broad based case it might take time to establish the total scope of the conspiracy / RICO.

Of course it is possible that DoJ is just dragging their feet in hopes that DJT loses the presidency either through election or impeachment. I DO know that AG Barr has said that if they do not complete their case prior to November then there is a chance that the whole effort will be for naught.

I am 100% sure the whole shebang has taken this long due to the RICO prosecution as you describe. Plus that foreign actors were involved is more legal complexity.

I am also postiive that the DoJ is not dragging their feet. Sessions cleaned it out mightily, Whitaker continued cleaning, and Barr is a honey badger on the side of law and justice.

What Barr actually SAID was according to evidence he had TODAY, he didn’t expect criminal investigatinos of 0bola or Bite’m.

That was several days ago. He read his statement, and it was extremely precise and lawyerly.

Matthew Whitaker is really an unsung hero in this. I am pleased that he appears regularly on Fox. If the good guys regain control of the govt I foresee a great role for Whitaker in some official position. He has always spoken more honestly and unapologetically than any other person in the DoJ exposition.

You can just in his face his character.