Earlier in the day, the Department of Justice accused Todd of “deceptive editing,” prompting NBC to admit having “inadvertently and inaccurately cut short” the clip, adding “we regret the error.”

In a segment on “Meet the Press,” Todd played a clip in which Barr, during an interview with CBS News’ Catherine Herridge on Thursday, was asked how he thought the history of the Flynn decision would be written.

“Well, history’s written by the winners,” Barr began with a chuckle. “So it largely depends on who’s writing the history.”

That’s where the edited clip as shown on the NBC show ended. Todd, who had earlier prepared viewers to “wait until you hear this answer,” declared that he was struck by its “cynicism.”

“It’s a correct answer,” Todd said. “But he’s the attorney general. He didn’t make the case that he was upholding the rule of law. He was almost admitting that, yeah, this is a political job.”

A fuller version of the CBS interview, however, shows that Barr had in his very next words said precisely what Todd accused him of not having said – that the move to dismiss charges against Flynn “upheld the rule of law.”

“Well, history’s written by the winners. So it largely depends on who’s writing the history, but I think a fair history would say it was a – it was a good decision because it upheld the rule of law. It helped – it upheld the standards of the Department of Justice, and it undid what was an injustice.”

“Compare the two transcripts below,” Kupec said. “Not only did the AG make the case in the VERY answer Chuck says he didn’t, he also did so multiple times throughout the interview.”

More than six hours later, NBC in a tweet responded to the DOJ criticism:

“You’re correct. Earlier today, we inadvertently and inaccurately cut short a video clip of an interview with AG Barr before offering commentary and analysis. The remaining clip included important remarks from the attorney general that we missed, and we regret the error.”

In his subsequent tweet, Trump suggested he did not buy the argument that the “error” was inadvertent.

“Sleepy Eyes Chuck Todd should be FIRED by ‘Concast’ (NBC) for this fraud. He knew exactly what he was doing. Public Airwaves = Fake News!”

Critics of the president are appalled by the DOJ decision to drop charges against Flynn, a move that came after Barr appointed a new prosecutor to review the politically-charged case.

House Judiciary Committee Chairman Jerrold Nadler (D-N.Y.) in reaction to the decision described the DOJ as “politicized and thoroughly corrupt,” and called for an investigation by the department’s inspector general.

In his CBS interview, Barr disputed that he had acted at the bidding of the president, saying that he was “doing the law’s bidding.”

Barr said he was prepared to take flak for the decision, but added, “I also think it’s sad that nowadays these partisan feelings are so strong that people have lost any sense of justice.”

I’d fire him for getting out of bed in the morning.
But that’s me.

If they had any ethics he would have been fired.

And he should be taken out back and have the crap knocked out of him as well.

Seriously, that’s what the left is begging for.

These people are living in the past. They could get away with incredible lies. “No starvation in the Ukraine - 6 million dead,” Dan Rather and his Bush memo. The internet has put a stop to most of it although even conservatives are still saying the Russians “hacked” the DNC.

And the same for the rest of the #FakeNews propagandists.
They know what they are doing and it isn’t reporting news. 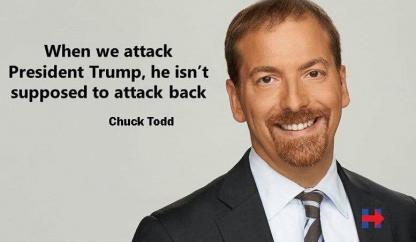 Just ban all Comcast affilited news organizations for White House briefings. Put a large screen outside in the heat rain and snow and let them veiw it on close circuit, to keep thier precious 1st amendments rights (that they dont care are violated for Christian groups) in tact

Barr never so much as paused after saying the winner writes history, but said —- without skipping a beat —- that his decision rights a wrong.