Professional Courtesy has Run Amok at the Department of Justice
American Thinker.com ^ | May, 12, 2020 | John Dietrich

The level of corruption in the Department of Justice is astounding. Bureaucrats receive little or no punishment for serious infractions, as illegal activity is frequently overlooked as a result of what is called professional courtesy. For instance, a police officer might not ticket a fellow officer for exceeding the speed limit. This is almost excusable; we often excuse behavior by a family member that we would not tolerate in a stranger. But when a life-threatening situation is excused it is no longer a matter of courtesy. Allowing a highly intoxicated driver to proceed with only a warning does no favor for the driver or his potential victims.

It appears that the U.S. Department of Justice (DOJ) is metaphorically allowing our judicial highways to be flooded with drunken drivers.

Judge Emmet Sullivan, the highly respected judge in the Michael Flynn case, is capable of outrage. He told General Flynn, "Arguably, you sold your country out," and “I’m not hiding my disgust, my disdain for this criminal offense.” Sullivan questioned prosecutors, "Could he have been charged with treason?” Clearly it does not appear that Sullivan plans to go easy on Flynn.

Sullivan is much more forgiving of his colleagues in the legal profession. For the record, he has made many denunciations and threats in response to gross misconduct by prosecutors. However, consequences have been minimal. Sullivan has had a great deal of exposure to prosecutorial misconduct. He presided over the trial of Senator Ted Stevens. The prosecution's criminal activity in this case was so blatant that the conviction was thrown out. Unfortunately, Stevens lost his Senate seat giving the Democrats a 60-seat filibuster proof majority as Brack Obama first took office as president.

Professional courtesy isn’t “you hide my crimes and I’ll hide yours” outside of the DNC, Deep State and Mafia. 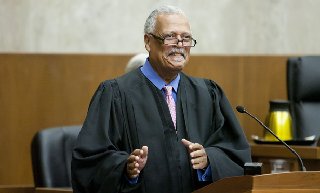 The rent is too damned high !

I sure hope Sullivan does the correct and logical thing and free Flynn.

How long before Sullivan rules on the case? He is being given cover for making his decision, and still denouncing Flynn (Barr, President Trump) by Obama and so many others. It isn’t going to be clean.