To modify T S Eliot in "The Hollow Men" (whose theme seems not inappropriate), this is the way the world ends, not with a Bern but a whimper. As I said on Rush the morning after Super Tuesday, Senator Sanders blew the 2016 election with a single line - his crotchetty insistence to Mrs Clinton that he was "sick and tired of hearing about your damn emails". That told Hillary that he wouldn't go after her on the subject of her corruption and lawlessness. Which in turn told Hillary that Bernie wasn't serious.

And so it proved.

Four years later, he was now, I said on the radio, making the same mistake again - in a pitiful Super Tuesday speech too gutless to mention Joe Biden by name. If he didn't butch up before Michigan, he'd be over. That means not oblique references to unspecified candidates whose positions on Social Security and 2008 bailouts he disagrees with, but clobbering Biden by name on a) his decades-long corruption; and b) his more recent but increasingly obvious cognitive impairment. Only if a Democrat makes either an issue will the court eunuchs of the American media be obliged to cover it. Absent that, in the post-Iowa/New Hampshire avalanche of primaries, people vote on a vague recollection of Joe Biden from fifteen years back, when, by comparison with a Castroite crank flapping his arms around, he seemed "likeable" - or, in the dreary clichés of presidential politics, the candidate you'd enjoy sharing a beer with - even if Joe had no idea he was sharing a beer with you and was convinced he was sharing a margarita with Esther Williams and Mikhail Gorbachev. 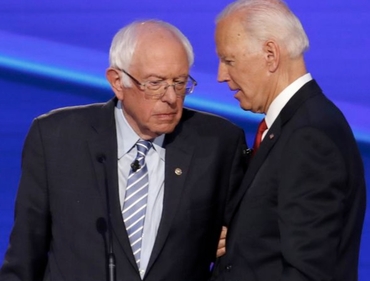 I was hoping he would just use the platform for advertising

his issues, but I fear the consolidation will happen much

All those souls, who were so brave and dismissive of CV,

I wonder how they’ll feel of 8 years of Biden/Abrams.

Sanders is a faculty lounge revolutionary. He learned nothing from Donald Trump’s formula for success: take the fight to the enemy and don’t apologize. The moment the media made him disown the Bernie Bros criticisms of Biden’s past-record and dementia, it was all over.

It’s becoming increasingly obvious that, much like Romney, Sanders was never serious about winning. His reluctance to mention Biden by name and to refuse to address Biden’s corruption and cognitive decline were dead giveaways that he never had any intention to see this thing all the way through. What I’m not certain about, though, is his motive for whipping up all his Bernie Bots, Bernie Bros and Antifa collaborators into such a frenzy: whether he simply wanted a soapbox to disseminate his communist views or whether it was be be rewarded by his masters after the dust settled.

5 posted on 03/13/2020 6:30:03 AM PDT by Stand Watch Listen
[ Post Reply | Private Reply | To 1 | View Replies]
To: littleharbour
The 2 defining moments in the 2016 election was when Trump brought the 3 Bill Clinton victims to the debates and when he told Hillary to her face that he would pick her up.

The country saw that he was a real fighter unlike the many limp wristed poodles who had paraded themselves on the political stage before the country!

Oops, I meant Lock Her Up!