“Japan is emerging as one of the riskiest places for the spread of the coronavirus, prompting criticism that Prime Minister Shinzo Abe’s government has misfired on its policies to block the outbreak. The number of infections in Japan has more than doubled in the past week to 74, rivaling Singapore as the country outside mainland China with the most cases. The government is being faulted for being too slow to bar visitors from China and too lax in its quarantine of the Diamond Princess cruise ship, where infections surged during two weeks docked in Yokohama.”

“What appears to be more troublesome is that Japan is starting to see a surge in cases in multiple areas across the country — sometimes with little to link the outbreaks.”

“While a handful of the cases in the country are evacuees from Hubei province, the vast majority are Japan residents, many with no history of traveling to China. Among those have been several taxi drivers, suspected of having extensive interactions with the public before their diagnoses.”

“Tokyo rush-hour trains remained as packed as ever”

“With the cases mounting internally, Japan received a rare rebuke from the U.S. Centers for Disease Control and Prevention over the way it managed the quarantine on the cruise ship, saying “it may not have been sufficient to prevent transmission.” The U.S. and others placed a 14-day quarantine on repatriated nationals, but about 500 people cleared by Japan left the ship Wednesday to go about their normal lives, and were told to call authorities if they feel ill.” 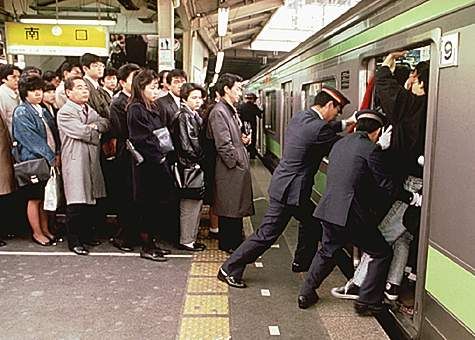