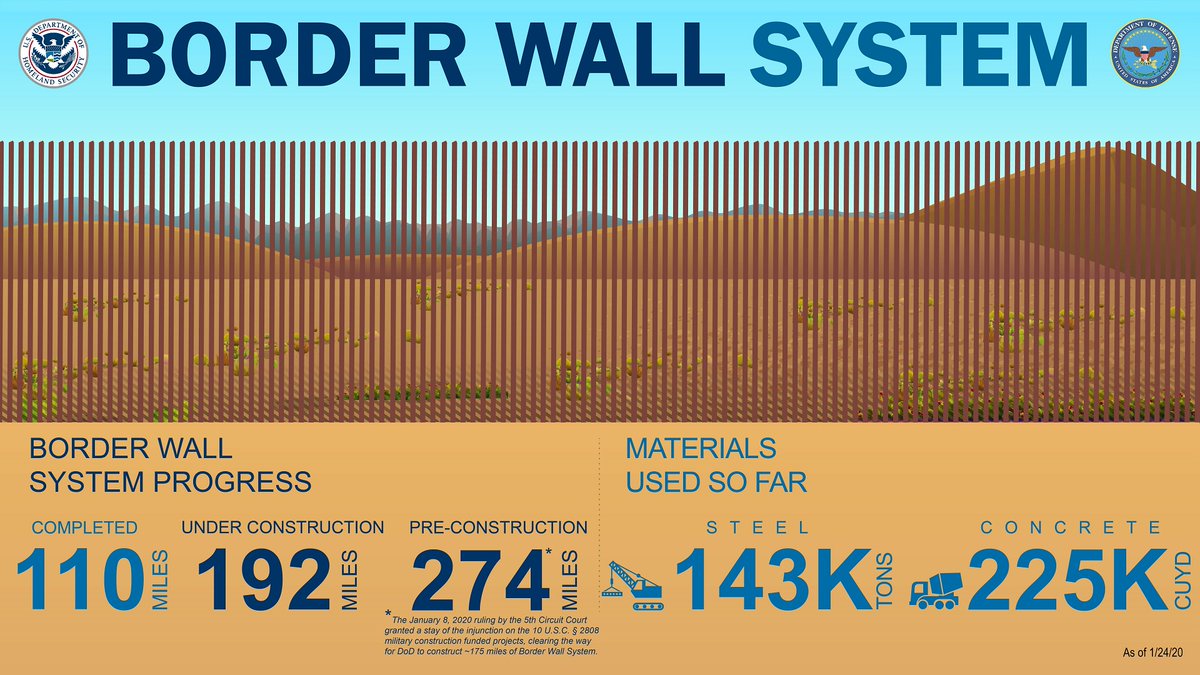 Just two months ago, we were running at two miles per week. Last week five miles was completed.

The biggest (by far) contract awards are being prepared now. $5 billion is on hand, and over $7 billion more is likely coming available soon.

Thank you for the updates.
The future of our nation relies on securing the border and restoring the rule of law.

Major interior enforcement is needed.
We have a lot of bailing to do once we stop the deluge.

border wall is a no brainer finacially-

$25 Billion for the wall

thanx for the update beaubo.

PS. last week I posted a question to you re: spec of private section of wall in mission. “does it meet gummit specs” for the rest of the wall??

DoD is currently reviewing a request to fund 270 additional miles. That review is scheduled to complete this Friday, 31 January.

It seems quite likely that this will be approved. Along with some other re-purposed money (likely Treasury Department Asset Forfeiture funds), many more miles will be added to these charts in the coming weeks - but these official weekly numbers from the Border Patrol won’t include them until the money is formally made available.

Bottom line: There are really 885 miles now in the works (including those completed during the Trump Administration).

Thanks Passed it on.

Thanks for your reality updates, instead of the insane ranting that nothing is being done.

“re: spec of private section of wall in Mission (Texas). “does it meet gummit specs” for the rest of the wall?”

Generally speaking, and really quite substantially, it does.

Fisher is quite wired in to what the Government wants. They have been among the relatively small pool of Contractors who have been screened and admitted into the Task Order bidding process for the large standing contracts (MATOCs - Multiple Award Task Order Contracts) used for building the Trump Wall System.

So they have been reviewing the Government specs for Trump-style Wall System, and preparing detailed cost estimates to bid on segments, for a couple of years now.

Fisher’s business plan is to sell the segment that they are building in Mission to the Government, so they are strongly incentivized to be sure that they meet the core requirements and specifications.

The specs actually are flexible to adapt to local terrain, environmental, and operational requirements. When there are steep slopes, stream beds, solid rock or saturated swamp; the local design specs must be adapted. (Notably, Fisher has chosen to galvanize their steel bollards against rust in the wet and humid environment in the Rio Grande Valley, at the river’s edge) Also, the required features themselves will change from place to place. Some places require double layer thirty foot barrier, others just a single eighteen foot barrier. Some places get lights, others don’t, and so on.

So there is a distinction between functional requirements (Why they need it), and detailed technical specs (dictating exactly what, and how to provide it).

Clearly, the main aspects of Fisher’s project in Mission are within the both the functional requirements, and the general specs, which are easily apparent. The bollards are eighteen feet tall or better. All weather access road is included. A 150 foot cleared observation area is included. Compatible sensors are embedded in the concrete. Compatible camera towers, lights and underground utilities (electricity and communications) are included. Functionally, it is a wonderful infrastructure to support Border Patrol operations.

“Just two months ago, we were running at two miles per week. Last week five miles was completed.”

I was trying to point out that we have apparently jumped up to a higher rate of production during January, as more crews have started work. That 4-5 miles per week seems to be the new normal.

We are on track for a bigger increase in the rate of construction as this year progresses, but we have already seen it significantly occurring over the last few weeks.

Someone on another thread brought up the fake news story by MSN today about part of the wall falling down. It’s clearly old wall. They posted it to make us all aware of the bovine scat flying around.

Anyway, I was wondering if there are any specs available on the wall panels going in. I read that originally that the panels were to go six feet underground. Has that design specification been fulfilled?

The 18 foot bollards have reinforced concrete foundations at least six feet deep, and two feet thick. The thirty footers usually have more in some dimension.

The design can vary from spot to spot, based on the soil, slope and hydrology; but about six feet deep and two feet thick is the minimum for the Trump-style bollards. This deters or defeats most “man on the street” or local kids’ attempts at digging under the barrier.

Also, although it is not talked about much for security purposes, embedded sensors seem to be part of all the new bollard Wall System, to detect tunneling or breaching attempts (sawing through). These can detect digging some distance below the foundation, as well as attempts to tunnel through the foundation itself, for better resourced attempts at deliberate tunneling.

Additionally, most , if not all of the new bollard Wall System includes an access/patrol road running right along next to the bollards. That allows vehicles to tow high power ground penetrating radar systems along the length of the wall, sensing for deep tunnels.

A line of towers parallels the bollards, as part of the wall system, with additional types of sensors, such as day/night cameras, to detect attempts to get over the barrier (including flying, like drones).

So in addition to being a rugged physical barrier, the Wall System is designed as a “linear detection system” - that is to say, it is a line that is exceptionally hard to cross, without alerting the Border Patrol. The included technology is sometimes called “virtual wall”, and it is layered on top of the visible, physical barriers, taking advantage of the continuous run, the cleared observation areas, and the buried utilities for power and communications. Once all this heavy infrastructure is installed, it is relatively quick, cheap and discreet to deploy additional new types of
sensors in the future.

Access roads and Border Patrol deployments are designed locally, as part of comprehensive “Wall System” design, to match the response times required to the detection times that the Wall System technology provides. That kind of “Border Calculus” (time to intercept = detection time - disappearing time) is also used in rural areas, where they don’t even intend to build barrier, because the delay it would provide is insignificant, compared to the time it would take for intruders to get away.

The “virtual wall” of sensors and alarms, matched with the needed access and Border Patrol deployments to enable reliable intercept, is in the process of rolling out for every mile of the Southern Border, not just where barrier is being built. The President has tasked the Department of Homeland Security to achieve full operational control of the Southern Border, they have developed a comprehensive plan that was accepted by Congressional auditors, and the President and Congress have provided the resources needed.

As we see a huge deployment of barrier this year, an even larger deployment of technology will simultaneously be effectively controlling even more miles.