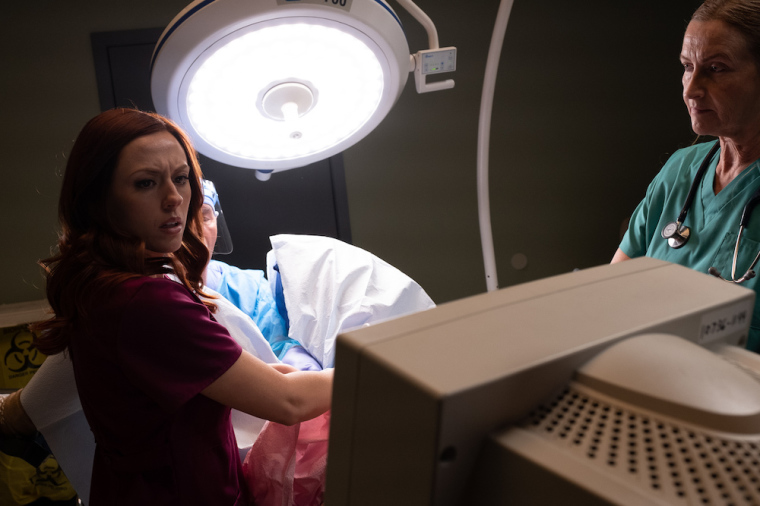 A SCENE FROM THE PRO-LIFE MOVIE, 'UNPLANNED'

Over three dozen faculty members of a Catholic college in Canada are calling for an apology after a film about a former abortion worker’s departure from the industry was screened on campus.

Forty-three faculty members of the King’s University College at Western University in Ontario signed onto a letter criticizing the Catholic liberal arts university for allowing the pro-life film “Unplanned” to be shown to students.

“Unplanned” is based on the life of Abby Johnson, a former Planned Parenthood clinic manager who created an organization to support those who decide to leave the abortion industry.

Johnson has become one of the United States’ most well-known activists advocating for restrictions on abortion. The film depicts violent abortions, women bleeding and complications after taking an abortion pill.

The film was screened on Jan. 9 free of cost to King’s University College students by the college's Campus Ministry, which seeks to facilitate campus life “rooted in the Roman Catholic tradition.”

The screening is part of the ministry’s “Veritas series for Faith and Culture,” which in the past has also featured events highlighting left-leaning causes and speakers such as Father James Martin.

The college’s events calendar labeled the film as an “inspiring true story” that provides an “eye-opening look inside the abortion industry from a woman who was once its most passionate advocate.” In response to the event, pro-choice students and activists held a protest on campus.

Last week, a group of professors that spans across disciplines signed onto a letter sent to Principal David Malloy, claiming that the screening of the film created “furor and fear” throughout campus.

“The ‘Unplanned’ event did not meet the threshold of those elements within the Catholic intellectual tradition,” the letter states.

Specifically, the faculty took issue with comments made by Campus Ministry Director Rev. Michael Bechard to media following the screening of the film. He was quoted as saying that he hopes the film will send a “message to women that we are concerned about unborn children.”

The protesting faculty called on Bechard to issue an apology.

“His position is hostile to women,” the letter reads. “Abortion is a safe and legal health service for women in Canada and is accessed by approximately one-quarter of child-bearing women. Women who have exercised their rights to reproductive care risk being stigmatized and traumatized by the ideological position presented both in the film and in the Director’s statement.”

They also called for the college to affirm that “faculty, staff, and students at King’s University College are not mandated to ascribe to all or any elements of Catholicism.”

"The public endorsement of an anti-abortion stance at King's University College by the Director of Campus Ministry is of great concern to the viability of our institution as we work to recruit and maintain excellent students, staff and faculty."

Bechard, a priest in the Diocese of London, told The Gazette prior to the screening that the goal of the film showing was not to persuade anyone’s opinions on abortion but simply to have a conversation around the issue.

"It's part of our values and our mission statement to support life in all its stages, from conception to natural death,” Bechard said in accordance with traditional Roman Catholic teaching. “And we hope that this will begin to really challenge people to think about how we are responding to the many complex needs in our community.”

Despite his intentions, critics believe Bechard “underestimated the commitment to deep debate at King’s University College.”

David C. Malloy, principal of the college, responded to the faculty’s concerns in a statement posted to the college’s website. He explained that the film screening is “consistent with King’s mission to be a place where controversial topics can be presented and discussed.”

“King’s, like any other university, is where challenging political, social, and religious topics can be discussed in an environment that is respectful and safe,” Malloy explained. “Open dialogue and debate about uncomfortable truths is part of our mission. We are not advocating for any side of this debate but rather being a vehicle for the conversation.”

He said that “uncomfortable truth discussions are not designed to make people feel badly or hurt.”

“I regret that people in our community have experienced anxiety, stress and frustration as a function of this event. As Principal, I take responsibility for this and will strive to create a more open format for future events.”

Malloy added that while pro-choice advocates protested the film, they were invited to “participate before, during, or in the discussion period after film screening.” He said that no one was prevented from speaking during the discussion.

“For example, the protestors used space on campus to make their protest signs prior to the event,” he said. “They also came inside the Student Life Centre (without signs or chanting) during the screening.”

The school created a “safe space” by having security present for the event, just like it has for past Veritas series events, he noted. Malloy assured that the presentation of the film and the belief that life begins at conception is a stance held by Campus Ministry, not the university as a whole.

While abortion may have become “safer” for women over the years, a study from 2018 shows that thousands of women are sent to emergency rooms each year due to complications with abortion.

Must not offend the baby killers apparently.

Old-time liberals: I do not like that movie. So I will not watch it.

Today’s liberals: I do not like that movie. So no one must watch it.

Catholic college? I think not.

This is a Catholic college in Canada is it not?
What is wrong with these people?

RE: This is a Catholic college in Canada is it not?

If we have RINO’s ( Republicans in Name Only ), We can have CINO’s ( Catholic in Name only ).

If this were a REAL Catholic college, why the heck did they employ a large number of pro-abortion Professors? What do they expect these Professors to TEACH their students?

Women or men who are upset by an anti-abortion message had the choice to avoid the movie. They really give the game away when the don’t mention this obvious-to-all-normal-people concept.

>> The faculty argued that the screening of the film did not meet the standards of the university’s mission to uphold “respectful and critical dialogue of difficult subjects in a scholarly, just and ethical manner.”

It’s the Leftwing way or the highway.

People who are offended and want an apology for everything must either be four years old or a fag.

“We want the right to kill your babies and if you object you are being hateful.”

For those of you who have not seen this movie, yes, it’s THAT powerful of a movie - so much that simply airing it sends these people over the edge.

I would highly recommend this DVD. Inspiring, informational and yes, even entertaining.

Faculty on a Catholic university protest against showing a pro life film?

Even Pope Francis isn’t THAT liberal!

His Holiness the Supreme Pontiff of the true Roman Catholic Church does.

No apologies for the defense of life - you Satan- loving assholes!

TO these idiot ‘intellectuals” claim the movie does not meet the intellectual standards. How about the biblical standards and what Jesus would do? It certainly meets Christian standards, and professors at all Catholic colleges and universities.

I am a Catholic, and my position on this subjects is - better for Catholic parents to send their child to a secular university than to send them to a ‘so-called Catholic’ university which promotes immorality in the cause of promoting Democrat voters. Giving scandal to young adult students who are isolated from their parents and home parishes is forbidden as far as I am concerned.

17 posted on 01/24/2020 9:43:26 AM PST by Gumdrop
[ Post Reply | Private Reply | To 1 | View Replies]
To: SeekAndFind
Forty-three faculty members of the King’s University College at Western University in Ontario signed onto a letter criticizing the Catholic liberal arts university for allowing the pro-life film “Unplanned” to be shown to students.

I will accept the resignations of the 43 faculty members after they apologize for their unjustified and hostile response. Faculty with zero common sense should not have a role in teaching our young people.

Maybe they should just close the university and send everyone home.

A clear illustration of terminal AED Syndrome. Not only the students but the teachers and staff. AED - Arrested Emotional Development.

Should be fired immediately.