“Since his death, Soleimani has been hailed as the "Che Guevara of the Middle East" in some quarters…They're packaging Soleimani as this foreign policy guru, martyr, strategist.” (AFP)

Could anything be more idiotic?

Certainly both Soleimani and Che Guevara have vast appeal to vast numbers of people who are malicious, covetous, lazy and stupid. But that’s about as far as the similarities go.

In a way, radical Islam functions as a transnational form of Bolshevism. What communists do (or attempt) within nations, radical Islam attempts among nations, with the U.S. (the Great Satan) and Israel in the role of the local successful businessmen, the kulak, the well-adjusted, the gregarious and happy. Both communism and radical Islam rationalize their adherents’ failures, resentments and frustrations, then license (and even reward) their destructive and bloody revenge. For many mentally unbalanced and/or malicious people, this is a hard act to beat.

But Soleimani actually succeeded as a malicious, resentful avenger/destroyer. Che Guevara failed pathetically, abysmally—even hilariously—at absolutely everything he attempted in life, except at the mass-murder of utterly unarmed and defenseless people.

Unlike Che Guevara, Soleimani actually participated in combat, and even succeeded at it, as success is reckoned in the Muslim world. He rose through the ranks during the absurdly bloody Iraq/Iran war then, as commander/advisor, helped defeat ISIS in Iraq and Syria.

And as far as we know Soleimani managed all that without ever shooting himself in the face with his own gun, as did the pathetic military doofus Che Guevara during the Bay of Pigs, though he was 350 miles from the actual battle. Details here.

Other than his competence at murdering bound, gagged and blindfolded men, Che Guevara failed spectacularly at everything he attempted in his life. First he failed as Argentine medical student. Though he's widely described as a medical doctor by his hagiographers (Anderson, Castaneda, etc.) no record exists of Ernesto Guevara's medical degree. When Cuban-American researcher Enrique Ros inquired of the Rector of the University of Buenos Aires and the head of its Office of Academic Affairs for copies or proof of said document, Ros was variously told that the records had been misplaced or perhaps stolen.

In 1960 Castro appointed Che as Cuba's "Economics Minister." Within months the Cuban peso, a currency historically equal to the U.S. dollar and fully backed by Cuba's gold reserves, was practically worthless. The following year Castro appointed Che as Cuba's Minister of Industries. Within a year a nation that previously had higher per capita income than Austria and Japan, a huge influx of immigrants and the third highest protein consumption in the hemisphere was rationing food, closing factories, and hemorrhaging hundreds of thousands of its most productive citizens from every sector of its society, all who were grateful to leave with only the clothes on their back.

Most observers attribute this to "Communist mismanagement." Che himself eventually confessed to his multiple economic errors and failings. Actually, given the goal of Cuba's rulers since January of 1959 (absolute power,) Castroite Cuba’s economy has always been expertly managed.

The Castros deliberately and methodically wrecked Latin America's premier economy. A Cuban capitalist is a person I won’t be able to control, they reasoned—and continue to reason. Despite all the propaganda from the Castros’ Fake News Media and libertarian agents of influence (on the payroll and off) The Castro Family Fiefdom remains as essentially communist in 2020 as it was in 1965.

Che Guevara seemed to actually believe in the socialist fantasy. When he pronounced in May of 1961 that under his tutelage the Cuban economy would boast an annual growth rate of 10% the imbecile seemed to believe it.

Castro didn't care. He simply knew as a result he'd be running Cuba like his personal ranch, with the (quickly unarmed) Cuban people as his sheep and cattle.

As mentioned, the one genuine accomplishment in Che Guevara’s life was the mass murder of defenseless men and boys. Under his own gun, dozens died. Under his orders, thousands crumpled. At everything else Che Guevara failed abysmally, even comically. In 1965, while planning a military campaign in the Congo against crack mercenaries commanded by a professional soldier who helped defeat Rommel in North Africa, Che confidently allied himself with “soldiers” who used chicken feathers for helmets and stood in the open waving at attacking aircraft because a muganga (witch doctor) had assured them that the magic water he sprinkled over them would make .50 caliber bullets bounce harmlessly off their bodies. Six months later, Che fled Africa, narrowly escaping with his life and with his tail tucked tightly between his legs.

Two years later, during his Bolivian “guerrilla” campaign, Che split his forces, whereupon they got hopelessly lost and bumbled around, half-starved, half-clothed and half-shod, without any contact with each other for six months before being wiped out. They didn’t even have World War II vintage walkie-talkies to communicate and seemed incapable of applying a compass reading to a map. They spent much of the time walking in circles and were usually within a mile of each other. During this blundering, they often engaged in ferocious firefights against each other.

“You hate to laugh at anything associated with Che, who murdered so many,” says Felix Rodriguez, the Cuban-American CIA officer who played a key role in tracking Guevara down in Bolivia. “But when it comes to Che as ‘guerrilla,’ you simply can’t help but guffaw.”

So for many, the question remains: how did such an incurable doofus, sadist and epic idiot attain such iconic status?

For the same reason so many idiots believe the bogus memes about Cuba’s “free and fabulous healthcare!” and that “the Mob ran pre-Castro Cuba!”

The answer is that this psychotic and thoroughly unimposing vagrant named Ernesto Guevara de la Serna y Lynch had the magnificent fortune of linking up with modern history's top press agent, Fidel Castro, who—from The New York Times' Herbert Matthews in 1957, to CBS's Ed Murrow in 1959 and CBS's Dan Rather, to ABC's Barbara Walters and NBC's Andrea Mitchell more recently—always had the Fake News Media anxiously scurrying to his every beck and call and eating out of his hand like trained pigeons.

I don’t know what the fuss is all about. After crushing a cockroach I’d feel the same way.

F che was a murderous, terrorist thug, so, I would say he could be the che of the Middle East... and they are both dead.

Like being compared to a 1960’s racist, murdering thug is a badge of honor...

“F che was a murderous, terrorist thug,..”
Agreed. I cringe when I see his image on tee shirts, proudly displayed by people who don’t know a thing about him.

Suleimani was the Iranian Himmler.

Commander of a huge paramilitary organization that rivals the Army in funding and size.

Me too. I bought a t-shirt with General Pinochet image on it. Much like this one:

His "Mandatory Fun" theme seems to have been inspired by his contractual obligation to come up with a new comedy album by such and such date, whether he enjoyed it or not. Hence the "Mandatory" part.

At any rate, being the genius that he is, he took a step to the left with that theme and made certain parts of show about himself, all dressed up as a South American military dictator.

One of the T-shirts for sale after the event was a... uh, kind of a "Che" shirt, except "Che", in his familiar romantic pose, was morphed with Al... thus Al was ridiculing Che in particular.

Of course the back of the shirt says "Weird Al Yankovic, Mandatory Fun tour, 2015"

Now, this shirt ended up becoming my usual shirt to wear to the shooting range, just because I like to. Once, my wife and I went to an indoor range near our house and there were two guys at the counter as we walked up to face them, an older guy and a younger guy. The younger guy was helping us get checked in and stuff, but the older guy just kinda stood there with a stern look on his face and didn't say anything. So we got checked in, did an about face and walked on into the range area and did our thing for awhile - facing downrange, with our backs facing the counter, visible thru the glass windows between the shooting range and the retail store area and counter.

We walked back out, walked up to the counter to clear our tab and stuff, and the younger guy was still there but the older guy had left.

The young guy just kinda laughed and shook his head.

I still have that shirt. I think I'm gonna wear it to the gym sometime. 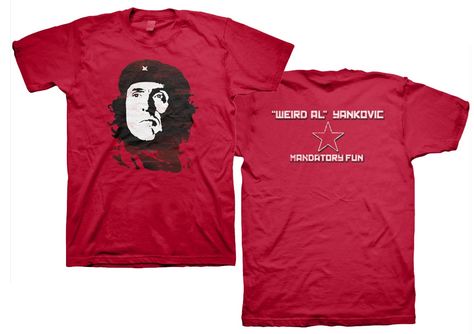 Mine is olive drab. I'm jealous...

LOL - I don’t have the shirt - just had to look for a picture!

Che was every bit as evil.

Martyrs for the unholy alliance.