Republicans with a spine..well I’ll be damned..let’s see if it actually happens..waiting for the commies to scream “HEY BIDEN DID NOTHING WRONG, he was already exonerated” LOL

2 posted on 12/19/2019 11:56:29 AM PST by Sarah Barracuda
[ Post Reply | Private Reply | To 1 | View Replies ]
To: powermill
Still curious WHY obozo didn't support Biden? How's this? Obozo was probably deep in the $ loop on the Ukraine shakedown and knew if Joe went, all this crap would come out & obozo would be sucked in sooner than later. Sooner is upon them & getting "suckier" daily! Love it!!! 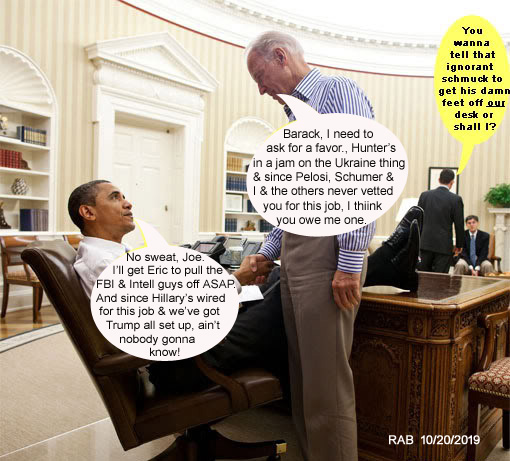 Ya know, what the dems have pulled while the President is busy working for the country... may have backfired on them, giving the GOP.. some at least.. a spine to go on.. and get the dirt that has been there long enough. They go after Trump and just maybe biden and obama will get theirs... sweet justice.

Anger will spur.. and I hope the gop is angry at finding out what those “friends” across the aisle is really capable of. And to have a hard working Trump on board has done something.

Kudlow said Trump has shown them how to deal... well, it’s about time isn’t it.

Question: Does/did Trump have a reason to say that about dingle?
Just when things go his direction, Trump goes and says something that he should not have. Even if it was deserved, he should NOT do that... the media is talking about it.. and does not make him look better. if that was the reason.. still should not have.

Please, Pres Trump... don’t do things that don’t help... they already think you are nasty...
I am forever a Trump supporter.. just wish he’d not do things that the left run on.