RUSH: I have a major dilemma today, folks. By the way, greetings. Rush Limbaugh and three hours of play-by-play of the news is upcoming. Happy to have you here with us. It’s great that you’re here, and it’s great that I’m here. We look forward to it each day. 800-282-2882 if you want to be on the program.

My dilemma is that what I think is the biggest and most important thing, story, whatever, that explains everything else, has become old news. And my dilemma is, do I continue to inform, educate, comment about it, or do I leave it aside in the past and deal with the hot topics of the day which are the result of agenda writing and soap opera scripting by the Washington and New York media. 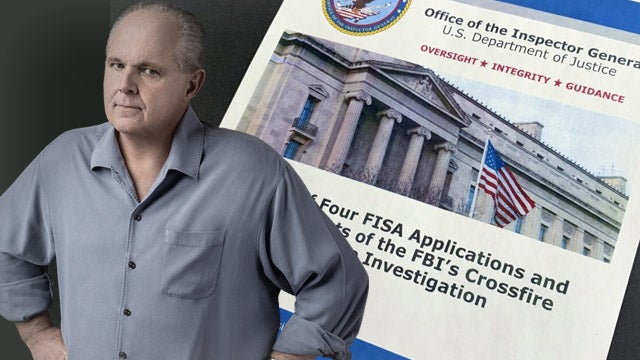 And of course my instinct is to not let go of what we have learned about what started all of this. Because it’s simply outrageous. And I’m talking about the entire so-called investigation by the FBI and the intelligence agencies and, for want of a better term, deep state to try to unseat candidate Trump and then unseat President Trump.

The more I have read – I really took time to go through the IG report. It’s 400 pages, took hours and hours to read this. Folks, it’s simply outrageous, and these interviews with Comey and others on TV over the weekend, they don’t even scratch the surface of how outrageous this was. Now, much of it we know. Much of it I’ve already had imparted to you.

I have here a 17 page, just to illustrate, I have here a 17-page review and commentary on all that happened. And I can pick from any page, I can pick randomly any paragraph and read it to you, and it’s outrageous. There’s not one bit of extraneous material in this 17-page summary. It is all devastating. It is all nearly criminal.

And as I say, if people were to understand how egregious and outrageous and criminal it all was — and maybe many of you already do — then it would render everything happening now as nothing more than a flailing attempt to still make hay out of nothing.

So that’s my dilemma. And I’m gonna try to mix the two today because, you know, being on the cutting edge of societal evolution. Plus going back in time, it’s always risky because you don’t want to cause reactions in the audience where people, “Come on, Rush, that’s old news. That’s old news. Been there, done that.” This should never be old news, what this was.

I’ll give you an example of something that is relevant to the present and the future, and that is if you’re going to watch mainstream media, there are a number of tricks that are being employed. They’re not new, but I just want to properly characterize it. If you take a look at CNN or MSNBC you will find that there are fewer and fewer actual journalists who are by virtue of their knowledge and their training and their experience who are, quote, unquote, experts in whatever it is they cover.

The same thing with James Clapper and everything else that they have brought forth from the FBI, the CIA, the DIA. They get all of these retired former Obama people on and then they position them as independent experts. As one reporter said, it would be no different than if the media went out and got former retired automobile company executives as official commentators and reporters on the state of the auto industry. Or imagine if CNN used former energy company CEOs as experts on climate change, which is what they’re doing here.

Clapper and Brennan have no business, other than this is a free country, they have no business being presented as independent experts in the intelligence community when in fact they remain advocates of the Obama administration and enemies of Trump. And yet they are presented as impartial. That’s the authority that is given to them by virtue of being hired. And they are treated with great — and every one of these people lied.

For example, I could show you tweet after tweet after tweet or audio clip after audio clip of every one of these people saying that the Steele dossier, “Oh, no, that wasn’t part of our FISA application.” It was all that they ever had. The Steele dossier was it in toto. There never was anything else. They had to lie and fake emails and make things up, and they lied to the FISA court. 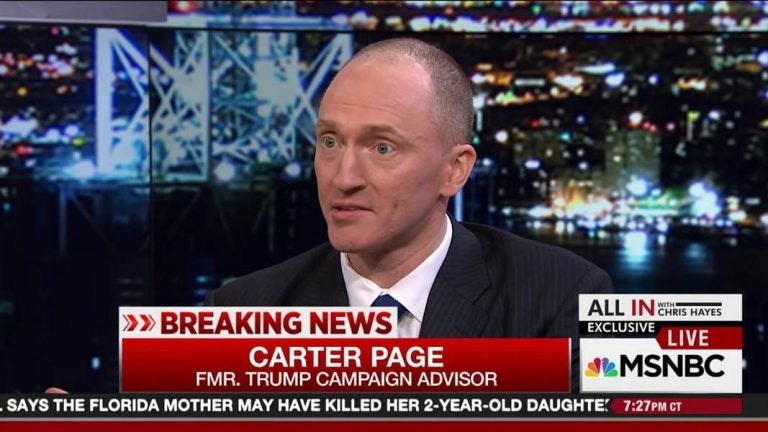 It is genuinely outrageous what has been done here. Carter Page was lied about repeatedly to the FISA court, portrayed as a Russian spy when in fact he was a CIA agent working for America, interacting. And even after the FBI learned that Carter Page was a CIA asset working for America, they continued to portray him as somebody that they needed to spy on to the FISA court in the Trump campaign.

The way that this is IG report’s been presented — no bias, no intentional bias — that is such a blanket cover that doesn’t even get close to describing what went on. It is the greatest political scandal in our history. It is the most outrageous. It’s not just the greatest political scandal of our lifetimes, it’s of American history. And there really should be people in jail for this.

All you have to do if you’re a journalist, if you’re a serious journalist, read the IG report, you should be so embarrassed, you ought not be able to show your face on TV. But there is no embarrassment, there’s no apology.

RUSH: I gather a lot of people are gonna want to talk about Comey, which we’ll get to. But none of this — and this is easy for me to say — none of this about Comey is shocking or surprising. I have thought Comey was slimy since that July 5th press conference exonerating Hillary Clinton. I remember a lot of people thought that Comey was on our side that day. He couldn’t prosecute her, but instead listed all of her crimes and then said no reasonable prosecutor would prosecute because she didn’t intend to break the law, blah, blah, blah.

That’s awfully fishy, especially when all of this got going, all this Russia stuff, it was obvious that Comey had developed megalomania and considered himself Captain America and was part of this crowd that thought that Trump was a reprobate, didn’t deserve to live in Washington, D.C., much less be president, was single-handedly gonna take him out.

Well, if Rush is outraged, then prep the firing squads. /s

Everyones angry, but no one does anything about it.

Exactly. No one does anything.
The dens get away with it

‘Exactly. No one does anything.
The dens get away with it!’

We’ve all become sissified and complacent - and therefore will become jews and slaves to the slaughter!!!!!!!!!!!!!!

This isn’t the first time Hillary compromised the FBI.

This isn’t the first time Hillary was central to conniving false charges to get someone innocent out of the way.

The email server scandal wasn’t the first time where Hillary was conclusively caught committing crimes where she wasn’t prosecuted because they decided they couldn’t prove she was competent.

Hillary and the Dems faked a primary.

It isn’t the first time for either Hillary or Obama to compromise an election using the power of government investigation.

Why does anyone expect they’d stopped?