* China's National Reform and Development Commission has completed its initial assessments, which will be used to label firms excellent, good, fair or poor.

* Foreign firms fear they will be targeted in the event of a trade dispute or to give domestic firms a commercial advantage.

China is moving forward rapidly its plans for a controversial social credit rating system that will include 33 million companies, raising fears of reprisals among foreign firms as Beijing seeks to extend its control over the business environment in the country.

The National Development and Reform Commission (NDRC) is pushing ahead with social credit-based supervision of all commercial entities from large firms to small, independently owned and operated business, prompting complaints over corporate privacy and heavy handed government intervention.

Advocates argue that it will help create better corporate citizens, but critics say that it will give greater latitude to local officials to target certain firms.

In a circular released on Monday, the NDRC said it had completed its initial assessment of the credit results, which will now be sent back to local authorities for further checks and updates.

Firms will be labelled as having excellent, good, fair or a poor credit rating, with the initial assessment used as “basic proof” to allow the government to conduct varying degrees of supervision. For any business deemed to have a poor credit history, the management will be called in by local officials for a detailed review, which will include plans to correct the problems.

According to the assessment of the coal sector published in April, only 98 of more than 19,000 firms were rated as excellent, while 1,868 were labelled as having poor social credit ratings. Some 204 natural gas suppliers were rated as poor after they appeared on the lists of the Supreme Court or the State Administration of Market Regulation for violating laws or regulations.

The NDRC did not elaborate on the business credit rating methodology, but said that it will solicit public feedback before the end of October.

It is generally believed that ALL the China-registered firms and individuals will be eventually covered when the system is officially launched at the end of 2020, although the NDRC did not specify how many foreign or private firms were included in the current assessment. The social credit system is highly controversial as the current monthly release of the social credit blacklist has barred tens of thousands of individuals from taking trips on high-speed trains or planes. T

The new system has also created major discomfort for foreign firms, which are concerned that it could be used as a weapon during international trade disputes or to give domestic firms an advantage.

These worries have intensified given that China is now compiling an “unreliable entity” list to sanction foreign firms that hurt Chinese companies for non-commercial reasons. This is in response to sanctions from the United States against Chinese telecommunications equipment giant Huawei, with courier service FedEx under investigation for a case in which a gun was found in a parcel.

In a report published late last month, the European Chamber of Commerce in China warned that data collected under the corporate social credit system could be weaponised to target foreign firms.

“Is it possible to use it as such? Sure. It’s a very powerful regulatory tool. If the government decides to do so, it can also be used in that manner,” said Björn Conrad, chief executive of Sinolytics, an independent research firm that worked on the report.

Chamber president Jorg Wuttke said there were concerns that the submission of sensitive data could put firms’ intellectual property at risk – a long-standing grievance in China by both US and European businesses.

“For example, particularly with banks, insurance and health care companies, to what extent can you disclose information to the local government?” he said.

Lian Weiliang, deputy chairman of the NDRC, said that the assessment would not used directly for punishment. Instead, punishments would be meted out in accordance with joint memorandums by different government agencies that follow a “strict procedure”.

There are more than 50 such joint memorandums that stipulate both incentives and punishments in different sectors, Lian confirmed.

“All the existing credit incentive and punishment measures listed in the memorandums are based on laws and regulations,” he said.

“For severe violations, especially those endangering life and property, harsh punishment will be adopted, such as a temporary or even permanent ban on market entry.”

Chen Hongwan, director general of the NDRC’s fiscal and financial affairs department, said the social credit system was intended to profile the status of enterprises to facilitate government supervision.

“Internet and big data technology will be used effectively to aggregate all kinds of information. It will set up a risk warning mechanism to prevent the emergence of cross-sector and cross-region risks,” he was quoted as saying in the August issue of China Credit magazine. 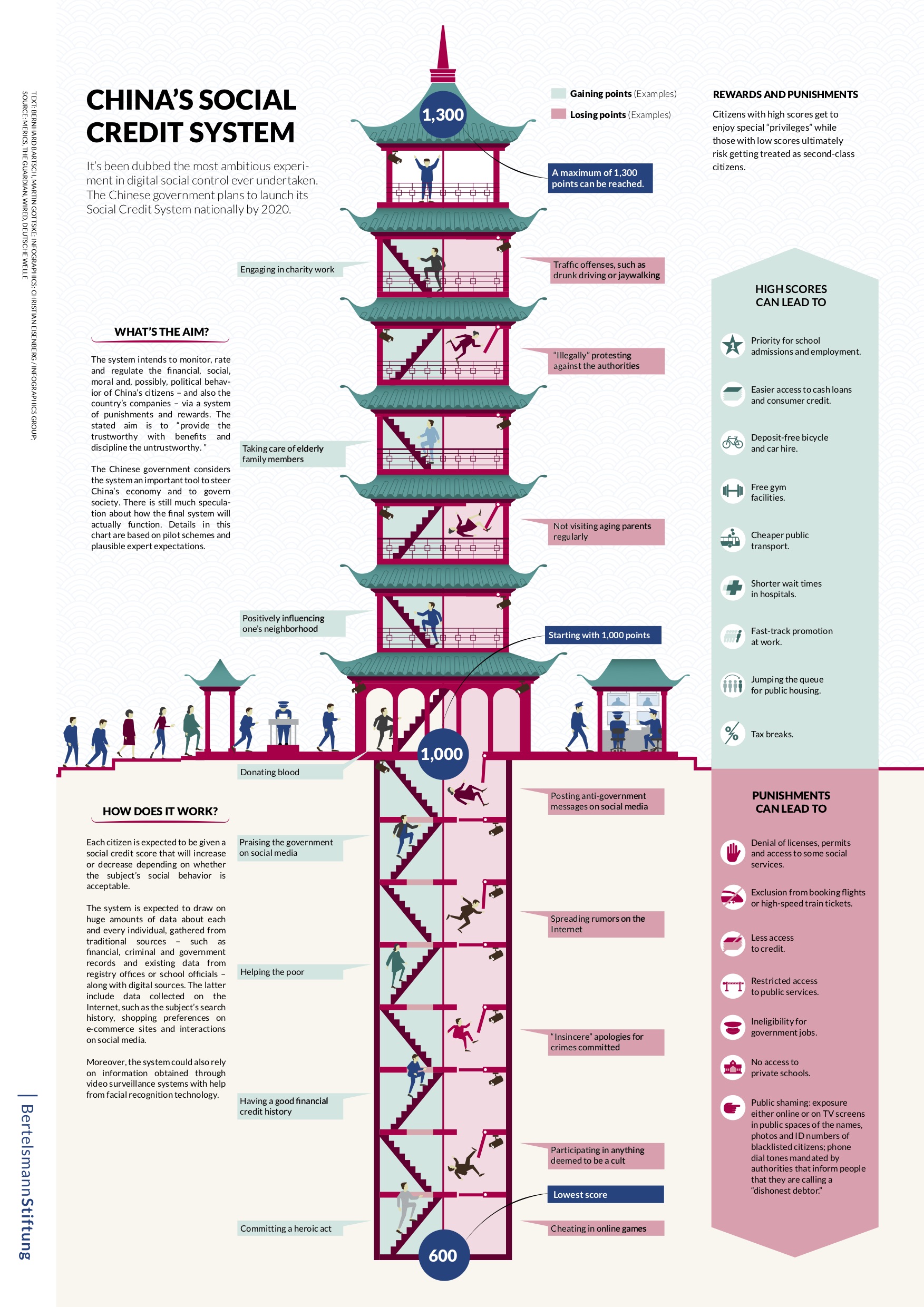 China leads, progressives follow.
After all, when have they had an original idea?

You want to know what the “Mark of the Beast” is going to look like?

China's Docile Citizenry Seems to be accepting of this Social Credit System.

all i can think of when i read this article is that we need banks that support 2a, and a rating system for banks so that we may transfer our accounts accordingly.

Welcome to our future.

(and Michigan will … what? Continue to decay???)