On a recent trip to the beach in Delaware with my family, my wife pointed out something I didn’t realize I’d noticed too: just how unhinged liberals are. I’m not talking about the clowns you see on TV, it’s hard not to notice how far past the edge of sane they’ve gone. I’m talking about otherwise seemingly normal people infected by what cable news has done to them.

It’s easy to dismiss CNN and MSNBC as fringe outfits preaching to the progressive choir because their ratings are an embarrassment compared to Fox News. But it’s important to remember that the media is much larger than 2 substandard left-wing activist cable networks. While Fox dominates cable news, it is dwarfed by everything else. And it’s what’s going on in everything else that is bleeding into everywhere else.

Living inside the Beltway of Washington, DC, it’s good to get outside that bubble and visit “real America” as often as possible. It’s not only healthy to relax every once in a while, it’s necessary to see what the people who pay the bills are talking about and important to note the differences between those topics and what people inside the bubble are talking about.

On that trip to the ocean, we’d gone to dinner on the boardwalk with the kids at dusk. Nice place. By the time we’d finished, it was after sunset and were walking back to our hotel. The boardwalk was still a little crowded, even for a Monday night. As we were approaching our street with the 11-month-old in the stroller and the 2-year-old on my shoulders, a pair of couples came walking up behind us, talking as couples do. But one of the guys was loud.

They had to be in their mid-50s and didn’t seem drunk, at least by how they were all able to walk a straight line and weren’t slurring their speech. But the guy who was loud was angry too. “These f*#king Nazi rallies on TV, I f*#king hate these people,” he bellowed.

After a few more f-bombs and references to President Trump and Republicans, he then called just about everyone a racist. “They had all these f*#king crackers in Georgia f*#king everything up,” not noting the irony of his own middle-aged whiteness.

I thought about doing what I’d always done in situations like that – saying something snarky loud enough for him to hear – even something as simple as pointing out how he needs to diversify his obscenity portfolio – but with a child wrapped around my head, I thought better of it. It’s not a good look to get arrested with your kids. So I shot him an eye-rolling, head-shaking look and we turned the corner.

Immediately after, my wife asked me something that hadn’t occurred to me before, but was telling, “Have you ever randomly overheard a Trump supporter angrily talking about any Democrat?”

I haven’t. Not just a Trump supporter, but I don’t recall ever overhearing any Republican heatedly attacking a liberal politician or policy. My friends and I have done it, certainly, but either at parties or some other private setting. Never just walking around or sitting in a restaurant.

Yet Democrats are so filled with rage that it’s not uncommon, even in the real world outside the beltway, even at the beach. It’s not just my experience, people have been physically attacked for wearing a “Make America Great Again” hat. And it’s not just Trump supporters, people deemed to be insufficiently “woke” have come under assault from coast to coast.

Politics has always evoked emotional responses from people, but rarely has it brought on psychosis. The election of Donald Trump crossed the Rubicon for the activist left, from the towers of power to the boardwalk at the beach. Many are now acting on instinct, almost a Pavlovian response, a “Trump Tourette Syndrome” that causes a loss of decency and self-awareness.

After attacking any and every conservative they possibly could over old speeches, writings, and tweets, The New York Times published a piece decrying Trump supporters holding journalists to the same standards. They actually wrote, in a “news” story, “But using journalistic techniques to target journalists and news organizations as retribution for — or as a warning not to pursue — coverage critical of the president is fundamentally different from the well-established role of the news media in scrutinizing people in positions of power.”

It’s good to get out of Washington and visit America. It’s just a shame that liberals are bringing Washington to the rest of the country.

TOPICS: Culture/Society; Editorial
KEYWORDS: leftwingmedia; media; presidenttrump
1 posted on 08/27/2019 2:06:16 AM PDT by Kaslin
[ Post Reply | Private Reply | View Replies]
To: Kaslin
The mind must be warped out of shape to accept Leftism/Liberalism. 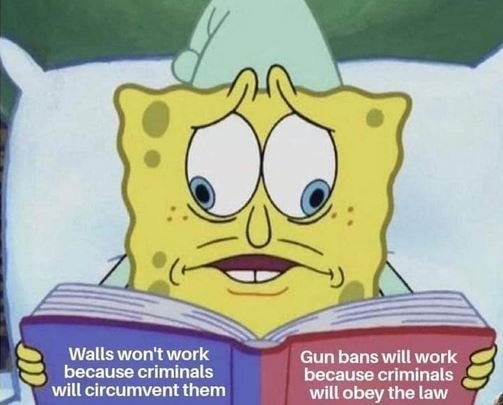 There is a Truth behind the Brown Shirt Media that can only be perceived through Gnostic Wisdom.

You forgot the Washington Compost

Yet Democrats are so filled with rage that it’s not uncommon ......... Hence the reason they have no problems with things like massive voter fraud, being against any form of Voter ID, massive & unchecked immigration to inflate their ranks, and will scream from any rooftop about suppression of ??????(you name it). As long as they get what they want, Control, that is all that matters.

They worry about the details later. Two of those glaring details are the wage gap and what I’ll call, the neighborhood gap. Where they can segregate themselves into their lily, white, liberal, hipster, “upscale”, urban neighborhoods where the only times their pawns/useful idiots are allowed in, is when someone needs to clean the house, do the laundry, cut the grass, paint the house or work in the kitchen/bus tables in the latest trendy bistro. Other than that, they have to leave, go back to their favela’s that they created out of what was once, a nice middle class neighborhood and make sure they vote for whoever they’re told to vote for.

The mental health of the TDS suffering leftist is being fed by the MSM. There is a portion of society that has been brainwashed for decades in our school systems and colleges and universities that haven’t ever faced actual challenges, and now are fighting the causes that they have been told are the challenge of their generation. Today it is fake racism and global warming or climate change or whatever. The fact that they haven’t had any real challenges in their lives I feel has made them so incapable of dealing with not winning an election. They have been programmed to act out, to “fight” or whatever they teach the mush minded children these days. They follow like drones into the mindset of crazy people. They become crazy people. They think this is normal. There is no fix for this.

“It’s just a shame that liberals are bringing Washington to the rest of the country.”

Lol, welcome to my world. I was born and raised here and can’t wait to retire and leave for not too far where I know the lib imports of the last 25 years or so would never go.

ALL DIMs/LIBs are certifiable lunatics. It is only a matter of degree of their mental illness. Avoid them.

10 posted on 08/27/2019 5:28:59 AM PDT by hal ogen (First Amendment or Reeducation Camp???)
[ Post Reply | Private Reply | To 6 | View Replies]
To: Kaslin
Many are now acting on instinct, almost a Pavlovian response, a “Trump Tourette Syndrome” that causes a loss of decency and self-awareness.

Or the mother of all propaganda organs, the Associated Press.

Excellent but he rarely writes a bad piece....

We used to say this as a joke but it has now come true. I don't know of anyone - no matter how meek or bold - who hasn't encountered the unhinged leftie and has a tale to tell of it.

Like most FReepers I am more outspoken with my politics but I still know about time and place. Lefties do not. I'm sitting with my brothers having breakfast when the two couples at the next table begin the "F Trump" nonsense at a volume level that was intentionally obnoxious. We let it go for a few minutes and then turn to them and ask them to keep it down (notice we're not objecting to the content, only the volume). Their response is to personalize the assault, "What, are you one of those Trump Nazi's?!"

Mind you, we're all (at both tables) at least 60 years old. And should know better about public conduct.

"Yes, as a matter of fact we are" my brother replies. "And if you have any sense at all you'll shut your f-ing mouth, finish your meal, and get the F outta here"

They went to management (personal friends of ours) to complain and were reminded who had started the incident. Disgusted at not getting their way, they insulted the manager and left in a huff.

There are a thousand stories in the naked TDS city - this has been one of them ;'}

Definitely should be on the list. There’s so many....

I actually saw a preschool with some form of that name.

In an urban area. I would drive past it every day on my way to work. It’s no longer around, BTW.