The Senate Finance Committee is probing the Obama administration’s 2015 decision to approve the sale of a U.S. company with insight into “military applications” to the Chinese government and an investment firm run by former Vice President Joe Biden’s youngest son, Hunter Biden.

Sen. Chuck Grassley (R-IA), the committee’s chairman, sent a letter to the Treasury Secretary Steve Mnuchin on Thursday requesting documents relating to the sale of Henniges, a Michigan-based automotive company, to Aviation Industry Corporation of China (AVIC) and Bohai Harvest RST (BHR). The latter was formed in 2013 by a merger between a subsidiary of the Bank of China and Rosemont Seneca, a firm started by Hunter Biden and Chris Heinz, the stepson of former Secretary of State John Kerry.

Since AVIC was a subsidiary of the Chinese government and Henniges, the producer of “dual-use” anti-vibration technology with military application, the deal required approval from the Obama administration’s Committee on Foreign Investment in the United States (CFIUS). The panel — made up of representatives from 16 different federal bodies, including the departments of State, Treasury, and Defense — is required to review any transaction that could lead to a foreign person gaining control of an American business.

In question is whether CIFUS was influenced by Obama administration officials, most notedly Joe Biden and John Kerry, who had an interest in seeing the deal move forward.

“The direct involvement of Mr. Hunter Biden and Mr. Heinz in the acquisition of Henniges by the Chinese government creates a potential conflict of interest,” Grassley wrote.

The senator noted in his letter that AVIC’s bid for Henniges should have immediately set off alarm bells in the Obama White House. In 2007, AVIC “reportedly involved in stealing sensitive data regarding the Joint Strike Fighter program,” which it later “reportedly.. 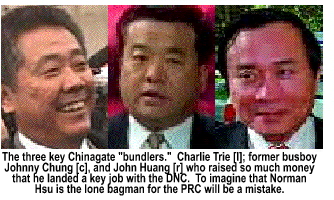 Sorry but what’s the point of these millions of dollars for investigations that accomplish absolutely nothing? Even if they found Biden guilty, nothin ever happens. Until there’s real teeth in justice, in the same way when we the taxpayers get busted, these jackoff politicians will continue to rob us blind.

Side Bar: It appears that POTUS, Donald J. Trump will get more Iowa State Fair Corn Kernel Poll votes then any 2020 Democrat Candidate. Does anyone have a current tally of the “corn kernel poll”? The Democrat “Fake News” Media is avoiding reporting, the current results. Iowa fair attendees have little use for the bevy of incompetent Democrat Candidates....Democrat supporter crowd attendance has been dismal to say the least. Iowa State Fair was not kind to the current Democrat Party 2020 POTUS candidates as in previous years...period!!! Why? Democrats are simply “BORING”!!!

It will probably be reported as more votes going to a DEM (in total) than Trump.

EXCERPT--Peter Schweizer in his new book, “Secret Empires: How the American Political Class Hides Corruption and Enriches Family and Friends,” details a number of ethical violations on both sides of the political aisle. One example: the little-noticed private equity firm run by the sons of Democrats Joe Biden and John Kerry, as detailed in this exclusive first excerpt.

The two men became close while serving for several decades together in the US Senate. The two “often talked on matters of foreign policy,” says Jules Witcover in his Biden biography.So their sons going into business together in June 2009 was not exactly a bolt out of the blue. But with whom their sons cut lucrative deals while the elder two were steering the ship of state is more of a surprise.

What Hunter Biden, the son of America’s vice president, and Christopher Heinz, the stepson of the chairman of the Senate Committee on Foreign Relations (later to be secretary of state), were creating was an international private equity firm. It was anchored by the multi-million Heinz family alternative investment fund, Rosemont Capital. The new firm would be populated by political loyalists and positioned to strike profitable deals overseas with foreign governments and officials with whom the US government was negotiating.

Hunter Biden, Vice President Joe Biden’s youngest son, had gone through a series of jobs since graduating from Yale Law School in 1996, including the hedge-fund business. By the summer of 2009, the 39-year-old Hunter joined forces with the son of another powerful figure in American politics, Chris Heinz. Senator John Heinz of Pennsylvania had tragically died in a 1991 airplane crash when Chris was 18. Chris, his brothers, and his mother inherited a large chunk of the family’s vast ketchup fortune, including a network of investment funds and a Pennsylvania estate, among other properties. In May 1995, his mother, Teresa, married Senator John Kerry of Massachusetts. That same year, Chris graduated from Yale, and then went on to get his MBA from Harvard Business School.

Joining them in the Rosemont venture was Devon Archer, a longtime Heinz and Kerry friend. The three friends established a series of related LLCs. The trunk of the tree was Rosemont Capital, the alternative investment fund of the Heinz Family Office. Rosemont Farm is the name of the Heinz family’s 90-acre estate outside Fox Chapel, Pennsylvania. The small fund grew quickly. According to an email revealed as part of a Securities and Exchange Commission investigation, Rosemont described themselves as “a $2.4 billion private equity firm co-owned by Hunter Biden and Chris Heinz,” with Devon Archer as “Managing Partner.”The partners attached several branches to the Rosemont Capital trunk, including Rosemont Seneca Partners, LLC, Rosemont Seneca Technology Partners, and Rosemont Realty. Of the various deals in which these Rosemont entities were involved, one of the largest and most troubling concerns was Rosemont Seneca Partners.

Rather than set up shop in New York City, the financial capital of the world, Rosemont Seneca leased space in Washington, DC. They occupied an all-brick building on Wisconsin Avenue, the main thoroughfare of exclusive Georgetown. Their offices would be less than a mile from John and Teresa Kerry’s 23-room Georgetown mansion, and just two miles from both Joe Biden’s office in the White House and his residence at the Naval Observatory. In short, the Chinese government was literally funding a business that it co-owned along with the sons of two of America’s most powerful decision makers.

10 posted on 08/17/2019 10:09:43 AM PDT by Jane Austen (Neo-cons are liberal Democrats who love illegal aliens and war.)
[ Post Reply | Private Reply | To 9 | View Replies]
To: Liz
Texas Republican Cong Louie Gohmert, a former judge, and multiple anonymous sources, have alleged that Secy Clinton’s private server,
that she used for official govt business, was compromised by a foreign hostile power, and was surreptitiously receiving Clinton’s incoming and outgoing emails.

That would be China, using a company operating in northern Virginia, The Daily Caller reported, citing a former intelligence officer with expertise in cybersecurity issues and a government staff official—both anonymous.


The Washington Post / By Laura Vozzella and Simon Denyer / September 16, 2016

$2 million Chinese Donor to Clinton Foundation, caught up in Chinese cash-for-votes scandal---surfaces in Virginia Wang Wenliang, a Chinese billionaire and donor to the Clinton Foundation and Virginia Gov. Terry McAuliffe, has been expelled from China’s top legislature after being caught up in a widespread cash-for-votes scheme. On Tuesday, China’s national legislature expelled 45 of its nearly 2,900 members, all from the northeastern province of Liaoning, in a huge vote-buying scandal. The move was part of an investigation into corruption in Liaoning and a much larger national anti-corruption campaign launched by President Xi Jinping. Wang, who made his fortune in construction and running a strategic port near the North Korean border, also has been a big donor to New York University, Harvard University and the Center for Strategic and International Studies in Washington. Wang’s $2 million donation to the Clinton Foundation in 2013 made waves when it was disclosed last year because of his ties to the Chinese government. More recently, his name surfaced amid news that McAuliffe (D) was the subject of an FBI investigation.

McAuliffe expressed confidence in May that Wang, who gave a combined $120,000 to his 2013 gubernatorial campaign and 2014 inauguration, was a “legitimate donor.” [McAuliffe in ‘shock’ over FBI investigation of campaign money, personal finances] A spokesman for Wang said his ouster was the result of a political “purge” carried out on behalf of Xi. “They get rid of people who are not part of his team,” spokesman Sig Rogich said. He said Wang and the others ousted had only “lobbied decision-makers” with meals and token gifts. “He wined and dined them and gave them a gift,” Rogich said. “It’s not like they gave them cash.” On Friday, McAuliffe’s attorney, James W. Cooper, said the governor “knows nothing about Mr. Wang and his legal situation in China.” Spokesmen for the Clinton campaign and the Clinton Foundation did not respond to requests for comment. Wang’s construction conglomerate, Rilin Enterprises, controls the Port of Dandong and processes significant volumes of soybeans shipped out of Virginia. He was courted in 2011 by Gov. Robert F. McDonnell (R), who encouraged Wang’s firm to buy 100,000 metric tons of soybeans from Maryland-based Perdue Agribusiness and ship them from Chesapeake, Va., to China.

Wang’s company also helped build the new Chinese Embassy in Washington, assembling and overseeing a team of artisans who would be loyal to both the Chinese government and the principles of feng shui. “There’s a lot of security involved,” Rogich said. “They’re also artistically knowledgeable about what the Chinese want. There’s a lot of feng shui that goes into this, evidently — depictions of the four seasons. . . . Certain colors are not allowed.” Wang’s $2 million pledge to the Clinton Foundation drew attention last year, first from CBS News and then other outlets, because of his connections to the Chinese government — both as a member of the National People’s Congress and as a contractor entrusted to help build China’s embassies around the world.

Wang’s political donations to McAuliffe reflect sizable overlap in Clinton and McAuliffe donors. Critics say the pattern suggests contributions to McAuliffe, a close friend of Bill and Hillary Clinton’s, are intended to curry favor with a former president and an aspiring one. McAuliffe supporters say the overlap is the natural outgrowth of personal and political bonds the governor has forged over a long career as a Clinton fundraiser. LINK [Scores of Clinton donors pumped millions into McAuliffe coffers] --SNIP-- more at source Ex-President Bill Clinton (exploiting the presidency) panhandles for foundation donations from the Chinese. Hillary as the US president is the carrot-on-the-stick to get money

Clinton told a Chinese audience that a female president would be good for the United States. Clinton was in China to meet with the country’s president and to promote the "Clinton Foundation."