In Southeast Asia's only landlocked country, the Mekong River is a lifeline. From a slow boat heading up the river in Laos, you'll see fishermen working in their boats, riverside farms where bananas grow, and domesticated buffalo lazing. Occasionally a ferry chugs by. From time to time, steps leading to a riverside village become visible on the banks through the foliage. The wind is swift, and the brown fresh water laps up onto the side of the boat.

Just over 9 miles north of Luang Prabang, a startling aberration appears: five giant concrete pylons rising out of the water.

Red cranes top each of the pylons. A bridge is being built here. On either bank, the row of pylons continues until it almost hits the mountainsides, with scaffolding and other heavy construction equipment scattered below.

When it's finished, the bridge will be part of a new China-Laos railway. Its planned 250-plus miles of track are meant to connect China's southern Yunnan province with Laos' capital, Vientiane.

Laotian officials have promised the high-speed railway, slated to open in 2021, will be good for the country.

"Once completed, the railway will benefit Lao people of all ethnic groups, facilitate and reduce costs of transportation, stimulate the development of agricultural and industrial sectors, tourism, investment and trade, as well as generate income for Lao people and the country," Lao Minister of Public Works and Transport Bouchanh Sinthavong said during the groundbreaking ceremony outside Luang Prabang in 2016.

The railway is part of China's Belt and Road Initiative — a $1.3 trillion project that looks to establish a vast network of investment and infrastructure spanning Asia, Europe and Africa.

But for many Laotian people, the benefits aren't yet clear.

The risk of debt distress

The railway is part of China's Belt and Road Initiative — a $1.3 trillion project that looks to establish a vast network of investment and infrastructure spanning Asia, Europe and Africa.

Brian Eyler, Southeast Asia program director at the Stimson Center in Washington, D.C., describes the plan as a "grand vision" that involves China building bridges, railways, ports, highways and airports all over the world.

"Not necessarily to link China to the rest of the world," he explains. "But to create channels to bring natural resources and commercial inputs back to China so that China's economy can keep growing."

As a direct neighbor to China with ample access to the critical Mekong River, Laos is seen as a "linking country," Eyler says. The China-Laos railway is part of a line that will eventually extend from Kunming, the Yunnan provincial capital, through Malaysia and all the way south to Singapore.

It's an expensive project for one of Southeast Asia's poorest countries. According to the World Bank, while Laos' economy has grown consistently over the past decade, the country's GDP was still only about $16 billion in 2017. The International Monetary Fund ranked Laos 36th out of 42 Asian countries in 2018.

Of the almost $6 billion cost for the China-Laos railway, the Chinese government will pay 70 percent. Laos will finance the remaining 30 percent with loans from Chinese financial institutions.

Eyler says China is a new power player in Laos, whose government most likely found this influx of cash for much needed infrastructure projects attractive. But many wonder if the Laotian government has the ability to pay back such large loans.

"And it's not just the railway's debt that's of concern, but it's the accumulating mass of debt related to Chinese projects in Laos that have put the country very much on alert for ... overleveraged debt," Eyler says.

Concerns about debt are not unique to Laos. Many experts have expressed misgivings over how China is financing large infrastructure projects in developing nations. A 2018 report by the Center for Global Development identified eight countries, including Laos, among 68 potential Belt and Road Initiative borrowers as being "at particular risk of debt distress."

A Vientiane resident is not convinced. She does not want NPR to use her name for fear that giving an interview to a journalist will result in retribution from the Laotian government.

The Chinese government has claimed that the rail project would create thousands of jobs for local people, but many Laotians say they don't know anyone who has been employed.

Her concern about the railway: "Because we borrow money from the Chinese government to build this railway and how much the Lao people have to owe, and pay back. The debt," she says. "So I'm not quite sure about the benefits."

As Laos is a tightly controlled communist state, there likely isn't much dialogue between the Laotian government and the public, Eyler notes. The benefits of the railway to the Laotian people haven't been well-articulated, he says.

Just seeing the way in which the railway is being constructed has given residents pause. Despite the Chinese government's claiming that the project would create thousands of jobs for local people, many Laotians say they don't know anyone who has been employed.

"All the construction work was handed off to China Railway Group, and Chinese engineers and laborers have descended on [Laos] in droves. ... Not even the Laotian government is clear on the exact number of Chinese workers in the country," the Nikkei Asian Review reported in 2017.

As a direct neighbor with ample access to the critical Mekong River, China sees Laos as a vital link. The China-Laos railway is part of a line that will eventually extend from Kunming, the Yunnan provincial capital, south to Singapore.

Chinese state-run media have published various articles claiming the railway is changing local lives for the better. But on the ground, residents have told journalists that thousands were ordered off their land to make way for the railway and aren't being compensated as promised.

Some people living along the path of the new railway see its completion as tantamount to a Chinese invasion.

In Luang Prabang, a man who did not want to use his name for fear of government retribution says he understands why people would like a new train. It's faster, cheaper and makes traveling easier.

"But I worry that when the trains are completed, there will be many, many Chinese [moving] in from China to live in Laos and they will take the job[s] from local people," he says.

He says even the promise of more tourists coming into Luang Prabang isn't necessarily appealing. According to the local tourism office, the number of visitors to Luang Prabang in 2000 was just under 102,000. In 2018, more than 755,000 tourists came to the city — an increase of more than 600 percent. And in recent years, the tourists have overwhelmingly been Chinese. But Chinese tourists rely on Chinese-run tour groups, stay in Chinese-owned hotels and eat at Chinese-owned restaurants, the man says.

"All the money go back to China, not for Laos people," he says.

Some say they wish the money for the railway could be used to fix their country's crumbling roads and schools. Others are deeply concerned about the potential impact of the new railway on Laos' ecosystem as it cuts through the country's dwindling forests, tunnels through its mountains and disrupts the landscape of the Mekong River.

Conservationists working to rehabilitate Laos' critically low elephant population — just 400 in the wild — are worried that these animals won't survive more habitat fragmentation and disruption from such large infrastructure projects.

Both the Luong Prabang resident and the Vientiane resident say many others in their communities share their misgivings about the railway.

"Zero of my friend[s] agree with it," says the Vientiane resident. "However, we cannot go against because it's already been decided by the top people and we just have to accept." 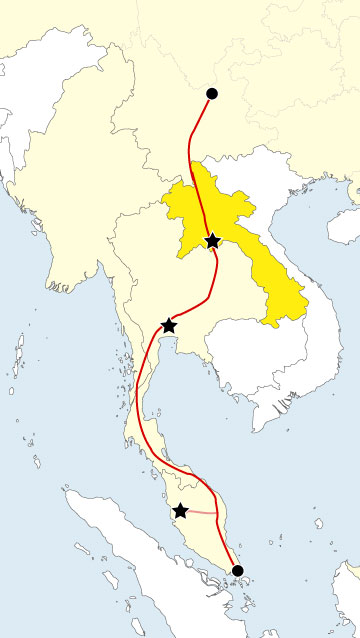 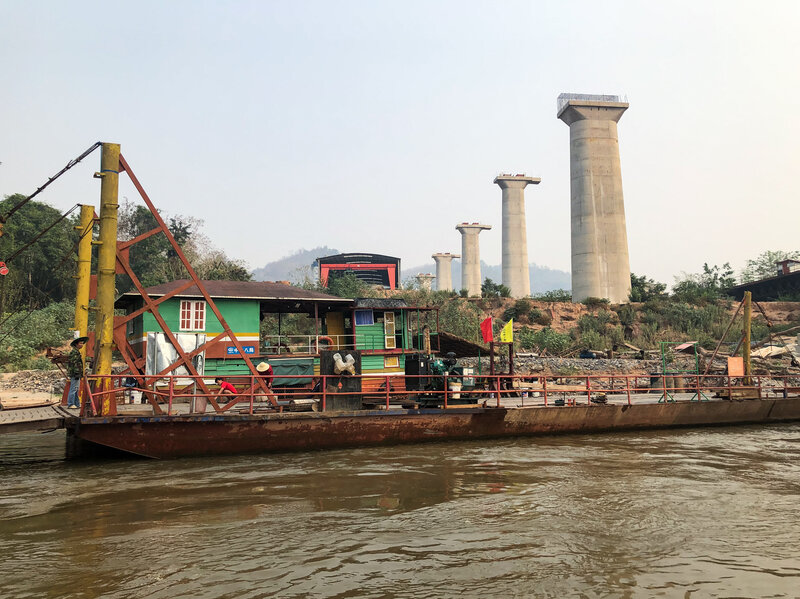 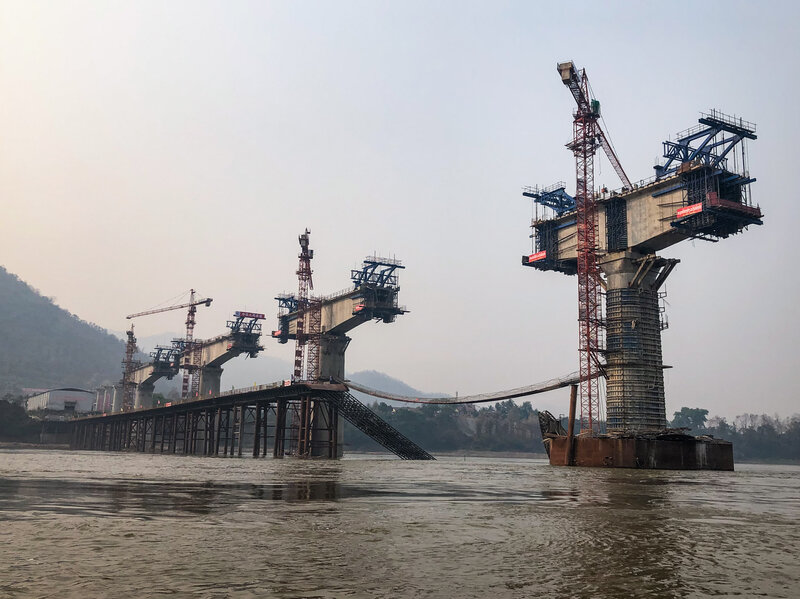 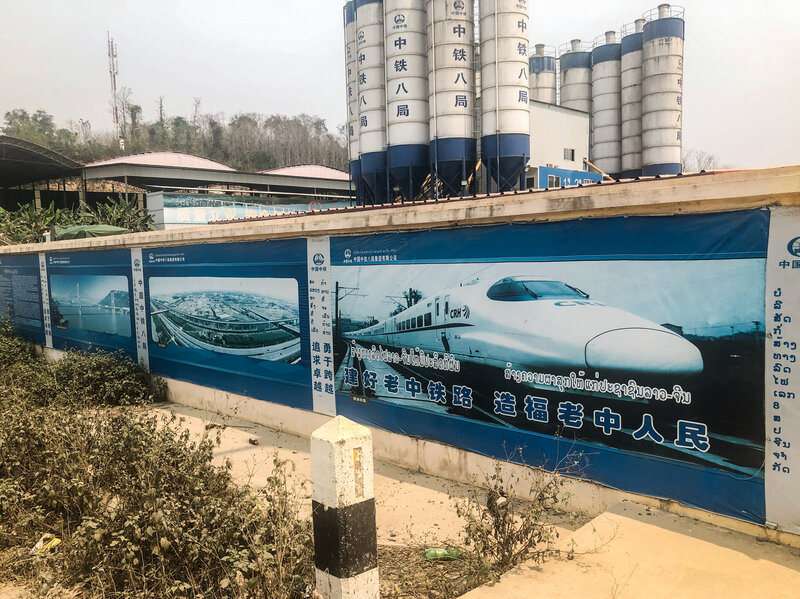 Meanwhile, the high-speed rail in Mexifornia hasn’t driven one spike after ten years.

That is how they can make money from the foreign construction workers.

Some how I just think the economics of Chinese expansion will benefit mostly China and a few highly placed crooks in the surrounding countries and most everyone else will be left out in the rain.

Yep! Somehow that seems familiar...
Many, many Chinese migrant invaders [moving] in from China central America and the middle East to live in Laos the USA and they will take the job[s] and tax monies from local people citizens..."

So much better to invade you, my lovelies!

all the way to kuala lumpur and singapore?!

My folks and I came very close to moving to Laos in 1960.

“Not necessarily to link China to the rest of the world,” he explains. “But to create channels to bring natural resources and commercial inputs back to China so that China’s economy can keep growing.”

Well, that and moving tanks by barge is an iffy proposition
and slow, very slow.

Dad was a civil engineer/dept of the army civilian. He was to build a paper mill to produce copy paper for the growing American presence in SE Asia.

A hart attack ended our relocation plans. Just as well since the Lao Reds were rounding up westerners a year later.