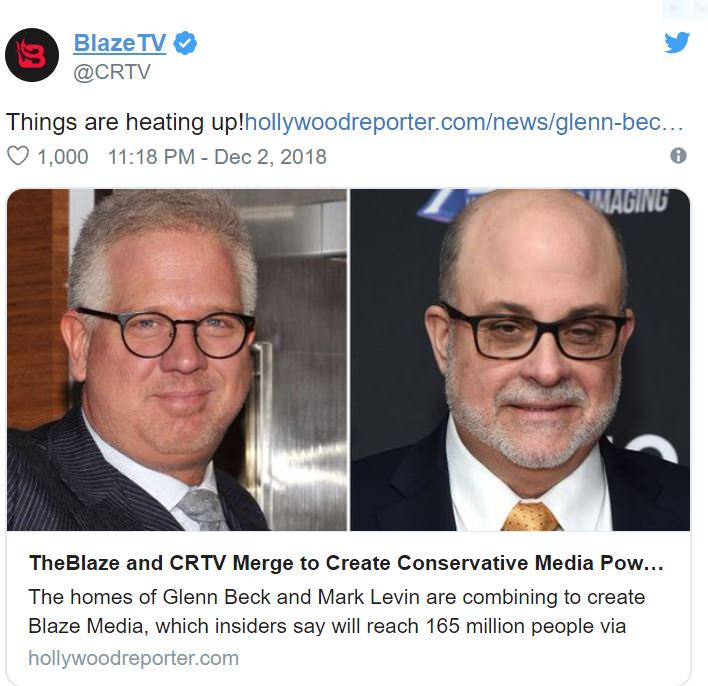 Don’t tell me. Beck is the straight man.

... The decision for the merger was made by the principals of CRTV and TheBlaze.  Also, the headquarters will not be in Dallas, TX— Mark R. Levin (@marklevinshow) December 3, 2018

Thank you Ben. We are thrilled to be joining forces with @marklevinshow and all that he and his crtv team have built. They already had a powerhouse line up. We are all stronger together. #blazemedia https://t.co/iOHszAIx9U— Glenn Beck (@glennbeck) December 3, 2018

I considered a CRTV subscription for a time and am now glad I didn’t as I won’t have anything to do with Beck the Nutburger.

Blaze Media is one of the nation’s largest independent media companies. Products and programming span cable and satellite TV, subscription video on-demand podcasts, digital print, and other distributed publishing. Blaze Media is a pro-America, pro-free speech media company. We strive to empower content creators to who they are, without filters.

There are no PC advertisers controlling the content, no digital mobs calling the shots, and no sensors muzzling the message.

Things are heating up. 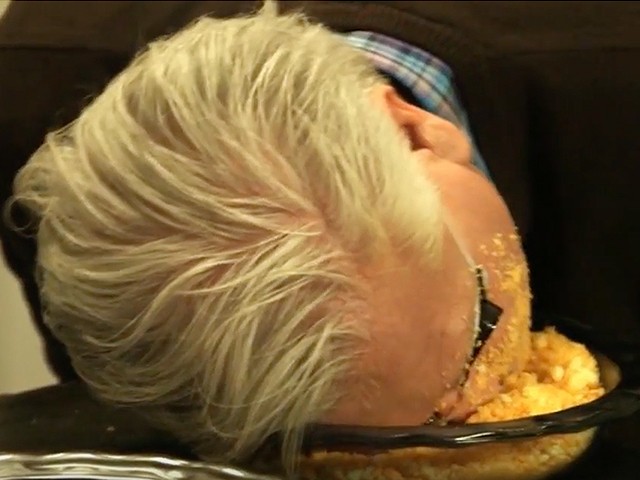 I was waiting for the cheetos photo.

I’m willing to give Beck a 2nd chance. Unfortunately he already used it up.

Levin I forgive unless he goes Goldberg again

PAY MARK STEYN THE LEGAL JUDGEMENT YOU OWE HIM!

Nobody likes a deadbeat...

I hope the folks at the Blaze considered the 4 million dollar judgement owed to Mark Steyn.

They don’t care about that.

Glad I never subscribed to CRTV now. Beck will never get one thin dime from me.

Let me educate you:

Mark Levin and Glenn Beck did not merge. CRTV and TheBlaze merged. Mr. Levin does not hold management authority in CRTV... The decision for the merger was made by the principals of CRTV and TheBlaze.

Heather Mac Donald talked about today's educational problems and her book The Diversity Delusion: How Race and Gender Pandering Corrupt the University and Undermine Our Culture.
It's well worth watch again. You should read Robert VerBruggen's article reviewing her book in the article Misdirected Hysteria/
Here's an excerpt of that review:

... Students called for the talk to be “shut down” and repeatedly smeared Mac Donald as a “fascist.” Fearing violence, the administration changed the venue to one with fewer glass windows and more escape routes and shuttled her to what she describes as a de facto “safe house” with the blinds drawn. She eventually gave her speech indirectly, via video stream; the Q&A session was cut short after two questions.

Mac Donald tells this story in her new book, The Diversity Delusion, before proceeding to offer a wide-ranging challenge to campus orthodoxies on race and gender. She covers everything from college administrators’ anti-racism policies to trivial on-campus racial incidents that inevitably blow up into major scandals to allegations of a “rape epidemic” to the push to bring more women into science. ...

For anyone steeped in liberal dogma, The Diversity Delusion will provide the other side of the story. It will also be invaluable for conservative college students who want to know what their professors aren’t telling them. But what struck me most, more than ten years out from my own graduation, was how simply misdirected the aca­demic Left’s energies are — forcing conservatives to spend their time batting down ridiculous but ubiquitous assertions rather than addressing the underlying issues. Claims about campus sexual assault are hugely overblown, for example, but sexual assault is a serious problem, it’s almost certainly underreported, and it appears (per an extensive Justice De­part­ment report) to be a more common experience among women who do not go to college. So why have we all been talking about an easily debunked campus rape crisis since the 1980s?

On race, Mac Donald is of course correct that university administrations (and major corporations) go out of their way to welcome underrepresented-minority applicants, to the point of severely biasing the admissions and hiring processes against whites and Asians. But the same is not true of other actors in society. Various experimental studies, including ones that send “matched pairs” of black and white testers to apply for jobs, show that blacks still face marked discrimination in the job market, particularly the low-wage job market. In one matched-pair study conducted in New York City that varied applicants’ criminal records in addition to their races, “black and Latino applicants with clean backgrounds fared no better than white applicants just released from prison.” Would that college activists spent more time talking about this and less time mau-mauing the flak catchers on their own liberal campuses. ...

... The Diversity Delusion does an admirable job of dismantling liberal academic narratives. And if anyone has earned the right to do that without looking back, it’s Heather Mac Donald.

Yep—to give this news any respect the Beck-associated Blaze name would have had to gone, with management from the other side.

I really don’t understand why someone else—even OANN—hasn’t picked up Mark’s variety show, which would class up any television network.

And I do understand that Steyn’s probably a prickly personality to manage.