In rural eastern PA, there was large turnout. About 180 people waiting in line at 8 am. (polls opened at 7)

My first time voting from this location. I was in the book, but was asked to show ID.

Heavy turnout at my polling place in Pittsburgh, but the area is so overwhelmingly Democrat it won’t much matter either way.

In general large turnout is bad for us. It means the Leftards have found a way to get their voters off the couch.

161 posted on 11/06/2018 9:32:27 AM PST by Buckeye McFrog
[ Post Reply | Private Reply | To 12 | View Replies ]
To: ConservativeWarrior; tomkat
Here in Newton (southern NH just over Massachusetts border) - was at our Town Hall from 8 am to 12 noon, was asked to show ID & voted, then stood outside for Republican candidates. Getting the same vibes as 2016: YEAH!!!! Hoping for Eddie Edwards to win CD1 NH Congressional seat, GO EDDIE! 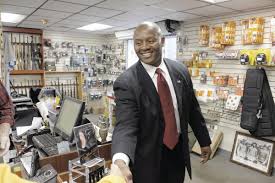