Trump: I have the right to pardon myself
The Hill ^ | 06/04/18 | Jordan Fabian and Mallory Shelbourne

President Trump on Monday said he has the right to pardon himself but insisted he has no reason to do so because he has not committed a crime, doubling down on an argument his lawyers made to the special counsel leading the Russia investigation.

“As has been stated by numerous legal scholars, I have the absolute right to PARDON myself, but why would I do that when I have done nothing wrong?” the president wrote in an early morning tweet.

“In the meantime, the never ending Witch Hunt, led by 13 very Angry and Conflicted Democrats (& others) continues into the mid-terms!”

In a subsequent tweet, the president argued the appointment of Robert Mueller as special counsel “is totally UNCONSTITUTIONAL” but cited no evidence to support his claim.

“The appointment of the Special Councel [sic] is totally UNCONSTITUTIONAL! Despite that, we play the game because I, unlike the Democrats, have done nothing wrong!” he wrote.

Trump’s statements will almost certainly inflame the debate over whether he can use his presidential powers to protect himself if Mueller accuses him of wrongdoing in the probe into Russia’s interference in the 2016 presidential election.

The question was reignited over the weekend when The New York Times published a January letter from the president’s legal team that opened the door to Trump shutting down the obstruction investigation into him or even pardoning himself.

"He could, if he wished, terminate the inquiry, or even exercise his power to pardon if he so desired," the attorneys wrote to Mueller.

Trump's lawyer Rudy Giuliani was not a member of the team when the letter was sent, but he nonetheless agreed with the expansive view of the president’s powers shared by his predecessor, John Dowd.

Giuliani said on ABC News's “This Week” that while the president “probably” does have the power to issue himself a pardon, it would not be politically expedient.

“I think the political ramifications of that would be tough. Pardoning other people is one thing. Pardoning yourself is another,” the former New York City mayor said.

The idea of a self-pardon received pushback from legal scholars and Democrats, who said it shows the president believes he is above the law.

They fear that a string of politically tinged pardons made by Trump is a sign he could be gearing up to use clemency to shield his associates who have been indicted in the Russia probe — or even himself.

“Mr. President — you are 0 for 2 on the Constitution this morning,” tweeted Senate Minority Leader Charles Schumer (D-N.Y.)

Some Republican allies of Trump also warned him not to pardon himself.

“I don't think a president should pardon themselves,” House Majority Leader Kevin McCarthy (R-Calif.) said on CNN’s “State of the Union.”

13 angry and conflicted rats are very butt hurt by that statement.

Someday the “highly educated and intelligent” commie ‘RATs are going to figure out why President Trump sends out these tweets and all the fun and free entertainment will come to an end. Until then, enjoy the president running circles around these clueless morons. 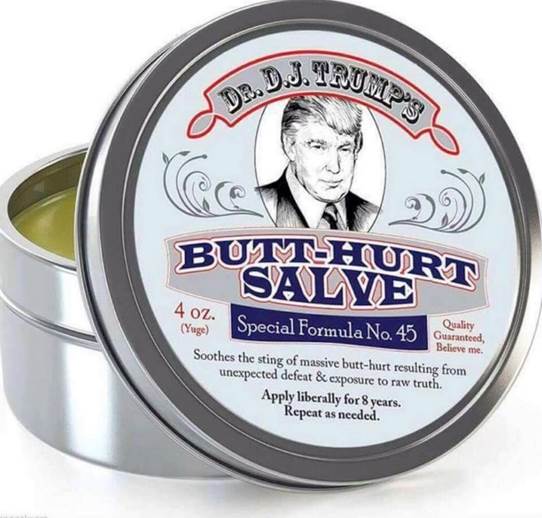 Trump knows the left. They would troll us on and on.

Payback is a bitch.

It's great entertainment, especially the panic in the media.

Giuliani said on ABC News’s “This Week” that while the president “probably” does have the power to issue himself a pardon, it would not be politically expedient.


i.e. the President’s simple statement of fact is, in fact, a true statement. It’s like saying, “I have the legal right to hire a prostitute in some areas in Nevada.”


It is a simple statement of fact.

POTUS Rights
You have the right to pardon yourself.
Anything you say or do cannot be held against you in a Court of Law.

The dems are going to change it to: “Trump’s going to pardon himself” like they claimed he said that he wanted to be president for life.

They’re gonna need that in the 5 gal. bucket with a grease-gun applicator!

I know of no one who would have ever argued that a president does not have the power to grant himself a Pardon.

He’s messing with their minds

This is why criminal cases in ordinary courts, which is what the chattering class has been yacking about, don’t apply to a sitting president. Only impeachment in Congress would.

The President had a great week last week, but starting off this week with “I can pardon myself” is just Dumb Dumb Dumb...People will hear it as “I committed a crime and I can get away with it”. Dumb dumb dumb

The DOJ apparently opined back in the day that Nixon could not pardon himself.

Do not pose rhetorical questions based in total fantasy if you do not expect a sarcastic response.

Donald Trump ends up living rent-free in the heads of these otherwise vacuous “commentators”.

“The President had a great week last week, but starting off this week with “I can pardon myself” is just Dumb Dumb Dumb...People will hear it as “I committed a crime and I can get away with it”. Dumb dumb dumb”

Don’t take it out of context. What Trump said is correct and he said it in a way designed to make the left scream. it was a great line, imo.

“I have the absolute right to PARDON myself, but why would I do that when I have done nothing wrong?”