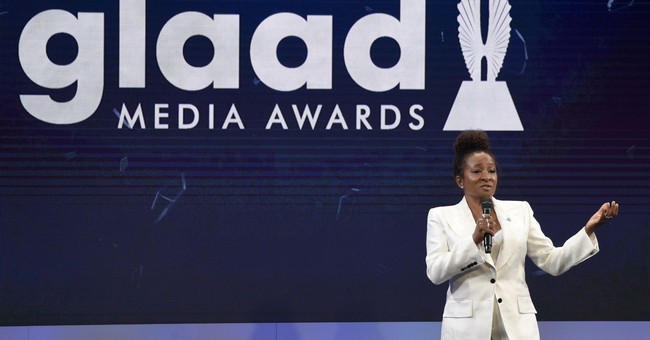 I don't normally watch the GLAAD Media Awards. Not that there's anything wrong with them. GLAAD, by the way, originally stood for "Gay & Lesbian Alliance Against Defamation" before the organization declared that GLAAD was its name and not an acronym.

But I did see a video of Britney Spears' acceptance of GLAAD's Vanguard Award last week.

"I feel like our society has always put such an emphasis on what's normal, and to be different is unusual or seen as strange," Spears said.

She added some other stuff about how we're all individuals together, or something. There was a time when I might have had a bit of fun with Spears about some of the inconsistencies. But I've mellowed. It's all good. It was a nice speech, and she seemed sincerely honored to receive her award and grateful for the support of her fans.

But there's one thing that vexes me. I could have picked a thousand other examples from any given week to illustrate it, but this one got my attention.

"Those who only know one country, know no country," the legendary political scientist Seymour Martin Lipset observed.

What he meant is that if you don't know what distinguishes one country from other countries, you can't know what is normal about your country and what is exceptional about it.

For instance, these days we hear a great deal about America's deep-seated racism, as evidenced by various legitimately horrible incidents, particularly excessive force by police. Discrimination exists. But there's a difference between saying that discrimination or other injustices exist and that there is more work to be done, and saying that America is the most racist country in the world and that things haven't gotten better. (Search Twitter for "most racist" and "America" and scroll through the results.)

First of all, things have gotten better. In 1958, 44 percent of white Americans said they'd move if a black family moved in next door. Forty years later, that number had dropped to 1 percent. Were some whites lying? Probably, sure. But most probably weren't. When the Civil Rights Act was passed in 1964, only 18 percent of white Americans said they had a black friend. By 1998, that number was 86 percent. Some people were probably fibbing, but the mere fact that they wanted others to believe they had a black friend is a kind of progress.

There is one sure sign that white attitudes have changed: Rates of marriage between races have been trending up for decades. In 1967, only 3 percent of newlywed marriages were interracial. The rate has risen more than fivefold, to 17 percent in 2015. Presumably, people willing to spend the rest of their lives with people of another race -- never mind have children with them -- aren't lying.

But let me get back to my point. When I hear people say things about America -- it's racist, it's sexist, etc. -- or when I hear them say that America is the most this or the most that, I always want to ask, "Compared to whom?"

By no plausible objective standard is America the most racist or bigoted country in the world, even just among industrialized countries. On a 2014 list of countries ranked by opposition to having a racially different neighbor, America ranked 47th (with 6 percent of the population saying they were opposed). In raw numbers, we admit more immigrants than any other country. And as Amy Chua notes in her new book, "Political Tribes," "No other major power in the world has ever democratically elected a racial minority head of state."

I dwell on race because that's where so much of the passion is these days. But let's get back to Ms. Spears. She says that our society puts so much emphasis on being "normal." And again, one has to ask, "Compared to whom?" Does America have a history of discrimination toward homosexuals? Absolutely. Quick: Name a country that doesn't have such a history. Meanwhile, attitudes on homosexuality have followed the same trend as race.

More broadly, the idea that America is uniquely hostile to "being different" is an interesting thesis, and it might have had some basis in fact 50 or 100 years ago (though I'm skeptical).

America is not without its problems. And the fact that we're not nearly as bad off as people claim doesn't erase the need to tackle them. But perhaps those problems would be alleviated somewhat if we stopped insisting they're so much worse than they really are.

All “differents” are not all normal.

I dwell on race because that’s where so much of the passion is these days. But let’s get back to Ms. Spears. She says that our society puts so much emphasis on being “normal.” And again, one has to ask, “Compared to whom?”


Well that is an easy question. “Everyone one does what is right in their own mind.” “Good is evil and evil is good”


The standard is me, myself and I.

God used to be the standard by which all things were measure. (mostly)

All “differents” are not all normal, or healthy.

I believe we are reverting back to the old days, and with good reason: Whites (males in particular) are being marginalized by government policies and openly maligned in the public sphere with no repercussions. Many are opting to go the way of the dodo rather than breed, leaving what was built by our ancestors to people who create and maintain nothing. Growing areas of our country resemble the Third World, and it isn’t coincidence.

You can be Different but being a Different Asshole is something altogether different.

There’s nothing wrong with discriminating against perversion. ACCEPTING it is wrong.

It’s crazy to hear over and over how racist sexist homophobic etc we deplorables are.

There has never been a better time in our history than now, in terms of life for minorities, homosexuals, foreigners, etc than right now.

Homosexuals have never been more free to be open than nowadays.

It’s odd to me, that these activist types, compare their lives against some unatttained ideal, rather than compare to how things were decades ago for their people.

It’s so.predictable as to be parody, to hear black activist types talk about changes since Brown vs. Board of Education, or the passage of the civil rights laws of the ‘60s. The response is always the same. They tell us that we have come a long way, but there is still a long way to go.

With such thinking, we never can be credited for the great progress we have made, because we aren’t “there” yet.

And what we have to do to get “there” and achieve true equality and freedom is seemingly out of reach, the way these people talk.

Come to the light, Jonah. Embrace your inner racist.
Stereotypes are based on reality.