A judge has rescinded a bench warrant for a University of Hawaii professor who spoke Hawaiian in court, in an incident that sparked outrage among Native Hawaiian activists. 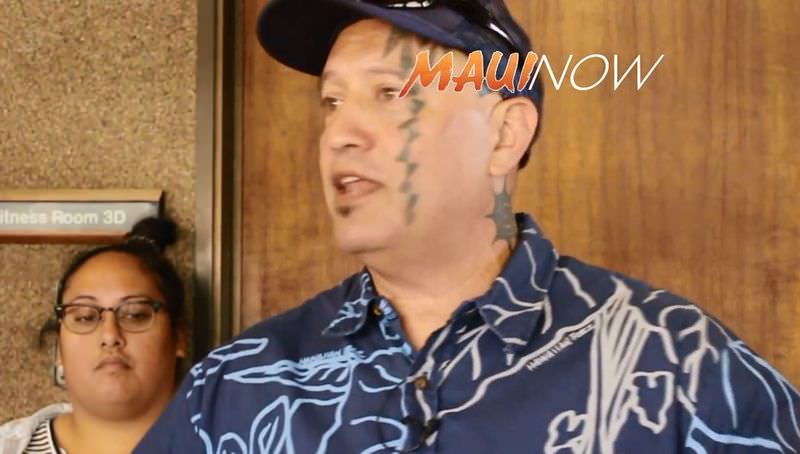 The state Judiciary also said it would review "its polices regarding the provision of Hawaiian language interpreters."

While Kaeo while standing in front of the judge, Kobayashi declared him not present for the hearing because he didn't identify himself in English.

“Since the court is unable to get a definitive determination for the record that the defendant seated in court is Mr. Samuel Kaeo, bailiff, make three calls for the defendant," Judge Blaine Kobayshi said in court.

Kaeo was in court to face charges stemming from an August 2017 protest over the construction of a new telescope atop Haleakala.

A courtroom full of Kaeo’s supporters immediately began yelling from the gallery after the warrant was issued.

But their outrage didn't move the judge. A bench warrant for $750 was issued for Kaeo’s arrest.

Some agree with the judge's decision. Former City Prosecutor Peter Carlisle said the judge was in the right.

"This gentleman is clearly and unequivocally, remarkably, proficient in the English language and what he's using this for is to follow up in the type of protest that he had on Haleakala," said Carlisle.

Current law states translation must be provided upon request to speakers with limited English proficiency.

"I want to change the law so it's folks with limited English proficiency or speakers of Hawaiian," Ing said.

On Thursday morning, Kobayashi issued an order recalling the warrant.

Kaeo said while he's grateful the warrant was dropped, he wasn't told why the judge decided to recall it.

"This judge, I think he fails realize there's been a long movement of revitalization of Hawaiian language and the ability for Hawaiians to express themselves in the court," Kaeo said. "This is not just about language. This is a larger questions in which Hawaiians have been struggling to become visible within Hawaii and the world."

In addition, a hearing was scheduled over the use of a Hawaiian language interpreter in the case.

Addressing his supporters outside a Wailuku courtroom Wednesday, Kaeo said the judge's decision to issue the arrest warrant left him confused.

"I dealt with this judge maybe 15 times before. So, obviously, it had nothing to do with they couldn't recognize me," he said.

"You see what the issue was? It wasn't about me. It was about the fact that I was speaking Hawaiian. But these small obstacles are the kinds of things we overcome."

Kaeo was one of six people arrested following the August 2017 Haleakala protest, and was among hundreds who gathered to try to prevent construction crews from getting through.

Kaeo had requested a Hawaiian interpreter during his trial, but the judge denied his request. Hawaiian and English are the state's official languages.

The case also drew rebuke from Office of Hawaiian Affairs CEO Kamanaopono Crabbe, who said on Thursday that it's relieved the arrest warrant has been rescinded.

"While this incident should have never occurred, it was a wake-up call for many in our community," Crabbe said. "That a Native Hawaiian was nearly arrested for speaking his mother tongue in 2018 indicates that despite the substantial progress made to revive the Hawaiian language over the years, we still have much further to go."

Meanwhile, the Native Hawaiian Legal Corporation said in a statement that the episode had left its attorneys "baffled."

"The Court’s action yesterday is inexplicable and nonsensical given the judiciary’s ultimate obligation to ensure the mere appearance of prejudice has no place in this sacred institution," the nonprofit said, in a statement. "We are greatly disappointed that we live in an age where this situation occurred in the first place and we will wait to see how this matter unfolds at the next hearing."

However, a motion to conduct the court proceedings in English explains its position.

“The practical realities of requiring an interpreter this case would cause needless delay in the trial process and an unnecessary expense,” prosecutors said, in court documents.

Kaeo is an associate professor of Hawaiian Studies at the University of Hawaii Maui College.

He is facing disorderly conduct, obstructing a sidewalk, and obedience to police officers charges stemming from the August protest. All three charges are petty misdemeanors.

The Hawaii State Judiciary issued a statement to Hawaii News Now on Wednesday stating, "there is no legal requirement to provide Hawaiian language interpreters to court participants who speak English but prefer to speak in Hawaiian. In those cases, judges have the discretion to grant, or deny, a request for an interpreter."

Supporters for Kaeo are organizing a rally for Friday at the Old Wailuku Courthouse from 3 p.m. to 5 p.m.

WTH are we still in this place with people and pangusge???

Shoot, release Hawaii from statehood, lease the bases and let Hawaii figurenthe rest of this stuff out on their own.

Yes! Attempting to kill any economic advance in Hawaii is the best way to preserve the Hawaiian language.
NOT.

Hawaii, where one of the top products is BOTTLED WATER FOR EXPORT, does not appear to be a solid economic base.

The same jamokes playing games with the Thirty Meter Telescope (a high tech beauty) project would be better served to learn Japanese or Chinese.

If they were demanding local production of the telescope, it might make some sense.

“The top two languages spoken other than English are Tagalog and Ilocano. Japanese, Spanish, and Hawaiian rounded out the top five.”(Wiki)

Their new Asian overlords may not give a crap about their dying language.

Pearl Harbor Naval base, really the only reason.

“Hawaii should join California in seceding from the US. Those two nut jobs deserve each other.”

You realize, the first project the two states would undertake would be to build a bridge between the two...maybe throw in a high-speed rail.

You think their is a chance, they would waive the environmental impact statement? /s..Roll eye's now!!!

I am thinking that Hawaii, California, Oregon and Washington should form their own country. They can revel in their Marxist ideology and invite other Leftists to join them. They could call themselves West America. Oh wait, they hate America, I guess that wouldn’t be a good name for these morons.

Hawaii is great except it is full of Hawaiians.

And they are mostly violent, retrograde savages who hate white people.

Civilization really has no place for them, as we no longer fight constant internecine battles with rocks and sticks.

I’ve been urging that for the longest time.

Dude, I’m glad you got the gist of that. I have been flu sick as a dog for over a week and it is hard to hit the right keys with any consistency while
on codeine cough syrup.

I’m sorry, that’s never pleasant. Get lots of rest and get well soon !