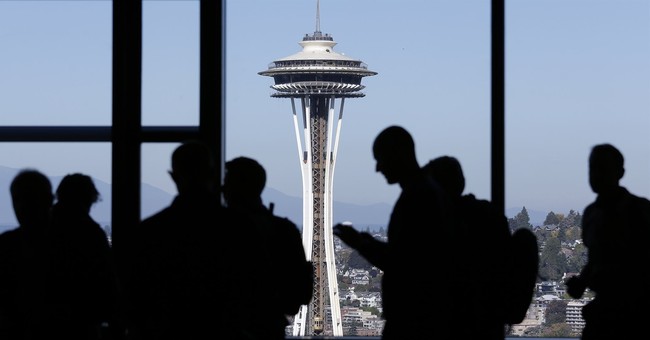 If it were a plague, the government would rush to quarantine the infected, as occurred during Europe's Black Death in the 14th century.

An immigration debate at Seattle University School of Law is a plague of a different sort, but deadly in a different way. The victim here is the right to free speech.

The Washington Free Beacon reports that Annette Clark, the dean of Seattle University's Law School, has revoked the school's sponsorship of a Federalist Society event. The reason? The proposed debate on immigration, hosted by the school's Access to Justice Institute, might be "harmful" to minority students and "undocumented immigrants," aka people who broke the law to get to America, though we are not supposed to talk like that these days.

At first, I thought it was a joke. It is. But a joke played on those elites who claim to believe in tolerance, academic freedom, and inclusion. Dean Clark's edict reflects her and the school's intolerance, academic propaganda and exclusion of any view that does not conform to the university's imposed ideology. Isn't this the stuff of re-education camps and gulags?

Many college campuses claim devotion to diversity while practicing and imposing conformity. To them, diversity has to do with skin color, ethnicity, and sexual orientation. It is secular liberalism dressed up in different garb. Real diversity would include people of different opinions.

At Seattle U's Law School, the Federalist Society, a conservative organization that believes in an originalist view of the Constitution, was preparing for an immigration debate. The last I checked a debate is supposed to include opposing points of view. The purpose of a debate is to inform people so they can decide which view is superior to the other. In the '80s, these were the kinds of debates in which I participated on many college campuses. With only a few exceptions I was granted a respectful hearing, as was my debate opponent. Often we would attend a dinner before the debate, or a reception afterward, where students and faculty could observe us interacting with decorum, humor and mutual respect.

Invitations to college campuses began disappearing in the '90s, and I haven't had any since. The stories of high-profile speakers being denied the right to speak or shouted down and demonstrated against should they actually make it onto a campus are legion.

The kind of censorship practiced in Seattle is not unique to that school either. It is trending across the country. Increasingly, campuses have become "safe spaces" so that "snowflakes" will not be troubled by ideas that rattle their still-developing brains, which should, instead of stagnating, constantly evolve. If they think they already know everything, why spend time and money going to college?

The greater question is this: Why do so many parents, especially conservative parents, send their children to schools that undermine their faith and values, distort history and promote causes that will not help them get a job once they graduate? A corollary question: Why do students take on so much debt to attend universities where their "consciences" might be raised on the liberal side, but where they are shielded from what real life looks like?

Nat Hentoff, the late liberal journalist and social critic, said the answer to speech you don't like is not less speech, but more speech. The students at Seattle Law School are being denied a well-rounded education by the speech and thought police. Students should demand that a portion of their tuition be refunded, and the federal government should consider denying tax subsidies to institutions of "higher learning" that practice censorship.

Federal student loans are the Achilles Heel of these leftist fanatics.

Stop the Spice from flowing and the Empire of crazy leftists falls.

Annette Clark, the dean of Seattle University’s Law School, gives aid and comfort to the enemy. The Constitution has a word for that.

Who thinks the left’s preaching of diversity, inclusion, compassion and multiculturalism includes ideas they don’t like? All of these high sounding ideas are given to ideas and speaker on the hard core left but no where else. Do as I say, not as I do.

4 posted on 10/12/2017 11:45:59 AM PDT by Uncle Sam 911
[ Post Reply | Private Reply | To 1 | View Replies]
To: Kaslin
Thank you for posting this further proof of the cultish, ideological Progressive Left, as its called, and its irrational and oppressive fear of allowing students the freedom to examine competing ideas!

"Progressives" talk a lot about "diversity." By that, Hillary and her crew, as well as the "sheeple" who follow her, mean "diversity" of anything and everything except freedom of conscience, freedom of expression of ideas which differ from the "Progressive" agenda for "changing" America from adherence and devotion to the ideas of liberty outlined in its Declaration of Independence and structured into its Constitution for self-government.

Shame on them and all whom they control through fear!

The things we are witnessing are the consequences of decades of Progressive academic and government "elitists'" indoctrination of America away from its founding principles in the ideas of liberty and toward the cultish and oppressive ideology of Progressivism, an ideology which demands complete submission to "progressive" regressives who believe they are entitled, and were appointed, to rule over everyone else. A society where Progressives rule is a society where the ideas of liberty have been subordinated to the ideas of tyranny.

Thomas Jefferson, only days before his death on July 4, 1826, explaining his inability to attend a gathering to celebrate the 50th Anniversary of the Declaration, wrote to Roger Weightman:

"I should, indeed, with peculiar delight, have met and exchanged there congratulations personally with the small band, the remnant of that host of worthies, who joined with us on that day, in the bold and doubtful election we were to make for our country, between submission or the sword; and to have enjoyed with them the consolatory fact, that our fellow citizens, after half a century of experience and prosperity, continue to approve the choice we made. may it be to the world, what I believe it will be, (to some parts sooner, to others later, but finally to all) the Signal of arousing men to burst the chains, under which monkish ignorance and superstition had persuaded them to bind themselves, and to assume the blessings & security of self-government. That form which we have substituted, restores the free right to the unbounded exercise of reason and freedom of opinion. All eyes are opened, or opening, to the rights of man. the general spread of the light of science has already laid open to every view. the palpable truth, that the mass of mankind has not been born with saddles on their backs, nor a favored few booted and spurred, ready to ride them legitimately, by the grace of god. These are grounds of hope for others. for ourselves, let the annual return of this day forever refresh our recollections of these rights, and an undiminished devotion to them." (Jefferson, June 24, 1826, to Roger Weightman, End of Jefferson quotation)