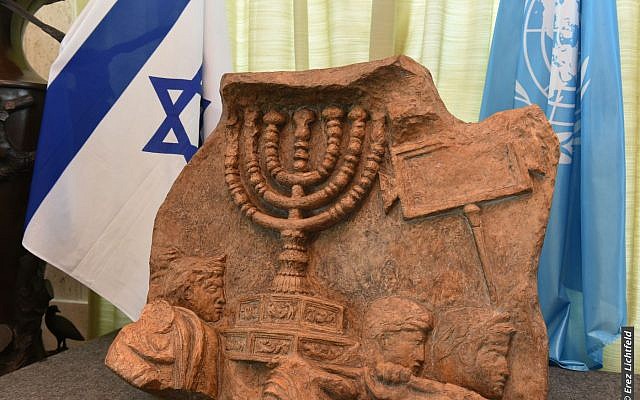 Israel handed a replica of a frieze from the Arch of Titus to the head of UNESCO, using the monument commemorating Rome’s victory over Jerusalem for a not-so-subtle critique of the organization’s resolutions that ignore Jewish links to the holy city.

The replica will be exhibited in UNESCO’s Paris headquarters as a “greeting from the historical truth about the existence of two Temples on the Temple Mount,” said Carmel Shama-Hacohen, Israel’s ambassador to the agency.

Shama-Hacohen handed the replica to UNESCO’s outgoing director-general Irina Bokova, who, in her speech, offered a more subtle critique of one-sided anti-Israel resolutions passed routinely by her organization’s member states.

Furthermore, such resolutions “pave the way for spreading anti-Semitism and terrorism,” Shama-Hacohen went on.

“To those who are using UNESCO and its executive board as a political tool to promote political stability in their own country I say, enough. Too many people are paying a heavy price for your resolutions,” he said. “Taking this organization and Jewish history as a hostage for your political problems is not the answer.” 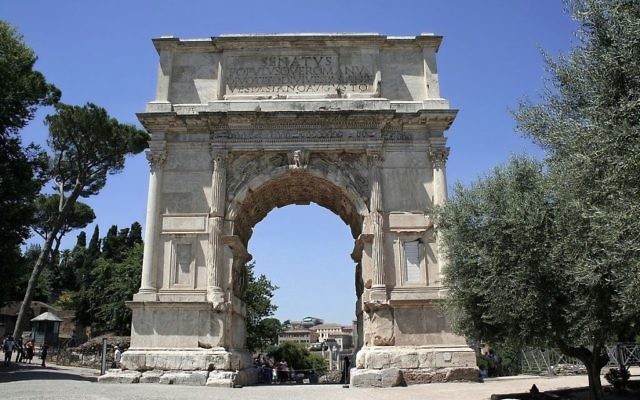 Built in the year 82 CE, the Arch of Titus commemorates Rome’s victory over the Jews and subsequent siege of Jerusalem 12 years earlier. It depicts Roman soldiers carrying away the grand menorah that was used by the high priests in the destroyed Jewish Temples, and is seen by many Jews as proof of the Jewish people’s connection to Jerusalem.

“The Arch of Titus in Rome illustrates a most tragic event in the history of the Jewish people, bearing witness also to the millennial relationship between the Jewish people and the city of Jerusalem,” Bokova said at the event.

Bokova, who will end her term as UNESCO head next month, accepted the gift — crafted by the Art Conservation Department at the Israel Antiquities Authority — as “recognition of the strength of our partnership with Israel, and as a promise of a deeper cooperation in the future.”

The story of the Temple’s destruction “stands at the heart of Jewish identity,” she said. “This story can guide us through the depths of time, showing the resilience of a people, helping us understand the role of transmission and memory, how it structures identities over centuries, how cultures permeate and influence each other.”

Jerusalem, she said, is sacred to the three monotheistic religions, “and nowhere in the world more than in Jerusalem do Jewish, Christian and Muslim traditions share space and interweave to the point that they support each other.”

Referring to the Temple Mount by both its Hebrew and Arabic names — Har Habayit and Al-Haram al-Sharif, respectively — she noted Jerusalem’s universal value to all three religions.

Said Bokova: “Too often we see the rise of exclusive discourses, trying to distort and cut our heritage in pieces, in endless disputes about what belongs to who, to this culture or another, about whose heritage is the greatest, the oldest, the holiest.”

She always tried to work with all UNESCO member states to “strengthen the spirit of coexistence,” she said. “It is not always easy, but there is no other way.”

no doubt this is a better way to handle the UnitedNazis than mine. I would just boot them out of Israel (and tell them where they can go)

Nice but their rhetoric is to destroy Israel any way they can, their whole reason to exist is to destroy all jews. I think this piece will either end up in a back room, destroyed or maybe some token to show their tolerance while working harder to destroy Israel and all Jews. Sorry for being cynical but my whole life has seen so many wars and attacks on Israel I don’t think this will go anywhere as evidenced by that history.

She didn’t even get it.

No. Long ago my father would tell me the most effective insult was the one the recipient misunderstood. Until later when response will be misunderstood. Sticks in their craw longer.

Israel was magnanimous in gifing UNESCO a copy of a historical Roman/Italian relic. Nothing more.

Thanks SJ for the welcome back, and for the ping/topic. UNESCO's denial of history continues though, even through Bokova's well-spoken remarks:

Cultural agency's chief Irina Bokova accepts frieze of menorah being carted off by Romans as 'recognition of the strength of our partnership with Israel'.