KRAMATORSK Ukraine (Reuters) - In quiet defiance of a promise by Kiev's pro-European government to cut arms ties with Moscow, a state-owned defense firm in eastern Ukraine has vowed to work around the clock to fill every Russian order it gets.

As for many of Ukraine's defense firms, the stakes are high for Yuzhmash, an industrial behemoth that was so jealously guarded by the Soviet Union that the nearby city of Dnipropetrovsk was closed to foreigners until the bloc split apart.

Now, in the face of the Ukrainian crisis and greater economic hardship, Yuzhmash faces a difficult balancing act between its political masters in Kiev, its biggest customer in Russia and the threat from pro-Russia separatists in eastern Ukraine who have tried raiding factory stockpiles.

The plight of Yuzhmash, whose full name is the Southern Machine-building Plant, highlights the importance of defense ties between Moscow and Kiev for both sides.

With police loyal to Kiev unable or unwilling to maintain order in eastern Ukraine, Yuzhmash, like other defense firms, has managed to find its own ways of maintaining security.

In an agreement signed between Yuzhmash's General Director Sergei Voit and regional governor and powerful businessman Igor Kolomoisky, the governor promised to protect Yuzhmash, its facilities and workers from "unauthorized entry".

Kolomoisky, one of Ukraine's richest businessmen, has sponsored an increase in the number of soldiers and police officers across Dnipropetrovsk, paying their salaries and providing body armor and ammunition.

"These are extreme times."

Does he know anything about how N. Korea ended up having rockets which resemble Yuzhmash's R-250?

This story is more detailed, and likely, more accurate.

Agree, and here is an abstract from Dailysignal:

The RD-250 rocket engine was produced at the Ukrainian Yuzhmash factory until 2001, Yuriy Radchenko, head of the State Space Agency of Ukraine, told journalists in Kyiv on Tuesday. At the Ukrainian facility, the double chamber, liquid-propellant RD-250 engines were mated with the Soviet R-36 ICBM during the Cold War. The engines were also used for the Cyclone 2 and 3 rockets, which Russia used to launch satellites into space until 2006 and 2009, respectively.

Russia cut its orders of the Cyclone rocket in 2006, and the Yuzhmash factory has not found another buyer. Only Russia currently possesses the rockets, all of which are mated with Ukrainian-made RD-250 engines. Russia has between seven and 20 of the Cyclone rockets stored in unknown locations, Radchenko claimed on Tuesday.

If North Korea did in fact receive modified RD-250 engines from an outside source, Ukraine’s space chief claimed it was from Russia, not Ukraine. “They [Russia] can supply these engines from the finished rockets to whomever they want,” Radchenko said.

Russia shares a 10.5-mile-long land border and shipping routes into North Korea. In the 1980s and 1990s, Moscow supplied Pyongyang with missile technology for the regime’s Scud, Nodong, and R-27 (Musudan) rockets.

This dude is one of the top multi-billionare Oligarchs in Ukraine....known for often using "quasi-military forces" to enforce hostile takeovers of companies he's after and strong-arm tactics' to replace directors on the boards of companies he purchases stakes in.....and/or to gain his political interests.

He's a 'player' to wherever he can buy what he wants regardless if Russia or Kiev leaders...he has no loyalty but to his own interests..nobody likes doing business with him.... 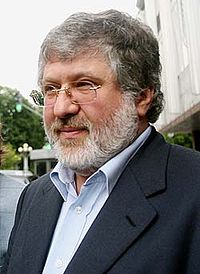