Rockstar Kid Rock set off a political firestorm after teasing his Twitter followers about a potential Senate run in Michigan.

News broke this weekend that Kid Rock is LEADING challenger, Dem Debbie Stabenow in a new poll 30% to 26%!

Days later, Kid Rock tweeted out a ‘manifesto’ to his followers, laying out his political believes in a short graphic. 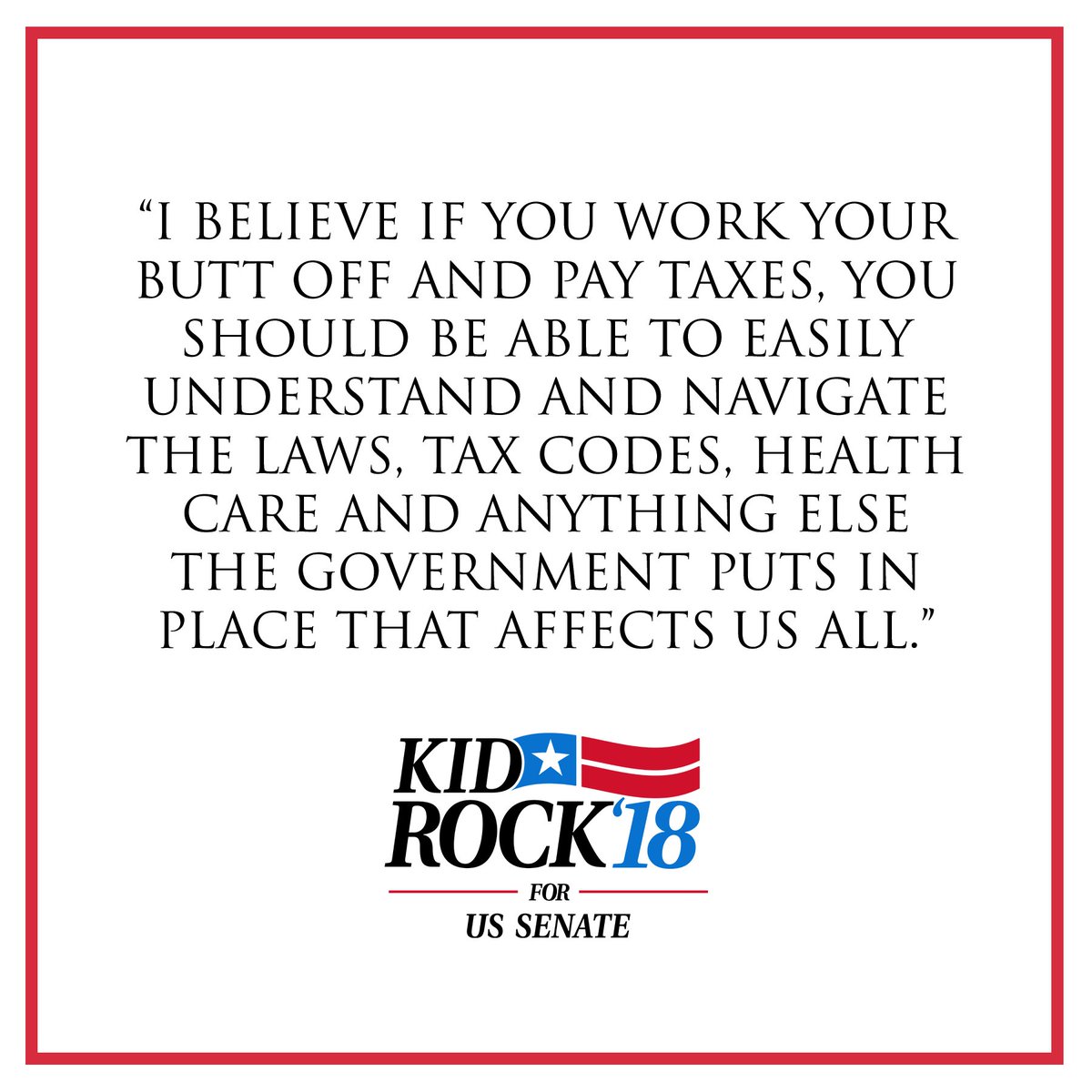 He would be a big improvement over Dem Debbie Stabenow.

“As an ordained minister I don’t look forward to marrying gay people, but I’m not opposed to it.” - Kid Rock

I hope he runs and wins.

If I lived in Michigan he’s have my backing... time to bring in more citizens - and fewer career politicians.

I wished He had named himself Kid Country! I’d vote for him over any Democrat.. Drain the Swamp!!!

That was Little Jimmy Dickens.

No surprise....the Trump revolution is trong.

But anyone with any sense can see KID will win this in a landslide.

If he doesn’t change those stances, he’s going to go over like a lead balloon in the primary.

Who is kid rock... some sort of millennial rapper?

If he doesn’t change those stances, he’s going to go over like a lead balloon in the primary.

so who, exactly, is going to kill a rock star, in michigan, in the republican primary?

That was Little Jimmy Dickens.

It was? I remember him..

I thought any R jersey was better than a D jersey.

14 posted on 07/23/2017 9:34:09 PM PDT by Lurkinanloomin (Natural Born Citizen Means Born Here Of Citizen Parents - Know Islam, No Peace -No Islam, Know Peace)
[ Post Reply | Private Reply | To 3 | View Replies]
To: Republican Wildcat
Here's the issue. Can we trust someone who is better on the issues to vote on those issues? Or are they going to be another republican who only votes to end ObamaCare when there is no chance it will be repealed?

Kid Rock seems to be a guy who is inspired by Trump to win. Its a question of trust. I would vote for Kid Rock if I can trust he will fight for MAGA over a perfect candidate that I can't trust that they won't deliberately fumble the ball on the 1 yard line.

15 posted on 07/23/2017 9:42:20 PM PDT by Vince Ferrer
[ Post Reply | Private Reply | To 3 | View Replies]
To: 867V309; Impy; BillyBoy
Someone who points out that a social leftist won't sell on the GOP side (ask Willard how well his mama did back in 1970 when she ran as a left-wing militant abortionist supporter pre-Roe), and there's two serious candidates in the race that will do just that if he doesn't move rightward. I didn't oppose his entry into the race, but I wasn't aware he was on the record with such BAD stances. He's also likely to face an onslaught of ads advertising his bad mistakes (which can be overcome) and his being perhaps a bit too vulgar for the electorate (putting it mildly).

Is he better than Lil Debbie "Dangerously Incompetent" Stabenow ? Sure. But so is a Ficus Plant. We'd be fools not to objectively analyze Kid Rock's positives AND negatives in making the race.

Gen X’er. Not a millennial.

Is he better than Lil Debbie "Dangerously Incompetent" Stabenow ? Sure. But so is a Ficus Plant. We'd be fools not to objectively analyze Kid Rock's positives AND negatives in making the race.

OK, fine. Who do you know that can beat the evil Stabenow?

Bob Young or Lena Epstein. The former was a statewide elected officeholder (Michigan Supreme Court) and Black Republican. The latter is a Jewish Conservative and served as President Trump’s Campaign Co-Chair in the state, becoming the first to successfully deliver the state to the GOP since 1988.

Let’s see which of these three are the best candidate to put forward for the general.

Not surprising. After America elected a personally unaccomplished and professionally unremarkable first term senator community organizer, anything is an improvement. Stabbencow is a very mediocre representative as well.