On September 20, 2016, US President Barack Obama spoke at the United Nations General Assembly in New York City. His passing comment on Palestinian Arab-Israel conflict underscored why peace did not advance, and his relationship with Israel worsened over his term.

Obama’s UN remarks covered a lot of activities during his eight years in office, including the Iranian nuclear deal; opening relations with Cuba; and tackling climate change. He spoke about the Arab-Israeli conflict very briefly, but the remark was telling:

“…surely, Israelis and Palestinians will be better off if Palestinians reject incitement and recognize the legitimacy of Israel, but Israel recognizes that it cannot permanently occupy and settle Palestinian land.  We all have to do better as leaders in tamping down, rather than encouraging, a notion of identity that leads us to diminish others.”

Since 1993, successive US governments have stood behind the Oslo Accords signed by both the Palestinian Authority (PA) and Israel, and its successor document, Oslo II signed in 1995.  That document was the last agreement signed by the two parties to settle the “Question of Palestine.”

Oslo II clearly spelled out what was “Palestinian land” to be fully governed by the Palestinian Authority in regards to military and civil administration.  That area is known as “Area A” in EGL (east of the Green Line) and the Gaza Strip.  Israel handed over all of that land to the Palestinians over a decade ago.

“Area B” in EGL/west bank of the Jordan River, is a mixed territory, in which the Palestinian Authority has responsibilities for civil matters, and military matters are coordinated jointly.  That land is neither “Palestinian Authority” nor “Israeli” exclusively.

“Area C” makes up the majority of EGL, and is “Israeli Territory,” in which Israel administers all matters, including civil and security responsibilities. 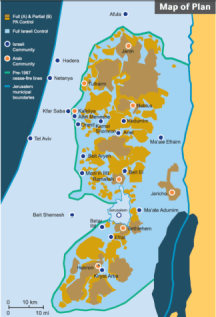 Map showing Areas A, B and C, east of the Green Line

The Israelis and Palestinians negotiated and agreed to the contours of these three blocks.  The parties also worked on a plan for additional land to be transferred from “Israeli Territory” to “Palestinian Authority Territory” over the years 1995 to 2000.  However, Yasser Arafat (fungus be upon him) rejected those negotiations at the last moment, and launched the Second Intifada in September 2000, as the interim Oslo II Accord was due to become permanent.  As such, no additional transfer from Israeli Territory to Palestinian Authority Territory has occurred.

As every US administration has pushed for the two parties to negotiate a two-state agreement on the basis of the Oslo Accords, there is NO BASIS for Obama to refer to Area C as “Palestinian Land.”  That land will continue to be Israeli land until such time as they agree to transfer parts of it to the PA.

As there is no Israeli “occupation” or “settlement” activity in the Israeli territory of Area C, Obama’s mischaracterization of Israeli actions in that land that they legally administer explains his comments and treatment of Israel since he took office in 2009.

It is also worth noting that international law, established in the 1920 San Remo agreement and the 1922 Mandate of Palestine, specifically gave Jews the legal rights to live and settle throughout Judea and Samaria (the entity known as EGL/West Bank did not even exist when five Arab armies illegally attacked Israel (1948-9) and Jordan annexed the region in 1950.)

“secure the establishment of the Jewish national home, as laid down in the preamble, and the development of self-governing institutions, and also for safeguarding the civil and religious rights of all the inhabitants of Palestine, irrespective of race and religion” (Article 1) Jews were to have full civil rights throughout Palestine, such as buying and building homes.

“The Mandatory shall be responsible for seeing that no Palestine territory shall be ceded or leased to, or in any way placed under the control of the Government of any foreign Power.” (Article 5) which Britain did anyway when it separated the east bank of the Jordan River to the Hashemite Kingdom, but which wasn’t a foreign power.

“The Administration of Palestine, while ensuring that the rights and position of other sections of the population are not prejudiced, shall facilitate Jewish immigration under suitable conditions and shall encourage, in co-operation with the Jewish agency referred to in Article 4, close settlement by Jews on the land, including State lands and waste lands not required for public purposes.” (Article 6) specifically stating that Jews were to settle throughout Palestine, including lands that Obama believes Jews “occupy”.

“The Administration of Palestine shall be responsible for enacting a nationality law. There shall be included in this law provisions framed so as to facilitate the acquisition of Palestinian citizenship by Jews who take up their permanent residence in Palestine.” (Article 7) in which Jews do not only move and settle the land, but become citizens of the country if they live ANYWHERE in the land, including Judea and Samaria.

“No discrimination of any kind shall be made between the inhabitants of Palestine on the ground of race, religion or language. No person shall be excluded from Palestine on the sole ground of his religious belief.” (Article 15) clearly states that no person should be barred from living anywhere in the land just because they are Jewish – as if human rights law wasn’t enough.

International law – and human rights law – clearly allow Jews to live throughout EGL/the West Bank. The Oslo Accords signed between the parties specifically state that Israel controls all of Area C until such time as the parties negotiate the transfer of more lands.

The notion that Jews living in houses that they have every legal and moral right to live in, is somehow connected to Obama’s belief of a “permanent occupation of Palestinian land” is false, misleading and arguably anti-Semitic on every level.

There have been some FRpers who are Bible folks who said that there have been scripture warnings against dividing the land up and suspect why there is big danger for folks in the southeast coming from one Hurricane Mathew.

If 0 could travel back in time, is there doubt THIS would be HIS address to the country?

The real problem is that the Palestinians do not and will never recognize Israel as a legitimate state. The very existence of Israel is the problem in their minds. There’s no way to compromise or negotiate with those who don’t even recognize your right to exist. The more land Israel gives up, the more Palestine will demand because acquiring all of it is the ultimate goal.