The Daredevil actress was arrested for crowding, obstructing or incommoding after crossing police lines during the Democracy Spring rally at the U.S. Capitol, ET has confirmed. While she was not handcuffed, Dawson was given a ticket for a $50 fine and was processed on site.

"This is a tremendous issue and I'm really grateful that I could be here and be a part of it," the 36-year-old actress told reporters following her arrest. "I wanted for me, personally, to be in solidarity with the people who put themselves on the line."

Dawson, who wore a leather jacket painted with presidential candidate Bernie Sanders' face on it, attended the nonviolent protest to "end the corruption of big money in our politics," Democracy Spring explains on their website.

"These are really important issues and the people really need them, and we're putting ourselves on the line for what a lot of people across America and across the planet really want to be able to see happen in America," Dawson explained. "Which is one person, one vote and to take the money out of politics, so we can have fair elections with real progressives."

"The outspoken actress, who was previously arrested in 2004 for protesting former President George W. Bush, has been documenting the rally via Instagram."

She was not "arrested" for "protesting former President George W. Bush": she was arrested for some sort of violation and/or crime.

Somebody needs publicity. I guess Donald Trump was not in town that day. Expect others, like Miley Cyrus to get into some performance art this summer.

Commie actress wants Communism in America, okie dokie..let Bernie take out 90 percent of HER wealth out of HER bank account and let’s see how she feels about spreading the wealth then

Never heard of her. She must be “wildly popular” among the low information crowd.

Put her in my cell

The police are so brutal she must be in a coma. /s

Who is totally informed ?
This I know, Rosario has a healthy pair of. “ lungs “ on her

Her boasting about her pride in being ‘involved’ is like my dog having a bowel movement on the lawn and bragging that he understands what childbirth is like.

“Like ohmagawd, protesting is SO in vogue right now even though we have no idea what the hell we are protesting.”

What gets me about these idiots is they protest Wall street buying politicians and here comes Trump who is self financed who can’t be bought off, who says he’s going to put a stop to that crap, and they protest HIM!

Well, nothing else of any worth in the story but I did learn a new word....Am I the only one? 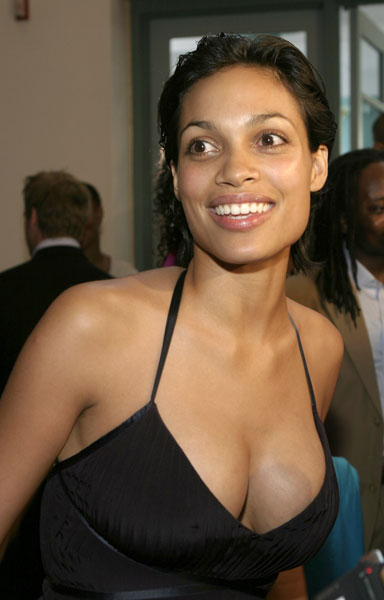 I think that means using an indoor toilet.

“”I think that means using an indoor toilet.””