Rounds of heavy rain will heighten the risk of flooding and mudslides across California as storms persistently roll ashore into the second week of March.

Rain bypassed the state during most of February, but a shift in the weather pattern will steer storms into the California coast this weekend and into next week.

"Storms will usher in moderate to heavy rain across California and heavy snow to the Sierra Nevada [through Monday]," AccuWeather Meteorologist Brett Rathbun stated.

Over half a foot of rain could fall across northern California. Snow levels will fall throughout the weekend, allowing feet of snow to accumulate in the Sierra Nevada. Travel will be extremely difficult and dangerous through the mountain passes.

TOPICS: Miscellaneous; News/Current Events; US: California
KEYWORDS: elnino; rain; storm; watersupply; weather
All right! After a VERY DRY February, we are finally getting some serious wind and rain on the SF Peninsula. I was afraid the storms were over for the season. When it rains and clears the air, the local wood burning Nazis let us burn some wood again, so we've got a roaring fire in the fireplace, even though it's a nice 61 degrees out. Something about a strong storm that makes it feel colder than it is and the fire makes it cheerful.

February brought us only 0.3 inches of rain, less than a tenth of normal.

My son and his buddies borrowed my Expedition today for a quick ski trip to Tahoe. They are probably going to get stuck in epic traffic jams. But the siren call of five feet of fresh snow was too much for them to resist. It'll probably take them ten hours to get home tomorrow afternoon. 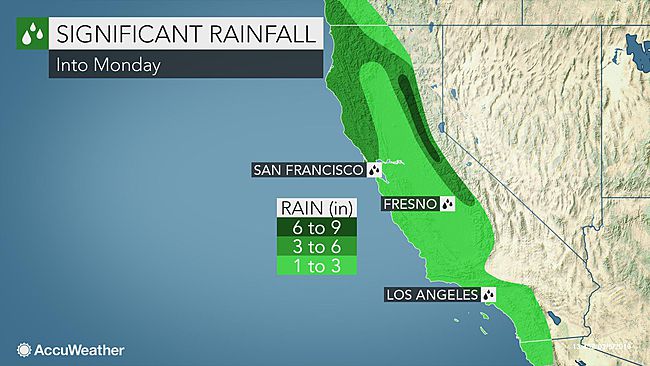 All three sump pumps are cranking.

I feel so bad for CA with their 23*7 good weather and to suffer such with this act of nature. Maybe we can send money to help add to the budget with all the illegal scum sucking it dry.

We DO appreciate the expressions of sympathy. Please send cards if you get a chance.

Seems like California is either too dry or too wet.

Batten down the hatches

I’m just north of the border (Oregon). Forecast is 4 to 8 inches of snow here tomorrow. Sounds good to me.

Six months wet followed by six months dry (a normal year). It all averages out.

Hope it’s true. But we’ve been hearing this for years now and it hasn’t happened.

No booms up here on the peninsula, but stiff winds and flash flood warnings are out, especially in Monterey and Big Sur.

True! It's the land of extremes in every asspect from weather to politics, including religion and EnvironMentalism (government's religion)!!!

Just woke up. This is like some serious East Coast rain. I love it!