I really feel that Ted had his best debate tonight. He’s gone from sounding too polished in the early debates to winning by a long shot tonight. Some will say it’s because I’m biased and what not, but really, his arguments tonight were passionate, emphatic, concise, and very effective.

Cruz, simply put, did the best out of all of the candidates and this focus group proves it. 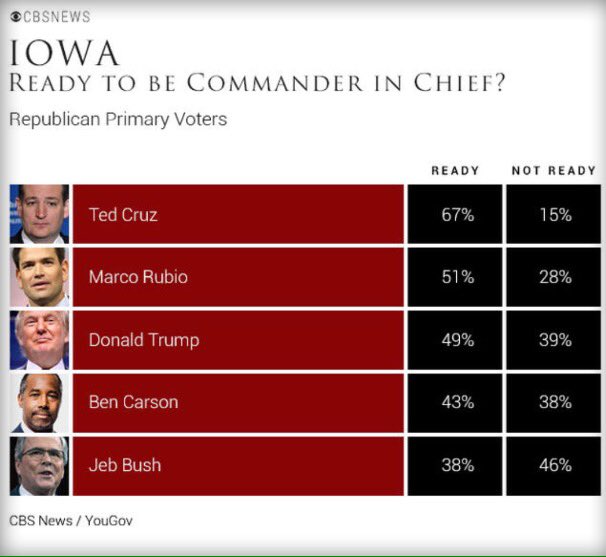 It was unanimous.
Woman on FNC this morning said her dialers thought Cruz won also. Unfortunately for Frank the post debate polls disagree with his 12 or so hand picked “unbiased” group. BOOM!

That said I thought Cruz did very well last night...he's done very well in every debate. The guy's intellect just shines through. But I thought that Trump did himself the most good. (what an awful sentence!)

TRUMP JUST SHOT HIMSELF IN THE FOOT!

Luntz is a GOPe cheerleader with zero cred, and his 'focus groups' are nothing more than Megyn Kelly Hate Trump Fodder.

I’d probably believe this, if it weren’t Frank Lutz...

My Poll is better than your Poll

Unfortunately, Ted Cruz did not have time to respond to the alleged accusations of flip-flopping that Marco Rubio detailed in the debate.

But as usual, Cruz showed his photographic memory by actually telling us that Rubio recounted 11 things !!

This is very similar to his recounting of all the questions asked by the CNBC moderator in that previous debate.

Yea! First the RedState blog and now Frank Luntz are your heroes...who’s next? I know - the old toe-sucker himself will come out for Cruz!

I tend to agree somewhat, but it's tempered with the knowledge that it is blatantly obvious that Luntz hates Trump.

Trump had to dig up the only conservative NY has ever had, Buckley, who died 8 years ago. New York liberals are up in arms that they were “attacked” by Cruz, while having voted for every Big Government/Small God candidate for decades. Cruz was right.

OK Luntz, go to Rupert’s office, and pick up your check : )

Unfortunately for Frank the post debate polls disagree with his 12 or so hand picked “unbiased” group. BOOM!


Facts dont matter to Frank, only his own agenda.

They intend to take out Cruz then Trump.

That is what was really happening.

Say that the GOPe is successful at getting rid of Cruz, what do you think they will do to Trump?

Do you think they are going to be all nice and fawning to The Donald?

Nope. They have their hit jobs all lined up.

So, all you Trumpets better be aware.

Do not think for one minute that your guy is safe.

The debate will not change polls, except perhaps to solidify Trump’s position on strength and immigration and Cruz’s debate skills (he was very good, obviously) and knowledge of the Constitution. The other candidates will not gain any traction. It appears that Bush and Kasich are resigned to where they are and that will not change. Rubio was somewhat successful, especially in his attacks on Cruz’s Senate record, but will not gain much traction, Christie did not perform well enough to change anything and I don’t know if Carson was awake.

With respect to Luntz’s group...he’s loved and hated by the same people depending on the outcome of his focus groups. Also, FWIW, all on-line polls show Trump winning almost 2:1

I don't think that first debate panel could have been more hand picked than last night's pro cruz team.

the first debate may have just been generic "anti-trump" panelist.

crews did an admirable job last night too, but not good enough to earn that support based on the debate.