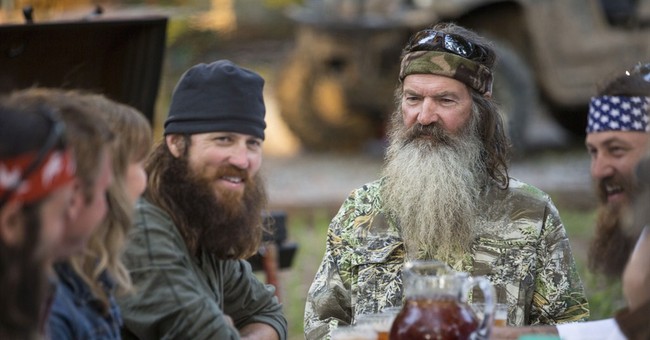 Duck Dynasty's Phil and Miss Kay Robertson met when they were 14 years old  and have been inseparable ever since. As Phil says, "The last thing you want to do is wait until a woman is 20 years old to marry her." After 40 years of marriage, four sons, a slew of grandkids and a mega hit show, the couple is now promoting a new book. In Exploring The Joy Of Christmas, Phil and Miss Kay share Christmas memories, Miss Kay's famous recipes, their favorite carols and more.

One of my favorite parts of Phil and Kay's Christmas-themed book is their description of the Robertsons' tradition of gag gifts.

Did you ever get a gift that you actually ended up liking?

Miss Kay: "I actually gave [Phil] some horrible pants that I found at a used store. And I thought they were so funny, but the joke was on me because he wore them Sunday morning to church."

As for that memoir of Bill Clinton Phil received one year, that turned out to be not so useful.

Black Friday may be a holiday must for American families, but it isn't exactly Phil's forte. He shared how today's commercialism has convinced him to never shop, never use a cell phone, and never turn on a computer. He is, as Miss Kay defined him, a "pioneer man."

Phil's humility can be explained, in part, by knowing what it means to be poor.

I appreciated in the book when you mention there weren't always that many presents under the tree. What are you thankful for especially this year?

Phil: "Well Miss Kay's favorite line is, she says, 'Phil, I've been poor with you, and I've been rich with you.' She said, 'Trust me, rich is better.'"

Kay: "Now let me explain that. You know what, back in the bad days when Phil was acting like an idiot, really. Sorry to call him that, but that's what he was. And he'll admit to it too. And we had so few things. It was so nice because I didn't have to worry about the bills, because he was oblivious to everything like that. So, you know what, nowadays what we love, it's not what we get, but what we can give other people in need. That's really a joy and a blessing to us that we can help people out."

One of their favorite ways to serve is delivering blankets, gloves, and hats to homeless people.

Phil: "One thing you might need to remember in all of this, I asked Miss Kay one time I said, 'Miss Kay, I have a question for you: Once you get rich, when do you begin to feel like you're rich because I don't feel anything yet.' She said, 'Well, since you were perfectly content back when we didn't have much, I don't think you're ever going to get a feeling like, boy look at the money we're making now.' One good thing to note is I have often said to many audiences I speak to, I always tell them, all the fame in the world cannot remove your sin and all the money you'll ever amass, it cannot raise you from the dead. So, I tend to keep things and all the Robertsons in proper perspective."

Phil and Miss Kay are a testament to that because, despite their new fame and fortune, they never strayed from their humble abode.

"Miss Kay and I still live in the same house down by the riverbank," Phil proudly said.

"The kids have big homes and said, 'Dad, what are you going to do?' I said I'm not going to do anything. I'm good to go. It's just me and your mama now.'"

"And the dogs," Miss Kay added.

"We're just going to ride it out down on the riverbank," Phil continued. "Look, we have color TV, washer, dryer, microwave oven. Hey, what else could you want. The roof doesn't leak."

Phil: "Listen, a lot of people say well why do you make such a big deal? The reason we do is, out of all the individuals who walked on earth, our calendar is based on just one of them. We count time by Jesus of Galilee. So, if you think about it, I'm like, whatever He did must have been large. To us, it's God, creator of the universe, being flesh. He took our sins away on the cross. All He asks is we love Him and love each other. I just think the world would be better off if we paid homage to Jesus and revered Him only. And love each other. That's all we're trying to do."

Christmas at the Robertsons' looks a bit different than the average American home.

At night, Miss Kay said, it's heaps of crab and shrimp.

This tradition continues for the next two months.

"Right now, it's duck season," Phil explained. "When duck season gets you, all we do is hunt ducks, come back and eat and we sleep. And then we repeat that for two months. What do you think? It's a pretty good life, I think!"

When I mentioned that, as a New York girl, this schedule was foreign to me, Phil promised, "We would be patient with you."

I couldn't help thinking your book would be banned in some circles today. Saying 'Merry Christmas' is now seen as insensitive and mistletoe is being banned on college campuses. What do you have to say about today's politically correct culture?

Phil: "Well we're just trying to infuse a little good into our culture and Christmas is a wonderful time to remember that. Our culture today, for lack of a better term they've just become so inward-focused, so selfish. Let's face it, we live in a pretty wicked and adulterous generation. We're just trying to infuse a little good into the culture saying come on, love God and love each other. We're just trying to get people to turn from their sins. Look, I used to get with the dope-smoking worst of them. But once I was delivered from that, that was my idiot phase.  So basically, it's called repenting the scariest word in the English dictionary. You never hear about it anymore, but trust me, everyone needs to repent and turn to God, they really do."

Phil shared a somber truth about the state of culture today, where faith is constantly under attack.

We ended our conversation on a lighter note.

What was the most enjoyable part about writing a book together?

"I thought it was pretty cool," Phil said. "Miss Kay is the most gentle, kind, never boisterous, serving. She treats me like a king."

We didn't hang up without Phil and Miss Kay insisting if I came down to Louisiana theyâ€™d "get the New York out of me" and put some "redneck blood in me."

TOPICS: Culture/Society
KEYWORDS: christmas; duckdynasty; faith; hillbillies; philrobertson
The rest of the title is He Has to Have Armed Men Behind Him Just To Give a Bible Lesson
1 posted on 12/13/2015 12:11:01 PM PST by Kaslin
[ Post Reply | Private Reply | View Replies]
To: Kaslin

> “One good thing to note is I have often said to many audiences I speak to, I always tell them, all the fame in the world cannot remove your sin and all the money you’ll ever amass, it cannot raise you from the dead.”

It’s easy to forget that young folks are always in need of hearing wisdom like this.

Off-point, perhaps, but I just got into a fight on the AARP website when I printed out a great recipe from one of the Duck Dynasty wives (sorry, I don’t watch the show). It turned out that great recipe for smothered pork chops - which this Yankee has made several times - brought out elderly gay and lesbians who vilified both AARP and these guys for using their 1st Amendment rights. These creeps never give up - not even on a page of recipes!

I think I’ll buy that book.

“The reason we do is, out of all the individuals who walked on earth, our calendar is based on just one of them. We count time by Jesus of Galilee. So, if you think about it, I’m like, whatever He did must have been large.”

Yep, sounds good to me.........except the first and only time I ever duck hunted was with my then girlfriend's father and he directed me to take the wide canoe over to the edge of the bull rushes then lay out the decoys while he took his boat around to the other side.

No sooner did I start dropping the decoys that the canoe flipped and into the water I went........35 degree temp with probably a 25 MPH wind, That was the end of that.....LOL!