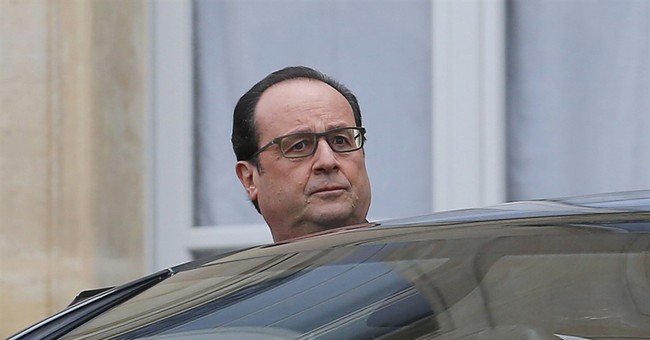 resident Obama's reaction to the horrible terrorist attacks in Paris has been strange - and disturbing.

Instead of rallying the country and calling for the United States to lead the fight to wipe out the Islamic State, what did he do first?

He took pot shots at Republicans for their reluctance to open our borders to thousands of Syrian refugees.

He even said some Republicans were helping ISIS recruit new fighters by suggesting that the United States should give preference to Christian refugees over Muslims.

We're stuck with Obama and his failed leadership for another 13 months.

Meanwhile, we'll have to hope that Francois Hollande of France and Vladimir Putin of Russia can lead a coalition to victory over the Islamist extremists.

Unlike Obama, President Hollande reacted to the Paris attack like a real leader.

He immediately called it what it was - an act of war perpetrated by terrorists - and he promised the whole world that his government would not let ISIS get away with it.

"I want to say we are going to lead a war which will be pitiless," Hollande said as he toured the music hall where more than 100 of his countrymen and women were slaughtered.

"Because when terrorists are capable of committing such atrocities they must be certain that they are facing a determined France, a united France, a France that is together and does not let itself be moved, even if today we express infinite sorrow."

Obama did not seek to unite America after Paris. He sought to divide it.

He didn't promise to make the Islamic State pay for Paris or any of its earlier atrocities and war crimes.

The mass murders in Paris and the blowing up of a Russian airliner finally woke up Hollande and Putin to the threat posed by ISIS.

What will it take to wake up Obama?

His policy towards ISIS reminds me of detente, the foreign policy practiced by Republicans and Democrats alike during the Cold War.

Detente is the French word to describe the easing of tensions and hostilities between the governments of the United States and the Soviet Union.

What the policy of detente meant in practice, however, was not exactly something to be proud of if you were a freedom-loving American.

It basically said to the Soviets - and other totalitarian countries - that we don't care if you torture or imprison or mistreat your own people as long as you don't do anything to harm us.

Detente with the Evil Empire was OK with both parties and it would have continued for God-knows how long except that my father came along in 1980.

Shortly after his inauguration, when he was asked what his foreign policy was vis-a-vis the Soviets, he shocked everyone in Washington.

"We win. They lose," he said. That was his "radical" position from Day 1 and he stuck to it.

He didn't say how he was going to achieve victory over Communism or how long it would take, but eight years later the Berlin Wall came down.

President Obama has been practicing a form of detente with ISIS.

As long as you are only slaughtering and enslaving people over in Syria and Iraq, he seems to have been saying, we'll just bomb you here and there but we won't try to destroy you.

Well, ISIS is no longer just "over there." It's in Paris and Lebanon and Egypt and it's certain to be coming soon to our backyards.

Obama says what he is doing is the right way to defeat ISIS, but that it'll take a long time.

He says we Americans have to stay the course, yet he is unwilling to change his failed course and assume leadership in the fight against terrorism.

Once he does that, his foreign policy should be real simple. "We win. They lose."