In case you missed it -- and you probably did, by design -- the Democrats running for president debated in Iowa on Saturday night. Bernie Sanders once again declined to address the issue of the expanding federal investigation into Hillary Clinton's improper, unsecure, national security-compromising email scheme, confirming that he has no serious intention of winning the nomination. Martin O'Malley is a polling asterisk. So these debates can only hurt the party's presumptive nominee, aside from perhaps giving her a few reps, which is why the next debate is slated for the Saturday before Christmas. past and present assessments of the terrorist force prove otherwise. Clinton also refused to identify the threat posed by groups like ISIS and Al Qaeda as related in any way to Islam. While it's true that the Bush administration similarly sanitized its language on this front, the Obama/Clinton regime has taken euphemisms to another level -- from "overseas contingency operations," to "kinetic military action," to "man-caused disasters," to "workplace violence." That Hillary won't clearly identify his scourge is especially jarring in light of her infamous comment from the previous Democratic debate:


One thing that Democrats do seem to agree upon is that climate change is a meaningful contributor to the spread of international jihadism. This is risible on its face, yet they repeat it with with deep conviction, pointing to government studies that have concluded that global warming "aggravate[s] existing factors" within an already-unstable region. As the theory goes, the ripple effects of rising temperatures make it more difficult for governments to provide for basic human needs, thus breeding resentment and anger. But this fails to account for the thousands of European nationals have left their stable, prosperous Western countries to join ISIS' ranks, driven by religion and ideology -- which are the actual root motives behind Islamic extremist terrorism. Voters should think very carefully about whether it's wise to elect leaders who are unwilling to accurately label the causes and practitioners of jihad, but who are more than happy to peddle the climate change story. Priorities, etc. Setting all of that aside, and passing over Hillary's terrible spin about a law specifically named the 'Affordable Care Act' by its proponents, her worst answer of the evening may have been this one:

Clinton claims she received Wall Street donations because of 9/11
Notice how she kicks off this answer about accepting massive Wall Street donations while claiming class warrior status by mentioning that a majority of her donors are women, prompting a wave of 'girl power' applause from people who seem to think this factoid is somehow significant. (Make no mistake: When she's in trouble, she and her allies have shamelessly played, and will continue to shamelessly play, the woman card). Then she transitions into indignantly asserting that the reason she's raked in so much Wall Street cash is because she represented New York on 9/11. She practically argues that taking in major contributions from the Goldman Sachs set is a way to "rebuke the terrorists." How unseemly. The journalists who were paid to watch the weekend forum were not impressed:


That 9/11 response is going to come back to haunt Clinton in the coming days. Not necessarily for the long run, but won't be met well in NY Maggie Haberman (@maggieNYT) November 15, 2015

Folks, Hillary's earlier answer on Wall Street donations -- linking them to 9/11 -- was cray-cray... and will haunt Glenn Thrush (@GlennThrush) November 15, 2015

Former Clinton Campaign Manager Won't Defend 9/11 Reference To Defend Wall St Ties
Politico also fact-checked Clinton's overall claim about financing her campaign through small, grassroots donors. I'll leave you with a remark that no doubt caught the attention of Marco Rubio, Ted Cruz and other Republicans angling to frame the 2016 election as a battle between fresh faces and ideas and a polarizing Beltway fossil: 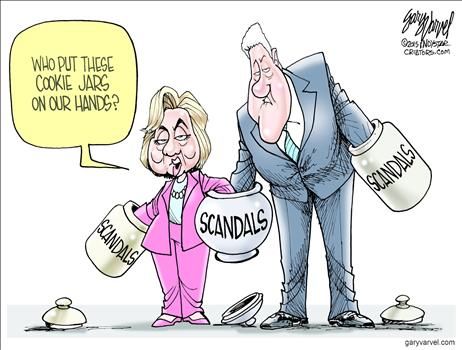 I heard her words on the Chris Plante show this morning. Absolutely stunning!!!! If any Repub had said something this stunningly insane, his or her career would be OVER!!! Buried in an avalance of scorn and ridicule.

Give a listen, and check out how she tries to sound passionate and defiant in that God-forsaken, testicle-shrinking screech of hers.

The Clinton Criminal Enterprises is the perfect name for these low-class Trailer Trash vermin...

Instead you just let the Muslim Brotherhood have small bits and pieces of intel like the location of Extortion 17 through your MB connected aide, Houma Abedin, right? That was no damn coincidenc or luck. None at all. They would have had to know the flight path and you know it beotch.

boy that’s a big plus for her campaign??

6 posted on 11/16/2015 10:20:35 AM PST by MeshugeMikey ("Never, Never, Never, Give Up," Winston Churchill ><> GO CRUZ!!!!)
[ Post Reply | Private Reply | To 1 | View Replies]
To: Kaslin
With regard to Benson's point about Hillary's, as well as the other candidates' refusal to identify the "threat," they are just following their leader who, even today, when given opportunity to identify and contrast the ideological roots of America's principles of liberty and individual pursuit of happiness, as stated in our Declaration of Independence, with those ideological roots which motivated every terrorist who has attacked us and others of Western thought, he took that opportunity and, before the entire waiting world, in pitifully small halting, faltering, words and phrases clearly designed to defend his own 7-year record, wasted the moment.

What a missed opportunity!

8 posted on 11/16/2015 10:22:41 AM PST by SunkenCiv (Here's to the day the forensics people scrape what's left of Putin off the ceiling of his limo.)
[ Post Reply | Private Reply | View Replies]
To: Kaslin
"This new learning amazes me, Sir Bedevere. Tell me again how sheep's bladders may be employed to prevent earthquakes."

Hey Hillary: We have a LOT of Veterans of the War on Terror, how come Wall Street isn't giving THEM money to keep the terrorists from winning?

Wait. I thought they did win

Abedin: Have you been going over her calls with her {Hillary}? So she knows singh is at 8? [India Prime Minister Manmohan Singh]

Hanley: She was in bed for a nap by the time I heard that she had an 8am call. Will go over with her

Abedin: Very imp to do that. She's {Hillary} often confused.

Yeah, a Republican's career would be over for the above too... Must be nice for dems to have a corrupt press at their back... jerks.

I think the jihadists must’ve attacked because a fictional character in a look forgotten paperback book from the 1950’s wore a blue shirt instead of a green one.

Was there a giant leap in the ratings? Did any of them say anything stupid?

“Twas brillig, and the slithy toves. Did gyre and gimble in the wabe”

I’m sure there will millions watching (sarc)