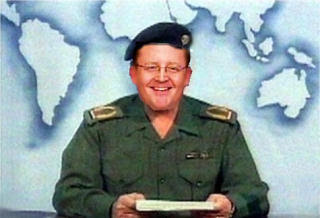 McDonald's hired our old buddy Beltway Bob ... formerly the head liar for Obozo ... to flog its Bad Mac burgers and wretch fries ... a job for which he is well qualified cause he can say just about anything and keep a straight face!

Couldn’t have found a more qualified fat-ass to help launch yet another place to boycott.

Thanks, Mickey D, I think we’ll give OURSELVES a break today, and every other day, too.

This is a joke, right? Is it April 1st again?

If he says it’s a quarter-pounder, better check.

Those words struck me too. This guy will deliver clear concise communications? The same way he did when working at the White House???

Oh, dear. I only eat at McDonald’s twice a year, but I’d hate to give up my biannual Big Mac and Fries!

In any case, since I don’t watch TV, I’m unlikely to hear this guy spreading the word. I never did, except in FR transcripts, while he was shilling for Obie Hussein.

10 posted on 06/09/2015 9:59:51 AM PDT by Opinionated Blowhard ("When the people find they can vote themselves money, that will herald the end of the republic.")
[ Post Reply | Private Reply | To 1 | View Replies]
To: Zakeet
He shares so many characteristics with the official McDonald's mascot, I'd swear they were twins. 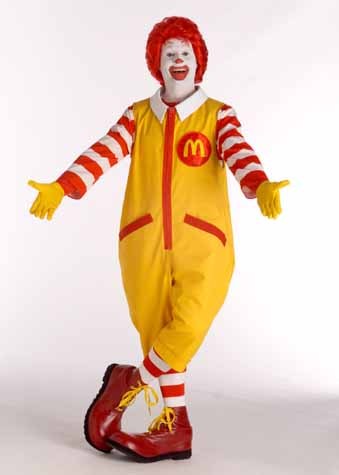 The new MCD CEO seems like a flaming big government loving liberal so I’m not surprised.

The real problem with MCD is the food.

A six figure job plus perks for the ability to lie with a strait face. I’ll bet the management of McDonald’s has been totally infiltrated and is now totally controlled by leftists. They are in the early stages of financial problems.

It worries me that they need a flim-flam man.

They are sounding desperate.

“He will lead McDonald’s in communicating clear, coordinated messages to internal and external constituencies, enhancing the brand and supporting corporate strategies.”

Well played, McDonald’s! Your apparent foray into comedy is off to a roaring start!!

“A six figure job plus perks for the ability to lie with a strait face. I’ll bet the management of McDonald’s has been totally infiltrated and is now totally controlled by leftists.”

It is a Chicago based corporation and certainly its senior executives have been involved in Chicago politics and the Chicago way for decades.

The board of directors has been dominated by corporatists and leftists for more than two decades. When Ray Kroc, the man who built McDonalds into the leading fast food company and dominant burger maker in the world, died in 1984 his wife came out of the closet as a flaming liberal giving much of the fortune to leftist causes.

Many American corporations follow the same path. A product visionary and customer service oriented founder/CEO builds a brand. As soon as he is gone from the scene the financial and legal paper pushers take over the executive suit and shift the focus from customers and product to playing the Wall Street game and cutting costs.

The story always ends the same way. A few years of enhanced sales, profits and executive bonuses before the cost cutting and falling employee morale result in declining product quality and customer service. Then the “turnaround” when the product value proposition is commoditized (think the dollar menu) in a desperate attempt to drive sales. Then more cost cutting and the death spiral accelerates. We can see the same thing happening at Sears and Kmart today.

Ray Kroc once said, ““If I had a brick for every time I’ve repeated the phrase Quality, Service, Cleanliness and Value, I think I’d probably be able to bridge the Atlantic Ocean with them.” Ray Kroc’s success formula is as valid today as it was when he was building the company and as demonstrated today by Chick fil A, Five Guys, Panera Bread, and other restaurant competitors. Unfortunately the beancounters and lawyers who control most corporations don’t work in or visit the stores, don’t understand product quality and have no concept of value for the average American with whom they have nothing in common. If they did, the turnaround would already be accomplished.


Me too !
Better to suffer the slings and arrows and trots from Taco Hell !

18 posted on 06/09/2015 10:47:09 AM PDT by Tilted Irish Kilt
[ Post Reply | Private Reply | To 5 | View Replies]
To: Soul of the South
I agree with you. In general the men of ability and vision start and manage the company until they die; Ford, Hughes, Edison, Rockefeller, Duran, J. P. Morgan etc. Their companies are taken over by “managers” who never started anything and who do not know the workers. My Uncle, now deceased, worked for a large aerospace firm as a technician(they made him and engineer just before he retired)The company was still run by one of its founders who worked with my Uncle from the 1930’s and knew him quite well. One of the new managers saw my Uncle reading a newspaper in one of their aircraft and screamed “fire that man.” The guy did not know that reading a newspaper is an approved way of checking the lighting. My Uncle went up to the President's office and said Hello(name eliminated) who said Hello Roy what can I do for you? Roy related what happened and was told “don't worry about it.” The company President knew his workers having worked with them all his productive life. He knew, based upon personal knowledge, of my Uncle's competence and integrity. Today's “managers” rarely know their people and everything suffers because bureaucracies come into being in a forlorn attempt to create the early days of real men doing real things.
19 posted on 06/09/2015 10:55:53 AM PDT by AEMILIUS PAULUS
[ Post Reply | Private Reply | To 17 | View Replies]
To: Zakeet

They would have done much better to have avoided this crap, and just brought back beef fat fried fries.